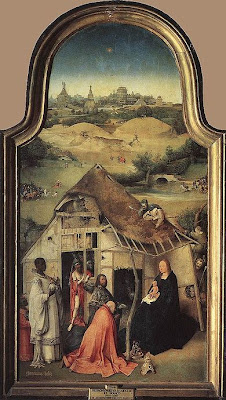 Normally we have about 25 people for weekday Mass. I advertised that we were going to celebrate Mass according to Missal of Blessed John XXIII, warned people it would take a little longer than normal.
It was the first time I celebrated the Traditional Latin Mass without an opportunity for a Novus Ordo alternative, in part because my reading of Summorum Pontificum is that the Classical Roman Mass should be a normal part of parish life and because I wanted to celebrate the feast of the Epiphany on the proper day.
I was surprised we had forty people turn up, many were younger than our normal congregation. I think people found it a deeply prayerful experience. One or two asked if we could have a sung Mass.
at January 06, 2009

Snap - I too offered the TLM at St Patricks this lunchtime. Not many attended sadly.

A happy Feast of the Epiphany, Father, and congratulations (if that is quite the right word) on another "old" Mass.

Yes, I am sure the intention of Summorum Pontificum is to reintegrate the old Mass into parish life. It can only be an enrichment. I wish more people could see it that way. Oh well, give it time, I suppose.

Today, I put the Magi in my crib, where they will stay until Candlemas.

P.S. I've only just read the comment by Fr. Paul Harrison, and I hope he does not feel too discouraged by the lack of numbers. Things will get better !

Happy I was to attend the TLM Epiphany Mass at St. Bede's Clapham. Perhaps 150 people of all sorts. Please don't be discouraged Father Harrison.

Father Ray - you mention that the intention of the SP is to reintegrate the TLM into the life of the Parish.

Today with the one Mass was perhaps the start. People like familiarity and if the TLM is in addition to the NO, then the average pew person may be reluctant to change to another Mass.

However, if they wish to attend Mass on a particular day and there is just the one which happens to be a TLM as today then they are introduced to it as the 'norm'- even if it is the extraordinary norm.

I was intrigued to see on a recent website comments from a priest in the Diocese of Belley-Ars in France. He celebrated two Sunday Masses recently - one had just 19 people in the congregation all described as being of the third age. That was the 10 o'clock. At 11.30 he celebrated the second at which over 90 were there of all ages including teenagers, children and families.

The first was a NO in French the second a sung Latin Mass. If I remember rightly the priest described this as the fruits of the EF.

Yes it is true that those of us who remember, know and love the Old Mass will try and attend whenever possible. However in order that others may learn to know and love it, it will one day have to be seen not as an addition but as a normal alternative to the NO. As PeterHWright says this can only be an enrichment.

Today, I put the Magi in my crib, where they will stay until Candlemas.

Peter - that is very comforting to hear. It is good to know that someone still observes these traditions.

I celebrated the Epiphany on its proper day, 6th January, in the Newer Use. There is no need to make it Usus antiquior, or even Latin, desirable though this is. Sauce for the goose is sauce for the gander.

A truly significant milestone Father and one which I am sure will lead you to even further bold steps in time. One of the greatest obstacles which the TLM faces is understandable ignorance among Catholics who feel either it is disloyal to attend it, or they don't see the point because to them it is "the Mass in a foreign language with the priest with his back turned".

Much as the hierarchy would like to see it still conducted in secret like an AA meeting, if its return can be accompanied with words of encouragement to the parish from the priest to give it a try, some orders of service specifically aimed at the first timers, and some catechesis on what participation at the TLM involves (possibly by way of short address to the congregation before Mass begins), the Holy Spirit will do the rest. What many first timers will discover is that it is the first time in a long time that they have actually prayed at Mass, and their subsequent participation in the NO will never be quite the same again but will be enriched by the experience.

Wish I could've gone to Mass on Tuesday. We didn't even have one. :(

As I have learned more about the liturgy, and how we ended up where we are today, the violence done to the the liturgical calendar seemed very bone-headed indeed.
But this year, I was able to see God "drawing straight with crooked lines," as I had no obligations to my parish job when those who celebrate the Extraoridnary Form recognized All Souls and Epiphany.
Thus, I was able to see, hear, and participate in beautiful, beautiful, life-giving Masses on those two holy days.

That is all very well and good but there are those, who dedicated to the ordinary form, will say that you are disobedient to your bishop and causing division.

The fact is that after 45 years of the Novus Ordo, it is already at the end stages of collapse. The traditional rite, no matter what obstacles bishops or even a pontiff may put in front of it, will be the rite of the future. As the late Michael Davis once said, "It is the Mass that won't die".