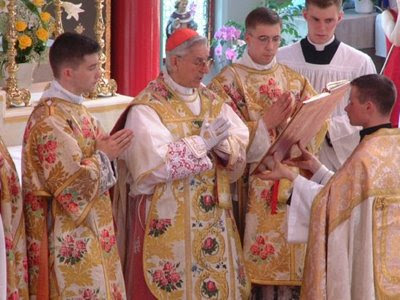 Our 10am Mass is TLM for the Feast of the Epiphany.

The Catholic Herald, the main ‘conservative’ Catholic paper, publishes the full weekly calendar for the Extraordinary Form alongside that for the Ordinary Form. This is provided for them each week by Gordon Dimon, the LMS’s Senior MC, who also compiles the LMS’s annual Ordo which is used by priests worldwide.

More surprisingly, The Tablet – the main British journal of ‘liberal’ Catholicism – also runs a weekly link to the Latin Mass Society’s website (http://www.latin-mass-society.org/) where the full Ordo can be consulted (along with much else of interest to enquiring Catholics).

John Medlin, LMS General Manager, said: “I was pleased at how responsive both The Catholic Herald and The Tablet were to my suggestion that they acknowledge the calendar for the Extraordinary Form. It shows that the Extraordinary Form is becoming accepted for what it is – a rite of equal standing with the Ordinary Form. The other two main British Catholic newspapers – The Universe and The Catholic Times – have yet to catch up with the Herald and Tablet. I will keep prodding them!”
at January 05, 2009

Good to see, in spite of recent 'difficulties' that the LMS is alive and well!

It seems a lot of fuss really over not very much.

Essentially the two forms of the reformed rite have a calendar that, structurally at least, is very similar.

After the Circumcision both have ferial days of Christmastide and after the Epiphany both have ferial days of Epiphanytide - neither of which exist in the Tridentine Rite. Of course, moving the Epiphany will have an impact but the basic difference will be the 1970-2002 form will have next Sunday as the Baptism of the Lord whilst 1962 form will have the Holy Family then. Apart from that very little differnce.

of course it's quite impossible for an extraordinary use to have the "same standing" as an ordinary rite, and the Holy Father made this quite clear in SP. Mr Medlin is guilty of counterknowledge.

I wonder for how much longer there will be two calendars, and I wonder how much further the novus ordo calendar will diverge from the 1962 calendar.

The thing to do is abolish both calendars, restore the 1920 edition of the Roman Missal, and use the pre 1955 calendar, complete with its ancient Octaves.

What of the novus ordo Mass ? Oh, let them keep it (for the time being). But I can't see why it needs its own calendar.

"The thing to do is abolish both calendars, restore the 1920 edition of the Roman Missal, and use the pre 1955 calendar, complete with its ancient Octaves.

What of the novus ordo Mass ? Oh, let them keep it (for the time being). But I can't see why it needs its own calendar."