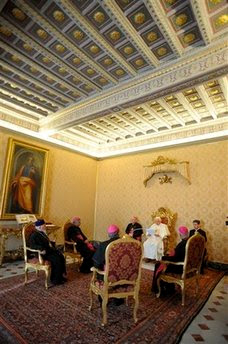 In this picture made available by the Vatican newspaper Osservatore Romano, Pope Benedict XVI meets with Iran's bishops at the Vatican, Friday, Jan. 16, 2009. The Pontiff has said that Iran should work for peace in the Middle East and urged Catholics in the country not to emigrate and to cooperate with the Islamic regime. Benedict did not mention the tensions over Tehran's nuclear program and the country's role in Middle Eastern conflicts, but said Iran should become a force for peace in the region. In a speech to Iran's bishops, the pope said he was sure the country would 'not fail to follow this vocation.''
at January 16, 2009

Thank God somebody is talking to Iran.These are dangerous times for Iran.It is a fair bet that they are going to be targeted next.

The only chance for Peace in the middle east is to talk to the richest and most influential country.

Embargoes and sanctions only lead to events like "Pearl Harbour".

Gee, I wonder if he would have advised the Jews to stay put in the 30s in Europe....

I visited Iran a few years ago. What a wonderful place, and people. I echo nickbris and thank heaven that there is some form of dialogue possible. As was shown in Northern Ireland, and in eastern Europe, in the end it's only solved by talking to each other, so the sooner that's done the better.

If only the Pope would bring moral pressure on to the USA to cease its proactive support of Israeli violence against the Palestinians.

I see there is a demonstration for peace in the Middle East taking place today. Let us hope that it will not show its committment to peace by injuring policeman and smashing windows of coffee shops. Let us also hope that demonstrators will not carry a banner showing Jews eating children. Perhaps also the demonstrators might visit some Arab embassies asking them to urge Hamas to stop firing rockets and recognise Israel.

As for Iran the EU has been talking to it for the last two years. Iran too is dedicated to the destruction of one of its neighbours, and the subversion of others.

The Pope's spirit of goodwill and charity could solve their problems, but it is sadly lacking when people emerge from their prayers shouting "Death to America" or "Death to Israel".