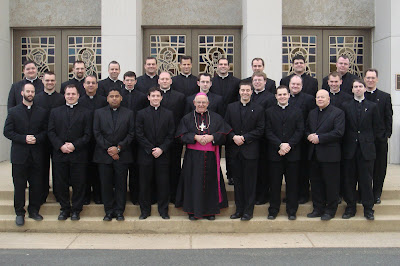 Anyone interested in the formation of future priests should look at the report of the Congregation of Catholic Institutions into the US Seminaries. http://www.usccb.org/cclv/final_report.pdf
The Visitation of course followed the sex scandals which did much damage to the Church in the US but the scope of the visitation was much broader than that. On the whole the report is very favourable, at least about diocesan seminaries, those of religious orders seem to be less satisfactory, though few details are given in this public report, presumably there are also detailed reports on individual institutions.
What struck me, from a qick read through of the twenty page document, were the following:

The realization that many seminarians come from backgrounds which are far from Catholic, therefore the need to screen seminary candidates for irregularities and impediments at the beginning of formation.
An “incomplete grasp” of the difference between the ordained priesthood and the priesthood of the laity.
The teaching of Moral Theology is often defficient, and at times is not within the mind of the Church. Faculty who subvert the Church’s teachings.
The need to clarify the meaning of the "internal forum".
The report questions whether monthly confession is sufficient.
The need to encourage, rather than discourage, traditional spirituality.
The importance of direction and supervision over long summer vocations and free time.
The importance of the involvement of the local bishop in the selection and formation of candidates.

The document speaks of seminarians having "a strict Rule of Life".
at January 16, 2009

As a layperson I'm always totally shocked to find out how these sorts of goings on (moral theology not being taught properly etc...) can happen in a seminary. How exactly is it possible?. Who is interviewing these people?. If the Church was IBM all the Bishops would have been sacked long ago. They can't stick to the "mission statement" to save their lives. As I've said before I think our true Bishops are now running blog sites. These have become virtual dioceses where they can minister to what's left of the flock. Thank God for the internet. Get a copy of "Goodbye Good Men" if you haven't seen it already

I wonder how England & Wales would do. Is there a visitation due here, Father, or does it only happen when there is an apparent crisis?
BLOG ALERT:
Fr. Blake's blog is listed in the Bloggers' Choice '09 Awards. http://bloggerschoiceawards.com/
Go to religious blogs, page 17.
Vote early. Vote often (if they'll let you).

Fr Longenecker makes some comparisons between US and UK seminaries on his blog 'standing on my head', based on his experiences here in the UK some years ago. It doesn't make for easy reading but if Fr. L. is right, then changes probably need to happen, and soon.

Better than "Goodbye, Good Men" is Randy Engel's "Rite of Sodomy" - a book not meant for those weak in faith. Remember, the "corruption of the best is the worst".

'The document speaks of seminarians having "a strict Rule of Life".'

As they always traditionally did!

'The importance of direction and supervision over long summer vocations and free time.'

Of course, this could be obviated by having longer parish placements during the vacations...

I need to read the rest of this, though. Thanks for posting this, Father.

I was at Campion House in the early 80's and the Jesuits and lay staff teaching there had lost the plot in terms of handing down the faith. People forget about the confiteor: actions, words AND omission. There are two issues therefore, firstly lies were often taught and secondly the truth was simply omitted. The most alarming part of the whole process is there no regulation or mechanism to register concerns or complaints from ANYONE.

The BBC Panorama documentary on the Joe Jordan issue at the VEC confirmed that there is no auditing system. With the result that concerns went unexpressed and the hierarchy threw the late Archbishop Ward to the lions. The problem was always the VEC and not John Ward.