Orthodoxy should be radical 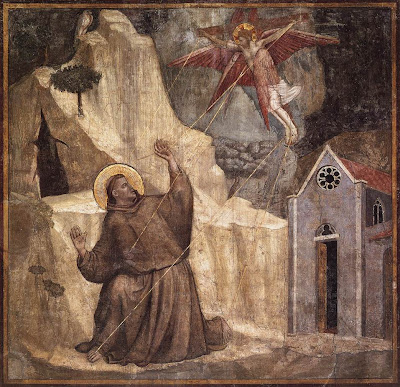 One of the highlights of my time at the seminary, there weren't many, was the course on the Most Holy Trinity, which was taught by the young Fr Michael Evans, now the Bishop of East Anglia.

I remember enjoying and exploring with relish the quote which he attributed to St Athanasius, "You can tell an Arian by he way he treats the poor". I have never actually found this in Athanasius' writings, but the implication is that an orthodox understanding of the Holy Trinity, the correct understanding of the Incarnation leads to something very practical. Orthodox Catholicism should be about living radically, if it is just about quoting the catechism or a certain liturgical style is at best mere historicism, at worst escapism.
I am very suspicious of movements which some might describe as "future -church", which seem to stem from a "social gospel" without a doctrinal foundation. Indeed many of those who espouse the "social gospel" seem to despise the ancient orthodox doctrines. Indeed they would rob Christ of his divinity, and leave him a mere teacher, a figure of the past and they would rob man of Grace, leaving him un-Redeemed, dependant only on himself.
The great saints Like Sts Laurence, Martin, Francis, Vincent de Paul, modern Beati like Damian or Theresa of Calcutta, known for their acts of charity were profoundly orthodox, they believed that God becoming Man gave human beings a new dignity. Baptism calls us into the inner life of the Trinity, to be Sons. To know that through baptism we have become by adoption what Christ is by nature, should be life changing. To know that our relationship with the Trinity involves and compels us to participate in Christ's mission of atonement and salvation. To be conscious of the Grace we have received from God should at the very least compel us "to bind up the broken hearted" and "proclaim the Gospel to the poor".
Catholic Commentary has a provocative post on Traditional Catholics and the pick n mix mentallity.
at January 12, 2009

I commented on the blog owner's post and don't want to have to reproduce it here, so I will summarise.

The post in question has seemed to have attributed an infallibility to the World Day of Peace speech that is not there. It is a dangerous mentality to think that every single word and action of the Pope is protected from error, even outside the norms set out in Vatican I's Pastor Aeternus.

Such logic would mean that it is sin to disagree with the late Holy Father on his views on the capital punishment, Iraq war and approval for things like altar girls.

It was the Spanish theologian at Trent, Melchoir Cano O.P, who said:

"Peter has no need of our lies or flattery. Those who blindly and indiscriminately defend every decision of the Supreme Pontiff are the very ones who do most to undermine the authority of the Holy See—they destroy instead of strengthening its foundations"

"Peter has no need of our lies or flattery. Those who blindly and indiscriminately defend every decision of the Supreme Pontiff are the very ones who do most to undermine the authority of the Holy See—they destroy instead of strengthening its foundations"


We can go the opposite extreme, extremes are always dangerous and undermine orthodoxy.

Yes Fr - there is always a danger of going to the other extreme. But I believe that God has given us all the intellect to distinguish between private opinions and what is objectively correct and for the good order of things.

I still maintain that "papolatry" is something to corrected. It has been responsible in part to the modern crisis in the church today. It began with the Pius IX mentality of "I am Tradition!" and was most obvious with Paul VI, who thought as Pope he could innovate and cast aside what was previously held as sacred and correct.

Agree, I think Pope Benedict would too.

Thank you for a post that I found a very good complement to mine.

Right on, I fully agree...As I often say, I truly don't disagree with Church teachings, I merely disagree with the lex vivendi part of it in some situations. Example: The Church has no power to ordain women, yet has altar girls. It's not that the functions can not be performed, the Theology is undermined when we allow them.