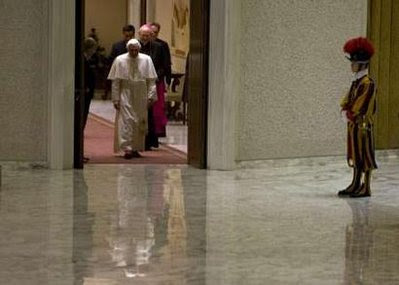 Apparently the fall in the dollar, the rise in the Euro has hit numbers attending Papal audiences. Yesterday the Holy Father spoke about St Paul and worship.

(Zenit.org).- It is only in communion with Christ that Christians can offer God true worship, says Benedict XVI.

The Pope explained this today during the first general audience of 2009, in which he resumed his catechesis on St. Paul. 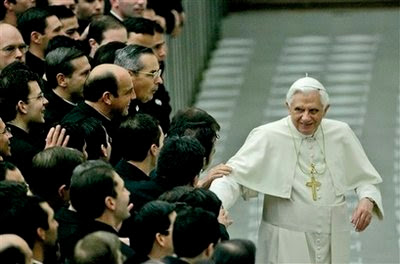 Speaking in a hoarsened voice after days of intense schedules during the holiday season, the Holy Father offered a lengthy explanation of the Pauline concept of "true worship," as it is explained in three passages of the Letter to the Romans.

Referring first to a reference Paul makes to a rite in the Old Testament, the Pontiff noted how the sacrifice of animals as expiation for human sins could never be sufficient.

"A more real contact between human fault and divine love was necessary," he said. "This contact has taken place with the cross of Christ. Christ, Son of God, who has become true man, has assumed in himself all our faults. He himself is the place of contact between human misery and divine mercy; in his heart, the sad multitude of evil carried out by humanity is undone, and life is renewed." 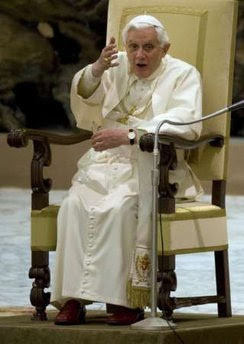 St. Paul speaks of this fundamental change in worship, explaining that "with the cross of Christ -- the supreme act of divine love, converted into human love -- the ancient worship with the sacrifice of animals in the temple of Jerusalem has ended," the Pope said. "This symbolic worship, worship of desire, has now been replaced by real worship: the love of God incarnated in Christ and taken to its fullness in the death on the cross.

Nevertheless, this spiritual worship has a prerequisite, the Bishop of Rome explained, and it is union with Christ.

"Paul," he said, "always supposes that we have come to be 'one in Christ Jesus,' that we have died in baptism and we live now with Christ, through Christ and in Christ. In this union -- and only in this way -- we can be in him and with him a 'living sacrifice,' to offer the 'true worship.'"

By taking on human nature, Christ is able to do for man what sacrificial animals could not, Benedict XVI affirmed.

"The sacrificed animals should have substituted man, the gift of self of man, and they could not," he said. "Jesus Christ, in his surrender to the Father and to us, is not a substitution, but rather really entails in himself the human being, our faults and our desires; he truly represents us, he assumes us in himself.

"In communion with Christ, accomplished in the faith and in the sacraments, we transform, despite our deficiencies, into living sacrifice: 'True worship' is fulfilled." 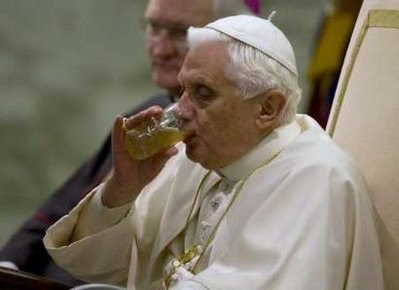 Although I enjoyed the joke about the Fanta, I think that glass contains a pretty powerful medicine.

You say the hoarse voice is a result of the recent heavy schedul. One report says he is fighting a cold (dangerous for him because of his tendency to get bronchitis -my parentheses); and another that it's the effect of Roman weather conditions at this time of year.

My husband and I thought he looked pretty groggy at the midnight Mass of Christmas and hardly better at the Urbi et Orbi. Since then he appears to have rallied. We know a cold takes about 10 days to incubate, and then after a couple of days feeling really rough, with certain types of infection it sets in with sore throat and loss of voice before the streaming nose and all the rest.

Today's catechesis on the Pauline texts was wonderful, but his homily for the Epiphany.......! Even though I heard it live and have a reasonable understanding of Italian, can't wait to have the English translation so that I can savour it and study it. In the meantime thanks for the extracts you published.

Deo gratias that He has given us this Pope....

Your comment about the Holy Father's hoarse voice and Jane's further obervations on his health are bound to raise worries about the effects of age on this wonderful, God-given man. I don't know how he accomplishes a fraction of what he does at his age. I hope his advisers are looking back at what Pope Leo XIII did as age advanced to get some clues about how he can consolidate his strength. Many of us are praying that he will live for as long as him.

I think that we are safe.

He has his pinkie raised while he drinks!

Please pray for him at least once a day

The Pope and Fanta - not something to joke about, since it was created for the Nazis as a substitute for Coco Cola by zionist!

Epsilon,
I don't think there was a Nazi department for the developmemt of Fanta, better to say it was developed in Germany during the 1930s. Not everything from then in Germany was Nazi!
Members of the Papal household are reported as saying the Pope prefers this beverage to alcohol, especially at lunch. Just as Pope John Paul preferred, what he called, "American champagne", coke, to anythin intoxicating!

A note of caution to those who drink Coke and Fanta and other "soft" drinks - when workers in South America, India and Africa protest poor wages (less than $2/day) they are liable to be shot at or incarcerated, and their basic water supplies dangerously depleted in the production of these drinks.