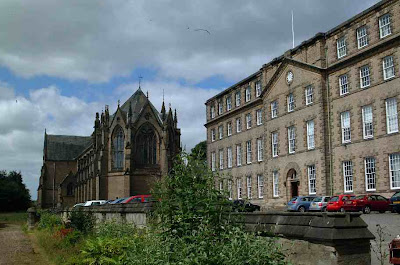 Now, wasn't there a certain rumour running around the net a few months ago?

The Latin Mass Society of England and Wales (LMS) is organising a residential training conference for priests wishing to learn the Extraordinary Form of the Roman Rite (Traditional Latin Mass) at Ushaw College, Durham, one of England’s most prestigious seminaries.

The conference will run from Monday 20 April to Thursday 23 April 2009 (i.e. Low Week) and will feature Traditional liturgies in Ushaw’s magnificent neo-Gothic St Cuthbert’s Chapel together with a Gregorian Chant schola and polyphonic choir.

Expert tuition in the celebration of Mass in the Usus Antiquior will be provided on a small group basis. There will be guest lecturers and all participants will receive 1962 Missals and altar cards.

Daily devotions will include Lauds, Vespers, Benediction and Rosary.

The subsidised fee to participants is only £85.00 which includes full board and accommodation. Priests are asked to register by Monday 2 March.

Further details and registration forms can be obtained from the LMS office (Tel: 020 7404 7284) or downloaded from the LMS website, http://www.latin-mass-society.org/

Paul Waddington, one of the organisers, said, “This is the first time the LMS has organised such a training conference in the north of England. I hope the laity will tell their priests about this wonderful opportunity to learn the Usus Antiquior in the setting of one of England’s finest Catholic seminaries.”

The LMS hopes to make a further announcement about a training conference in the south of England in the near future.

One of England's most prestigious seminaries - they're having a laugh! I hope that the Reverend Father's don't trip over the peruvian stoles and bongo drums that litter the sanctuary! The place has one of the worst reputations for teaching priests to celebrate the rites of Holy Mass according to the mind of the Church.

The fact that Ushaw College is to be the setting for this conference illustrates perfectly that things are indeed looking up in these lands!

Priests, deacons and students making each other laugh during Mass

Priests wearing no vestments (over their slacks and striped shirts)

Made up Neo-Pelagian prayers - such as 'Sisters and brothers you ARE worthy to receive...'

Shared 'group discussion homilies' with the lasses and lads present - (e.g. the priest saying - 'I'm not sure whether I believe in angels or not... What do you guys think?')

Not being allowed to kneel - even for the Consecration

The use of crumbling and powdery bread

And all the while St. Cuthbert's chapel lay unused except for Methodist groups to have their communion services or for big feast days/ordinations. Oh, and a few times when trainee female vicars came to dance around the lily pond which had been set up in the church...

No need to continue with this theme because this news is a real blessing! One of the first blog posts we made suggested that the beautiful and majestic Pugin chapel of St. Cuthbert at Ushaw should be used for celebrations of the Holy Mass in the Extraordinary Form - and now this!!!

Perhaps it would be appropriate for the first mass of the retreat to be offered as a Mass of Reparation?

Thanks Father - you've made a formerly broken seminarian a very happy man!
Alan (and Angeline)

Well, the last time I saw a photograph of the magnificent chapel at Ushaw, it was unwrecked.

As far as I know, all they need to do, for a celebration of the "old" Mass is to move the table altar (is it moveable ?) and some modern liturgical furniture out of the way, and this noble building will be a worthy setting indeed for the traditional liturgy.

Do you know of anything similar being held in French or German, Father? I know a priest who I think is quite persuadable, but I think he'd be more comfortable in either of those languages than in English.

I hate to be a party-pooper, but I wonder if Ushaw's willingness to host the LMS has is more the result of the need to generate revenue in the Credit Crunch than a genuine conversio morum. I wonder if any seminarians (assuming Ushaw still HAS any seminarians) will be allowed to attend and what will happen to them if they do?

Mr Bumble would sooner allow Oliver Twist to have some more gruel than an English Seminary Rector allow one of his students to study the extraordinary form.

On Auricularius's point, it might almost seem as if it's the LMS that's suffering from the credit crunch. From Merton College, Oxford to Ushaw College, Durham? Dear me!

You may be right, but the two possibilities are not mutually exclusive. The Credit Crunch creates strange bedfellows and if Gordon Brown can make his peace with Peter Mandelson, I see no reason why Ushaw shouldn't do the same with the LMS. Indeed, the recession may be a means by which Divine Providence intends that the Benedictine Reform triumphs over Magic Circle Liberalism.