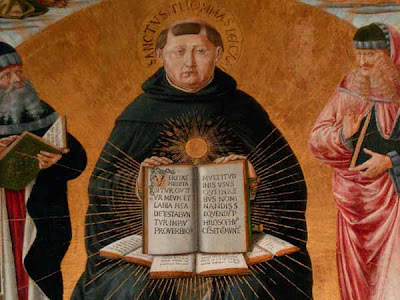 When I was at the seminary set books were Schillebeeckx, Curran, Rahner and Kung. They were read and their arguments put forward by clergy and people alike when I was first ordained, nowadays one seldom hears of them now.
Aquinas, I used to read before I went to the seminary, I read him as a 15 year protestant, I suppose 15/17 was the age of most of the students he taught, so I wasn't precocious.
The intention of modern theologians is to be"cutting edge" to score academic points. It is the nature of even the Catholic university not to orthodox theologians. It's the system.
For Aquinas deepening love of God in the hearts of his young students was paramount, called by his fellows, "the dumb ox" reminds us of the ancient definition of a theologian, "A theologian is one who prays: one who prays is a theologian". Silence and contemplation should be a theologians tools.
Theology is about holiness, knowledge and understanding of God are of no value unless they lead to Union with Him. The work of the theologian should be done on his knees.
at January 28, 2009

"The work of the theologian should be done on his knees." Wow.

someday I hope you'll do a post of your "conversion story" to Catholicism.

I would also love to hear the story of your conversion one day. I can't help but think it providential that you were moved to read Aquinas at the age of 15. It must have worked like a vaccination against infection by Kung and his modernist chums. Did not JP2 excommunicate Kung at one point?

I think all communication with God should be done on our knees. I'm sure that's the reason God gave us knees.
And I for one would love to hear your conversion story. So when you have a moment please grant us this request.

Conversion story: I don't really have one just a series of events, people I met, things I read that made it impossible to not be in communion with the Church.

I read those theologians for my Divinity Degree in the 80s..

I came across a blog of a seminarian for a religious order, Claretan I think, who said that he didn't want to be just a sacramental vending machine!

He obviously 'didn't get' the priesthood.

I replied suggesting that he was thinking of embarking on the wrong profession and asked the name of his seminary. He replied that it wasn't a seminary but a school of theology where they taught 'cutting edge theology.'

I don't know if he persevered.

Amen. Evagrius said it: "The theologian is one who prays; and one who prays is a theologian". Saint Thomas was, in the end, the great silent adorer. In all true theology adoration has the last word. And it goes on forever.

Yeah, Father, but all the same it would be an interesting post!