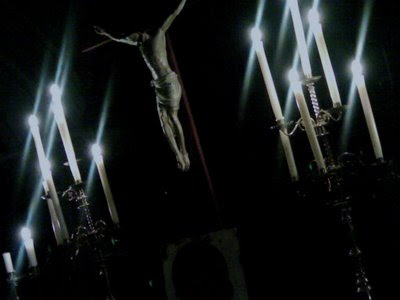 Over at The Bones I spotted this, I was, err, at the same Mass:

The Priest is allowed to be the Priest, mediating and interceding on the behalf of his congregation, with vocal and inaudible prayer and entreaty. His assistant, the altar server assists in the responses during the liturgy.

The Laity are allowed to be the Laity, allowed to be still in the Presence of God, to acknowledge our unworthiness before the Lord and to be able to actually pray without distraction, without having to make responses, even 'Amen', without having to vocalise the pattern of the Mass and to simply be before God. The vocalised responses to the Mass have been taken away, the responsibility to speak has been removed and in comparison to the New Rite, are suddenly left feeling, 'But isn't there something we have to do? Isn't there something we have to say? What am I meant to do?' Yet, now we can be! We don't have to do anything! Now we can pray in the silence of our hearts and seek Him!

And, of course, most importantly, Amighty God is allowed to be Almighty God, without being assailed by the noise of the Laity, without men and women profaning Him by receiving the Blessed Host in the hand, without men and women profaning or demeaning Him by not kneeling to receive, without them uttering the sacred words of the Santcus carelessly or without thought or devotion, knowing that in the Priest He has someone who is worthy by virtue of his Office, to mediate for His people.

Yes, suddenly in the Latin Mass, everybody knows their place, harmony is restored and nobody is seeking to usurp another's role. The Priest as Alter Christo takes upon himself the mediatory role between man and God and is allowed to be the Priest and we the Laity are allowed to be, allowed to pray in the silent majesty of Presence of God.

Sounds like you did good Father, well done and thank you :)

I wish I had the same experience as Lawrence at my first Latin Mass!

IT speaks well of you, Father.

But I always thought his experience was what Eucharistic Adoration was for! different strokes!

Thank you, Father, for giving us the chance to experience it.

Thanks for posting this and thanks also to Lawrence for sharing his experiences.

Most weeks since October we've been attending the Latin Mass and affirm this.

Also, we have found that by following the Mass in the LMS booklets/sheets that we are praying the deeply theological and devotional prayers much more intently. It is a real work of prayer and a very stilling experience. We are also getting better at keeping up with the priest as we go!

The congregation is not massive but there are a few young people and a real sense of prayer, adoration, intercession and devotion.

It is hard to come out afterwards.

God Bless and thank you
Aln and Angeline

Yep, the Latin Mass really is that good!:D

"But I always thought his experience was what Eucharistic Adoration was for! different strokes!"

So your not supposed to adore the Eucharist during mass as well?

It's the same Eucharist.

Err Gem - I'm pretty sure that your old Baltimore Catechism will say what the four ends of mass are:

Googling around for confirmation of the lifting of the SSPX excommunications, I came across a newspaper survey carried out on the 'latin Mass.'

Unsurprisingly the majority were not in favour. And this is a prominent Catholic newspaper in France.

Lawrence's comments were beautifully written and I am pleased that his first impressions were so favourable. I have read that some people need several visits before they feel at home and perhaps Lawrence is the exception.

Once again grateful thanks to you Father Ray for giving us here in Brighton the opportunity to deepen our faith in this way.

Thanks to Fr. Ray for the link to this really excellent meditation on the spiritual richness of the "old" Mass. I wish I had written it. It is very moving, and I agree with every word of it.

It is terrible to think a whole generation has almost no experience of being still before God. Hopefully, things are getting better !

VL: Of course you're supposed to also do adoration at Mass - it's the "not thinking about what's going on at Mass" and just watching the eye candy without paying attention to the prayers said, that I'm not down with. It's one thing to "zone" during Benediction ... I don't think one should zone out on the Mass prayers. Pius XII seemed to indicate it was okay for unlettered people, but better if everyone did follow the prayers.

I had similar thoughts at my 3rd TLM (I was too busy NO ing the first couple of times to catch on)...The TLM teaches humility in the deepest regard. Freedom because you can be you, the priest can be the priest.

Maybe it's because I'm NOT much of a people person I love the TLM, I can concentrate on the mystery of God being made manifest.

I would like to add my thanks to Laurence. Your thoughts are, indeed, most beautifully expressed. Like you I attended my first Latin Mass at St Mary Magdalen and it was an unforgettable experience. I am grateful to Fr Ray that we shall be able to attend the Friday evening Mass every week. Father said at Mass yesterday that he hopes for a young congregation on Friday evenings but I must tell him that even slightly older people can benefit immeasurably, too!