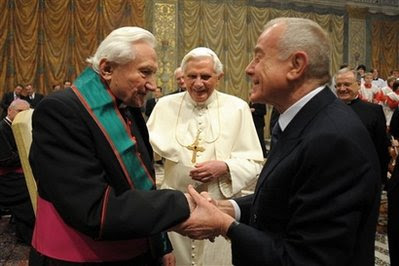 Pope Benedict XVI is celebrating the 85th birthday of his brother, Georg Ratzinger, with a concert in the Sistine Chapel.
The graceful voices of two sopranos and a tenor soared through the chapel where pontiffs are elected, and an orchestra and male choir from Regensburg, Germany, performed for Benedict and his brother on Saturday.
The two guests sat side by side listening to Mozart's C Minor Mass with Michelangelo's fresco "Last Judgment" looming on the wall behind the choir platform.
Georg Ratzinger is a former choirmaster who is now almost blind. The pope likes to play Mozart on the piano.
Benedict, 81, has said his brother helps him accept old age with courage.
Associated Press
Afterwards he received the 'Gran Croce' (Grand Cross) of the Italian Republic from Italian government undersecretary Gianni Letta.
at January 18, 2009

Afterwards, the Holy Father gave a free little speech in German, which was very moving, and he was indeed rather moved himself. That combined with the glorious Mass sung by the oldest continually existing Catholic choir in the world was really uplifting. May Almighty God bless the good Prelate Ratzinger.

Sincere Congratulations to the Monsignor - But what exactly is his connection with the State of Italy to have recieved the Gran Croce? Does he even speak Italian? I am glad we are not so liberal with our honours here in the UK.