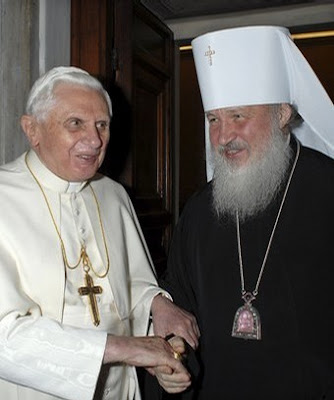 The Russian Orthodox Church chose an advocate of improved relations with the Vatican as its new spiritual leader last night, raising the prospect of a reconciliation between Rome and Moscow.

Metropolitan Kirill of Smolensk and Kaliningrad was elected Patriarch in the Church’s first leadership election since the collapse of the Soviet Union. Kirill, 62, had been the favourite to succeed the late Aleksiy II and was made acting head of the Church after the Patriarch’s death in December.

He defeated Metropolitan Kliment of Kaluga and Borovsk by 508 votes to 169 in a secret ballot of priests, monks and lay people at a Church council in Moscow. A third candidate, Metropolitan Filaret of Minsk and Slutsk, withdrew before the vote and urged his supporters to back Kirill.

Kirill becomes the 16th Patriarch and head of a Church that has enjoyed a remarkable renaissance in Russia since the Soviet collapse. Like his predecessor, however, he has been tainted by allegations that he was a KGB agent, codenamed Mikhailov, under the Communist regime.

He became known as the “Tobacco Metropolitan” in the mid1990s when he was embroiled in a scandal over the import and sale of billions of duty-free cigarettes to raise funds for humanitarian aid.

Kirill is a charismatic and popular figure in Russia, with a wide following as the presenter of a weekly television programme on religious affairs. He is regarded as a moderniser and the Church’s most able diplomat, having led its powerful department for external relations since 1989.
more
at January 28, 2009

“Tobacco Metropolitan” - echoes of our very own Fr Werenfreid the "Bacon Priest" who founded Aid to the Church in Need. Funnily enough much of the ACN's work was in the former Eastern Bloc where tens of thousands of people had not heard Mass or had the Sacraments administered for decades.

Tobacco and Bacon to 'feed the sheep of the Lord'! Wonderful.

The new Patriarch (Many Years!) strongly favours co-operation with Western churches to foster social and humanitarian advances in the face of secularism.

I believe it would be a fundamental mistake to suggest he has an essentially different theological position to his predecessor. After all as Metropolitan Kyrill and head of DECR he was the right-hand man of Patriarch Alexis II.

Well, this is an answer to prayer, Fr Blake. The Orthodox Churches are hardly ever mentioned when we speak about Ecumenism, or Christian unity. This is a resounding exhortation to include them.

My pupils have just begun researching the Eastern and Russian Orthodox Churches and asked to compare why they split away from the original Church and then to compare those reasons with the reasons why the Reformation rebellers broke away. We will be discussing it this week. The lessons won't be long enough.

We are living in exciting times, aren't we ?

Bernadette, actually the Eastern Orthodox Churches(Russian included)didn't split away from the original Church. The Schism of 1054 was a fight between the Romans and the Greeks and really never affected the rest of the East. Actually the Roman church broke away from Orthodoxy, if you study the history you will see this. There are five ancient Patriarchates of the Church in 1054, after the Schism four remain Orthodox and one, Rome, breaks away and becomes Roman Catholic of the Latin Rite. So who broke away from who? Read Timothy Ware's "The Orthodox Church" for more information!