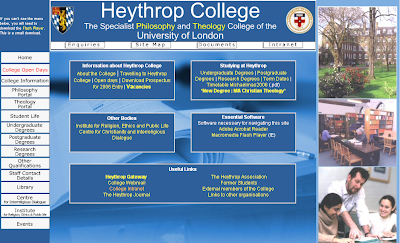 The Tablet runs a sad little piece by Isobel de Bertodano about the demise of Heythrop, which seems to have been weighed in the balance and found wanting. Catholic Action proposes some of the reasons why.
The reason I find this sad is that it demonstrates how the intellectual life of the Catholic Church in England and Wales has fallen into decay and been replaced by something barely Christian.
I would hope that the next Archbishop of Westminster can do something to revive our intellectual life. The bankruptcy of the liberal agenda that the London School of Heresy, as Heythrop was occasionally referred to, has been pushing for the last 40 years has done a huge disservice to the Catholic Church in the UK, and throughout the English speaking world. Former Catholic institutions are hardly going to attract young, bright, oprthodox catholic students or faculty.

TEN PER CENT of the theology, divinity and religious studies research being carried out at Heythrop College falls “below the standard of nationally recognised work”, according to an assessment conducted on behalf of bodies responsible for awarding funds for research. In the Research Assessment Exercise 2008, none of the
research at the college founded by the Jesuits is classed as world-leading
and, out of a possible four stars, 80 per cent of the research is awarded either one or two. The
RAE2008 was conducted jointly by the Higher Education Funding Council for England and similar bodies in Wales, Scotland and Northern Ireland. The information is used by funding bodies to determine their grants to the institutions from 2009-10. It is the first time the exercise has taken place since 2001.

Heythrop has been part of the University of London since 1970 and specialises in theology and philosophy. On its website it says that it includes "among its lecturers some of the leading thinkers in their fields". The college was established by the Jesuits in Belgium in 1614 and moved to Britain 200 years later. Its current principal is the Jesuit lecturer in systematic theology, Dr John McDade.
Nobody from the college was available for comment.

A national seminary should have been built in Oxford but Plater was sold off and I am not sure what happened to Greyfairs. The Dominican's studium could have been the academic driver for such a plan.

Failing that, I have no idea why the Beda in Rome has not been turned into an English language university. The Beda would have to be transformed radically of course. It could even have attracted secular undergraduates from the UK plus exchange students from around the world. We need some sort of centre of excellence offering STB/BDs.

The current seminary system is failing as many priests emerge poorly trained. Beda trained and Ushaw graduates strike me as the worst. The Beda was set up for well educated Anglicans not for 'mature' Catholics lacking, sometimes, even the basics - it's current role.

I was offered a place in 1981 to study Theology. Just as well I turned it down!

I second your hope that doing something about this situation will be seen as a priority by the new Archbishop of Westminster.

Sadie V.
Good to meet you outside Holy Smoke. Now why doesn't DT put this topic up for discussion?
(DNP)

Maryvale Institute in Birmingham is a far better place for degrees in orthodox (lower case 'o') Catholic Theology and Philosophy.

Maryvale and the education courses being developed by the diocese of Lancaster are an oasis in the academic wilderness found at present in the Catholic Church in this country.

Jane I'm sorry I don't know who you are but you have exposed me as a liar here! I am sure I commented once (when father was dissing HS) that I would never blog there again. I have not been true to my word! It is truly a crazy blog where people write long incomprehensible posts to one and other off topic.

A serious debate in respect of seminary formation would be useful. I know that father was taught canon law by one of those in the running for Westminster. Was he any good, Fr. B?

The Chaplain of Heythrop is a Baptist Minister, a surprising appointment by a "Catholic" college.
http://www.heythrop.ac.uk/index.php/content/view/120/151/

"I know that father was taught canon law by one of those in the running for Westminster. Was he any good, Fr. B?"

His star shone brightly, he was also Vice Rector, Mgr Budd was Rctor!

Maryvale stands out as a tiny oasis in a horribly dry desert.

I hope whoever gets Westminster will work with POD (for example) and scrap Catholic RE in this country and start again.

I'm so sorry. I didn't know about your promise, but trust Fr will absolve you! The trouble with HS is that one determines not to comment and just to read for any important news, and then somehow one is tempted....I totally agree with your assessment. which is more accurate now than it would have been 10 months ago. It's going through a particularly bad patch at the moment.

By the way I put DNP at the bottom of my last comment here, hoping you might recognise the effect/affect lady! (Dona nobis pacem). Most of the orthodox regsulars on HS know DNP and Jane are the same person. Obviously you kept your promise long enough not to realise this.

Maryvale is the best find of my life, after my wife found me of course.
Jim

ps Why is it not better supported and funded by the Church in England?
Westminster doesn't seem to like them one little bit

Nor can it be classed as truly Catholic, sadly... my faith in this academic institution was shaken when a leading member of the staff recommended Catholicism by Richard O'Brien as an excellent foundation text for the CCRS course... the book was proscribed by the US Bishops' Conference as being heretical...

The STB degree is taught in English at the Angelicum and fees are a fraction of what they cost in the UK. As a result of the Bologna Process their degrees have validity throughout Europe and also have canonical status for ecclesiastical offices. I don't understand why more lay students from the UK don't take advantage of the opportunity of studying in Rome.

Well, I did my MA at Heythrop and found the experience very rewarding. The library is unrivalled for liturgical material (outside of the BL of course).

My MA tutors were both interesting and stimulating and I thoroughly enjoyed the experience.

The only reason I won't do a Ph.D there is that the University of London wants £10k up-front and a minimum of six years before submission for p/t.

Ricardo good point. In this day an age people are more used to travel. At the risk of sounding mercenary, the Angelicum picks up big bucks from US universities from visiting students. Why don't we do something similar in Rome? We would have a much wider pool of talent to choose from in terms of teaching. 5 years at the Beda although it would needs pontifical status first (which it might already have anyway).

Jane ~ yes I remember you. I suggested that Radcliffe be the next Archbishop of Westminster and it elicited from you a questionnaire yet to be completed ...

I am reverting to Blake and Finnegan. Holy Smoke is already up and running again with insults flying on the back of Fr Blake's comments. B & F control the content and if you step out of line, you are corrected and your post removed. It's an approach that works for an old fashioned sinner like myself.

The worst thing, my dear Ladies and Gentlemen
(and Rev Fr), is that Heythrop College is training priests for the largest diocese in the UK: Westminster.

Contrary to the spirit if not the letter of canon law subjects such as Scripture, and Dogmatics are being taught by Anglican ministers and other non-Catholics.
So that the theology they come out with doesn't even have the semblance of Catholic theology.

A truly worrying state of affairs.

A highly misleading piece in the Tablet (what a surprise!) and the bandwagon jumpers climb on board. Where was Maryvale on the RAE list? nowhere, that's where.
Take a close look at the website. How many Catholics teach at Heythrop? 30. Who checks to make sure the BD/STB is done properly? Rome, that's who. How many world leading names at Maryvale? None. What about at Heythrop? Barnes? Kirwan? Hanvey? McDade?

gedsmk ~ you might be right about the report in The Tablet but what inspires at Maryvale is the profession of faith:- http://www.maryvale.ac.uk/index.php?id=143#

I can't find one on the Heythrop site although there are plenty of beards and M & S suits.

gedsmk,
Unlike Maryvale, Heythrop is actually a university college. The standard of research was being examined, therefore Maryvale would not have been included. Does Maryvale do a doctoral programme.

I had a look at the Maryvale site. well, yes it's true that the profession of faith is "stuck" there on the Monsignor's page, but without any context whatever.
And a quick scan of the courses makes me wonder whether there are any teachers there at all!

Today's Tablet has a letter from the Heythrop Principal setting the record straight. As we suspected, the original article was baloney.

Yes, indeed. A lot of people here too quick to jump to conclusions... see

Though, I agree that it terms of Catholic identity, Heythrop seems to no longer see that as a priority, which is a shame.

I myself was fortunate to have studied at Centre Sèvres for 4 years, the Jesuit faculty in Paris (and may be going back there for a sabbatical year next summer). I can certainly vouch for the very high standard of teaching there with many of the top French theologians and biblical scholars lecturing there. Yes, there were one or 2 "mavericks" amongst them (Paul Valadier, for example), but the vast majority I felt were soundly orthodox and in a couple of cases quite prominent in the French media as voices of Catholicism.

So, don't judge Heythrop too quickly. Yes, it has a different character to Maryvale... perhaps more questioning and intellectually challenging. But then (as have said Benedict + JPII - Fides et Ratio) the Catholic faith has nothing to fear from the application of reasoned argument and debate.

I would argue that each country needs its Maryvales and its Heythrops/Sèvres.