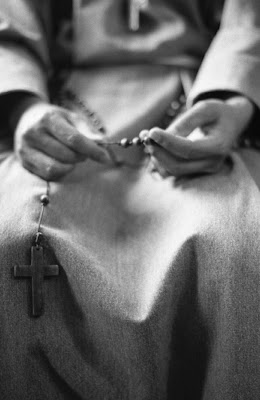 Christians tend to contribute more to society. I am unashameably triumphalistic about the contribution of Christians an in particular Catholics make to society, I preached about it on Christmas Day The underlying thought was that faith gives us a vision of what the world should be.
Matthew Paris, as an atheist, in a recent article on a visit to Africa noticed a deep difference between Christians and non-Christians.
Henry, who occassional comments on this blog sent me this link to a study by Miami University.

Religious rituals such as prayer and meditation affect the parts of the human brain that are most important for self-regulation and self-control;

When people view their goals as "sacred," they put more energy and effort into pursuing those goals, and therefore, are probably more effective at attaining them;

Religious lifestyles may contribute to self-control by providing people with clear standards for their behavior, by causing people to monitor their own behavior more closely, and by giving people the sense that God is watching their behavior;

The fact that religious people tend to be higher in self-control helps explain why religious people are less likely to misuse drugs and alcohol and experience problems with crime and delinquency.

Interestingly, this study deals with "the sacred" the fruit of prayer and reflection which on a human level is about bending the mind an heart to God, or "a spiritual end".
at January 13, 2009

I was talking to an Afghan man yesterday and he asked me about the Atheist nonsense on the sides of the London buses.We had to agree that without God there is no Law and without Law we are destroyed.

How can anybody enjoy life without respect for the Law.

Over the years Governments have made thousands of laws governing our every movement and always fear Gods Law.

People of all faiths normally get on with each other but there are always those who want to take away the Law of God and just look after themselves and care nothing for anybody else.Did any Atheist/Infidel do any good for for his fellow humans?

Interesting, Father. The article reminds me of Matthew Parris's assertion in the Times a few weeks back that Christianity makes a real difference in Africa, a difference that would not be there with purely secular aid.

Athanasius,
Thank you for reminding me of that, I have added a link.

Hmmmm.... Nickbris mentions an Afghan man in his comment and that got me thinking along slightly different lines. 'Religion brings self-control' - but has anyone told the muslims, as it would appear that they are missing something????? Of course in their defence they would say that they view their goals as "sacred," and therefore they put more energy and effort into pursuing those goals - ie subjugation of the world to allah, by force. Christians all over the world are being persecuted and murdered wholesale on account of this. Sad but true.

It would seem to me that some religions bring self control while others clearly do not!

Being Anti Islamic just for the sake of it only perpetuates the problem.The taking of life is forbidden in the Koran and the majority of Moslems abide by that rule.

It is also forbidden in Christian teaching.We murder 2 Million unborn babies in a decade in this country alone and this is a Christian country.

Maybe the Church should run an ad campaign on the London buses with the simple slogan "Wisdom 13:1".

Then people would have to consult a Bible to decypher the message:

"All men who were ignorant of God were foolish by nature; and they were unable from the good things that are seen to know him who exists, nor did they recognize the craftsman while paying heed to his works..."

Francis that's a great idea! I might suggest references to one or two verses from St Paul's letters also....

Eccleston Square would have to run the campaign, so that rules out Catholic backing! How about some of our Evangelical brothers and sisters out there??

Then there is the issue of getting the adverts past London Transport 'peaked hats' and 'jobs worths' and finally the Advertising Standards Authority.

Well you never know.... if the secularists and aetheists can do it?