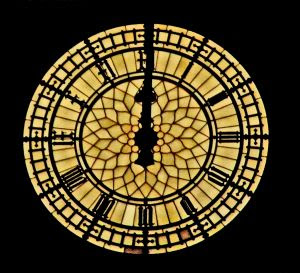 Of course we Christians began New Year back at the beginning of Advent. Protestant hatred of the Blessed Virgin ended the start of traditional English New Year on Lady Day, the Feast of the Annunciation, 25th March, the hangover from that was the start of the Tax Year, a few days later, from 1st April.

I was a little surprised yesterday by the number of people, practically all with Indian accents, who rang up looking for a midnight Mass. I know some people do it but it really is quite unliturgical. I think it overshadows Christmas Midnight Mass. After this years Midnight I am going off the idea altogether, this year we had a poor chap who was invited to Mass by someone who abandoned him at the Church door, he had never been to Mass before, he caused a bit of trouble with those around him and was made to leave. Then there was a girl who was sobbing all the way through, oh yes, then there was a man who exposed himself at the Church door to a woman. Well it is Brighton, isn't it?
I must say the murder that took place a hundred yards away make me wonder how safe it is to have people out late at night in Brighton. The road is still cordoned off, guarded by police. We will pray for the poor man's soul at Mass.
I think this year I am going to declare war on the three ancient great sins:

All of these are about rupture within humanity. within the family, within the Church, the very opposite of what Christ came to do.
at January 01, 2009

A Happy Secular New Year to you to Fr. Ray.

Wouldn't it be wonderful to start a campaign for the restoration of Old New Year's Day on March 25th.

I think 25th March is also the Persian New Year,is there any connection?.

You are right about the Midnight Mass,I gave it up some time ago,the church seems to be full of people who haven't met for a year and the hubbub is enough to make one want to scream.

The streets are only protected by CCCTV as the Police are too busy dealing with drunken yahoos in the town centre,if you did have to dial 999 the voice you get will only say "we are very busy" or some other nonsense.

Father, I am sorry to be a pedant but the tax year starts on 6th April. This came about when Britain adopted the Gregorian Calendar in September 1752. Because of the differences between the Julian and Gregorian calendars and the delay in Britain adopting the new calendar, this required a correction of 11 days, 2nd September 1752 being followed not by 3rd September but by 14th.

After 1753, the British tax year in Britain continued to operate on the Julian calendar and began on 5 April, which was the "Old Style" new year's day of 25 March. A 12th skipped Julian leap day in 1800 changed its start to 6 April. It was not changed when a 13th Julian leap day was skipped in 1900, so the tax year in the United Kingdom still begins on 6 April.

I also had a few calls from people with Asian-sounding accents asking about midnight Mass for the New Year - a new phenomenon in these parts. A good number came to Mass this morning.

Sadly, our Christmas Midnight Mass has been eclipsed by (much) earlier 'vigil' Masses that cater for children, the hardy annuals and and many who seem to want to get the obligation over and done with. I suppose we should rejoice that they have actually been to Mass at some point....

Happy New Year to you Fr Ray and to all readers, whenever your particular 'new year' happens to start!
We will keep the distressed souls you mention in your post in our prayers and trust that Our Blessed Lord will give them comfort.
Yes, Brighton is indeed an interesting mix. My eldest daughter studied for a teaching degree there for four years, and my youngest son is currently in his second year studying for his degree. We dropped him off to his digs on Tuesday and noticed the high police profile. Only found out through your blog about the terrible and so senseless a killing of the poor man in the streets. 'Eternal rest grant unto him o Lord........'

It was a bitterly cold late afternoon and getting dark already, but that did not put us off going for a walk along the pier as my younger girls are great candyfloss fans - yuk! The sea was so calm and there was an absolutely gorgeous crescent moon with its closest star shining brightly against a clear dark blue sky. Would have made a classic photo except for one thing - I did not have a camera to hand.

By the time we got to a restaurant for some food we were all frozen. Have to say that my choice of minestrone soup for a starter went down a treat.

Murder, Adultery, Apostasy. In Islam, the penalty for the last two is the first.

I'll join you in prayer to their end.

Fr, I think a midnight mass for Mary, Mother of God can be done well. I went to one last night at a parish in Denver, CO, US, which is done nicely. It's a rather small crowd that shows up. It is prefaced by a couple hours of adoration, the priest suggests that we spend it in thanksgiving for the year and praying blessings in the new. We then have a short Benediction, a little more silent time for prayer, and then the Mass. I go to the Christmas Midnight Mass at our Cathedral, as many parishes here do them at 10pm or so, so for me the Christmas Midnight Mass isn't overshadowed. Anyway, this mass I think provides a good alternative to the typical New Year's revelry for those disinclined to it. So though the situation in Brighton may make it unworkable, I don't think the idea in and of itself is bad. Thank you for the blog, Father, I enjoy reading it.

I have never heard of a midnight Mass for this particular feast day before but do remember attending an Easter midnight Mass here in Brighton. Those were the days when all the Catholic churches here were open all day and seemingly life was less violent than it is today.

Regarding the safety of your parishioners it is entirely your decision Father Ray whether to continue with the Christmas midnight Mass in the future. I understand that some churches do have it earlier and I don't think moving it can be equated with moving a feast day which has brought much criticism.

I was lucky this year to be offered a lift to Midnight Mass by a good friend there and back. I had been quite prepared to walk it - as I used to from my own parish returning in quiet contemplation - but walking through central Brighton at night is a different matter. However if I had had dependants I would not have considered walking at that hour.

I live in a very respectable area of a very respectable town, with a much more staid reputation than Brighton, yet the very secular New Year began with dramatic events. Last night at 1130 a dozen police, complete with "hoolie van", two police cars, and one police dog made a raid on the big house opposite mine. It lasted until after midnight.

This morning on the way to collect my newspaper on the same road I encountered two fire engines, two police cars, and numerous policemen trying to get a man down from quite a high roof on which he was sitting. It took time, effort and manpower.

A few months ago a poor women only a few houses away was so unhappy that she hanged herself from a tree in her garden.
Nothing like this has happened before here and seems to me to portend the further breakdown of society.

We do not need a happy "secular" New Year, we need a religious one. Secularism is a failing creed that cannot even induce civic decency and order.

Our Christmas "midnight Mass", which is really the vigil Mass, is at 9pm. In all honesty, at my age the midnight Mass is more than I can handle.

Funny, I remember being a little sprout and so anxious to be old enough to attend the midnight Mass. Sigh!

Happy New Year, Father. Thanks for the great blog and thanks for being a priest.

Happy 2009 to you Father, May God Bless and keep you and continue the great work at this blog.

In my last parish, we had Mass at Midnight to see in the New Year (with an hour's Adoration beforehand, to see out the old year!)

I rather miss the opportunity to start the New Year that way, though I'm happy that, at my current parish, I can still see out the old year with Adoration and Benediction.

On New Year's Eve my parish celebrated the EF of Mass at 18:00, followed by Solemn Vespers for the Octave Day of the Nativity then Benediction, which concluded with the magnificent 'Christus Vincit'. A very good way to end the old year and greet the new one.

"We do not need a happy "secular" New Year, we need a religious one. Secularism is a failing creed that cannot even induce civic decency and order."

Which is why I believe a return to the Christian practice of the New Year beginning with the Annunciation is a good idea. It would help Christians step away from the secular culture.

Happy New Year, Father - wishing you and this blog all the very best for 2009.