Priests should encourage recovery of Sacrament of Reconciliation 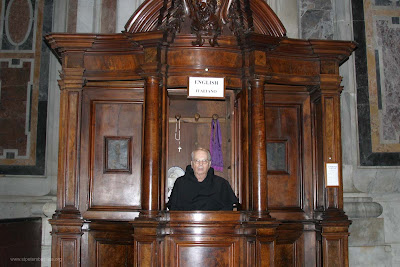 I firmly believe anyone who wants to take the spiritual life seriously must take the Sacrament of Reconcilliation seriously. The Apostolic Visitation of the US Seminaries condemned monthly Confession for seminarians as being rather lax, in favour of fortnightly Confession, though Pope John Paul II, encouraged young lay-people to go monthly.
Healthy, thriving Religious Communities I know encourage weekly confession, daily use of the sacrament as practiced by Pius XII, and I think John XXIII and John Paul II, for many people seems to cause a degree of neurosis, for most people I tend not to encourage it, except on retreat, or in exceptional circumstances, or of course in the case of daily serious sin.
The problem is if regular and frequent Confession is discouraged then people tend to remain away from the sacrament even in the case of serious sin, and then tends to lead to the destruction of true spirituality.

(CNA).- The Vatican congregation in charge of overseeing the Sacrament of Reconciliation as well as the granting of indulgences has just finished a conference in Rome. The aim of the meeting was help people recover “the joy of the personal experience of the mercy of God” and to encourage priests to make this a priority.
According to the L’Osservatore Romano, the event which took place January 13 and 14 was, in the words of the head of the Apostolic Penitentary, Cardinal Francis Stafford, an occasion “to offer to the men and women of today, immersed in a post-modern culture, the opportunity to reflect profoundly on their interior life and ask God for forgiveness for the ‘abuse of power’ that is in their hands.”
“Our objective,” he said, “is to reflect deeply on the pastoral meaning of our Tribunal and why the Church, in her wisdom, created this tribunal of mercy. My hope is that the answer has been clear in these two days of meeting and conversation.”
The Vatican newspaper also quoted Manlio Sodi of the Salesian Pontifical University, who led a round-table discussing during the Symposium and said the issue of penitential services and general confessions, which are more common in North America, are “rites that fundamentally alter the very foundations of the personal act of Confession.”
“It is a practice that poses enormous problems. If the rite of Penance were observed and taught instead, the faithful would not be misguided,” Sodi explained.
L’Osservatore Romano also pointed out that the “traditional rite of Confession underscores the aspect of liberation which divine mercy freely offers to the penitent who wishes to be reconciled with God.”
at January 19, 2009

Count me out as a "fan" of penitential rite services. My own feeling is that psychologically, one is less likely to confess more frequently if in the back of one's mind a "Group" is percieved as needed, or perhaps a "share the wealth of sin, and this way my confession won't be so outstanding and the priest can't call me to task as much." [A wrong notion to be sure, but I think sometimes people might think this.]

I'm not saying ban them, but if they are to be kept surely more than twice a year penance services should be held? Most churches do them Easter and Christmas...which leaves the other 10 months the year. And if you only go twice a year, then you tend to generalise sins rather than be more specific, and I think it helps the priest guide one more if one is more self aware of specific sins and calls oneself on them. It's like a lot of little bills adding up to one much larger than the preson realizes is outstanding! I'd be curious to know what you think of penance services.


Years ago even well into the 70s it was fairly frequently that during Sunday Masses there would even be a priest sitting in the confession box up until the offertory. This is far from ideal, but I can well remember quite a few taking advantage of that (myself included!) Now one makes a special trip, normally on a Saturdayl One church I know (with a good confessor for a pastor) has Penance for a good hour before Mass, and from the start the priest is "busy-busy" hearing them back-to-back. Right up until Mass time.

I stay aay from penance services now, and tend to find they don't work for me. I simply don't like them. My thought is "I committed these sins by myself, I don't need the group right now to come confess." I wouldn't rule them out entirely, perhaps some people really do find them more comforting and easier to go to than a more traditional way.

I'd be curious to know your own feeling about penance services.

There's a young man who goes for confession almost twice a week. His confessions are almost repetition and sometimes it's annoying to listen. I noticed that he is struggling with habitual sins and I give him spiritual advice. I told him not to be discourage and have faith in God to heal him. I also assure him that I am always willing to hear his confession.

If we take the Sacrament of Reconciliation seriously then we meet the Priest in the confessional on a one to one basis. There is no other way. If you are truely penitent then you must also be humble before the Lord. Humility is definitely not a popular word these days, but nevertheless is an essential quality for Spiritual Formation - just ask any Saint!

The Graces that are there waiting to be obtained from this Sacrament can transform lives so completely as to be nothing short of miraculous. Jesus waits for each of us to visit Him and be truely sorry for our sins and make reparation. Monthly, weekly or even twice weekly, as Fr Gary V says ' I am always willing to hear his confession'. Fr Gary V and all our Wise and Holy Priests understand fully that they represent Our Blessed Lord Himself in the confessional, who will never tire of our visiting Him regularly and being sorry for having offended Him.

I go about once a month. The grace I receive is tremendous. I always know when it's time to go as I start to sin more!

How can we thank God enough for the priests who are eager to hear confessions, who share Christ's longing to forgive and strengthen, day after day, before Mass, during Mass, in the presbytery, in the street, whenever.. perhaps listening to the Lord who told St Teresa of Jesús to offer her Mass in thanksgiving. What graces are received, what purification of soul to love Jesus more, to offer oneself, to bear witness with all that implies! How blind is a local Church when priests, bishops even, do not encourage frequent confession! What strength, fervour and light when the sacrament is loved. What a victory for the devil when it is not! During the Solidarity strikes in Poland in the 1980's there were queues of factory workers waiting to confess in the streets, whilst priests, humbly sitting on factory crates , other Christ's, washed and prepared the people for the struggle ahead.. Of course venial sin can be forgiven in the Mass, but the sacrament of forgiveness cuts through the dross and unites with the Crucified One as nothing else. And what better preparation for receiving the Eucharist? Praise God for the sacrament of mercy and only gratitude and more gratitude for the priests who patiently await sinners in the confessional!

I went to confession last Saturday, I was the only one doing it and the priest wasn't even in the confessional (the "reconcilliation room"), I had to ask him to go in so I could make my confession. I think I may have found the problem! (At least in one parish) He also didn't let me say "bless me father..." but talked for a while on "Prayer for peace day" or something, he didn't give me a penance and didn't make me say the Act of Contrition, it was weird.

I also went to a christiams confession service at another church last month, there were three of us there.

Alan, I might respectfully suggest that you seek out a wise and Holy Priest in your area. Perhaps if you email Fr Ray he may be able to assist through trusted contacts.

It's tragic to hear that Catholics with a genuine desire for this wonderful Sacrament and confess their sins are met with such an extraordinary set of circumstances.

You can have Our Lord in one confessional, and any priest you like in the next one, even one leading a bad life or who's even lost the faith. The advice may be different so we must look beyond the priest and look to Christ. Whoever the priest may be, when we hear those comforting words, 'I absolve you', it is Jesus who has touched our souls and forgiven our sins. If the efficacy of the sacrament depended on the holiness of the priest, we could be caught up in a turmoil of anxiety and rash judging. If you go to a priest who gives you the impression that you are wasting his time go elsewhere. Fr Thwaite said that as a priest 'Although offering the Holy Sacrifice of the Mass is the greatest thing we (priests) can do, nevertheless, if I seek to console the Sacred Heart of Our Lord, I'd rather be hearing confessions. It's when a priest is hearing confessions, bringing peace and heavenly consolation to so many people, that he's happiest in his priestly vocation. That is when he is most aware that Christ is working through him for the salvation of souls'

God Bless our Priests and we must remember to pray for them.

Clear and user-friendly presentation of much content - the nature of sin, grace, contrition, the sacrament etc on the one hand, and on the other chapters of a more practical bent. It's in my Top Ten Useful Pious Books.