L'Osservatore on Lifting the Excommunications 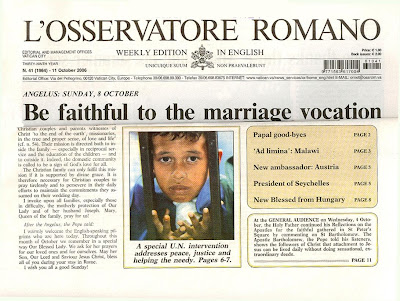 Carlo Di Cicco, author of the article and subdirector of L'Osservatore Romano, affirmed: "The reform of the council has not been totally applied, but it is already so consolidated in the Catholic Church that it cannot go into crisis with a magnanimous gesture of mercy -- inspired, moreover, in the new style of Church promoted by the council that prefers the medicine of mercy to that of condemnation.

"The revocation that has provoked so much alarm does not conclude a sorrowful situation like that of the Lefebvrist schism.

"With it, the Pope removes pretexts for infinite polemics, directly confronting the authentic problem: the full acceptance of the magisterium, obviously including Vatican II."

The author went on to affirm that the Church "renewed by the council is not a different Church, but the same Church of Christ, founded on the apostles, guaranteed by the successor of Peter and therefore, living part of tradition."

L'Osservatore Romano further denounced any accusations that the Pope "is not convinced of the path of ecumenism and dialogue with the Jews." It recalled that the Church's most authoritative document on this dialogue, "Nostra Aetate," deplores any type of anti-Semitism.

And, Di Cicco observed, "The revocation of the excommunication does not yet mean full communion. The path of reconciliation with the traditionalists is a collegial option already known by the Church of Rome and not a sudden, improvised gesture from Benedict XVI.

It's quite obvious from Mr. Di Cicco's letter that he regrets the lifting of the excommunications, as he continues to use the derogatory words of "Lefebvrist" (a word that does not exist in the English langauge) and still imply they are in schism.

In an earlier posting, some commentators said that the current Pope admitted errors pertaining to Vatican II documents. This is not true, Pope Benedict XVI said there were errors in applying Vatican II directives, that's why the Church has mini-schisms, "Lefebvrists" and other problems spanning the last 45 years, since the end of the infallible Council.

In regards to the lifting of the excommunications of the traditionalists, the Pope did what protestants refer to as "WWJD" - 'What would Jesus do?'. He is implementing the love of Mother Church that the great Council reaffirmed through the guidance of the Holy Spirit!

The "good fruits" of the Council shall be applied till the end of time! They are a reaffirmation of Christ's Church and His directives for Her(Matthew 16:18-19)!!

Infinite number of years on...

It will certainly be interesting to see what happens but if the latest publication of the cult (http://www.sspx.org/sspx_media_brochure.pdf) is anything to go by, still claiming that the excommunications were "null and void", whilst paradoxically thanking the pope for remitting them, then it is probably safe to predict they will soon throw up yet more reasons why they cannot return to "modernist" Rome.