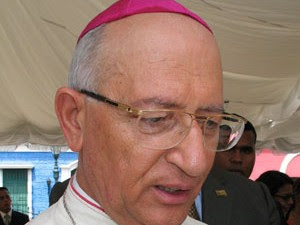 (AP) — Unidentified attackers hurled tear gas canisters at the Vatican's diplomatic mission in Venezuela, at university students and at the home of a media executive on Monday, the latest in a series of attacks against critics of President Hugo Chavez.
Monsignor Roberto Luckert, vice president of the Venezuelan Episcopal Conference, told Caracas-based Union Radio that at least five tear gas canisters were thrown at the Vatican's mission in Caracas around dawn on Monday.
Separate attacks also targeted a gathering of students at the Central University of Venezuela and the home of Marcel Granier, director of a television channel noted for its criticism of Chavez.
Luckert said nobody was hurt in the attack on the mission, which he blamed on a pro-Chavez group calling itself "La Piedrita," which has claimed responsibility for past tear gas attacks against Chavez foes.
"They are trying to scare anyone who dissents," he said.
Chavez has sharply criticized representatives of Venezuela's Catholic Church for opposing proposed constitutional changes that would lift term limits for all elected officials, including Chavez.
Nobody was hurt in the attack at the university, but the gas scattered the students.
Students later gathered outside the Attorney General's Office, where they condemned the attack and urged authorities to investigate the attack and guarantee their safety during upcoming protests against the proposal to lift term limits.
"These are the things that cannot continue occurring in Venezuela," said student leader Ricardo Sanchez. "The student movement cannot fall into the game of violence."
Police could not be immediately reached for comment.
Chavez, who was first elected in 1998, is currently barred under the constitution from seeking re-election in 2012. A referendum on lifting that limit goes to voters on Feb. 15.
Marcel Granier, director of privately owned Radio Caracas Television, said unidentified assailants tossed tear gas at him home in eastern Caracas early Monday.
Chavez decided in 2007 not to renew RCTV's broadcast license and replaced it with a state-run channel. RCTV now airs only on cable.
at January 21, 2009