The Catholic Herald is the first newspaper to mention Fr Edmund Power, the Abbot of St Paul Outide the Walls as the successor to the Archbishop of Westminster, see here.

I know very little about him, except that he is well respected in Rome. St Paul's is one of the Major Basilicas in Rome, and is the base for much of the Holy See's ecumenical work. I 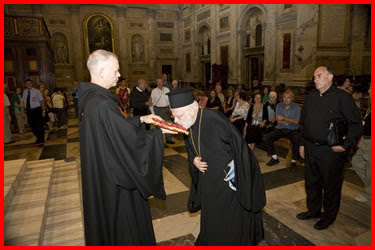 must say I would be willing to put my money on him, he is bright, learned and not from the magic circle and a real Benedictine in both senses.
He might well be seen as a good choice for many reasons, one is that Rome seems to see England and Wales needs a learned and effective leader.

The influence of The Tablet and Tabletistas is seen as being significant and influential in the English speaking world by many in Rome and yet most of the letters that are received from England and Wales, what is read on the blogs - they are read in Rome; what is heard from younger clergy makes it appear that there is a gulf which the Bishops do seem able to bridge, which tends to lead to a dissipation of the Church's strength and confusion about its identity and mission.
The Herald did suggest that Cardinal Pell might be transferred to England, which was just plain silly; but Pell is taken seriously in his critiscism of the Church of England and Wales and the effect it has on the English speaking world, his views are well known. It might be quite ironic if the The Tablet, or rather reaction to it, actually frames the choice of the next Archbishop of Westminster. Cardinal Murphy O'Connor, on various occassions has said many in the Curia can't understand why the bishops can't rein it in, "They don't understand it is independant of the heirarchy", he says, what he doesn't say, is they do not understand why no English/Welsh bishop argues articulately against it and seeks to defend the Church, either in pastoral letters or print. There are real questions about the intellectual input of the Church in England and Wales, both in the public forum and in the debates amongst the heirarchy.

However at the bookies...
Archbishop Vincent Nichols of Birmingham remains 2-1 favourite with Irish bookmakers Paddy Power.

The second favourite is Archbishop Kevin McDonald of Southwark at 5-1, with Fr Timothy Radcliffe, former head of the Dominican order, at 6-1.

Bishop Malcolm McMahon of Nottingham is also thought to be a contender. 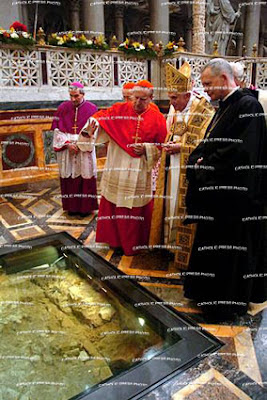 The picture shows the Holy Father and the Abbot looking at the excavated tomb of St Paul.
at December 07, 2007

Is it fair to continually speculate on Cardinal Murphy-O'Connor's successor to the point of naming possible candidates? The Pell candicacy was patently absurd and should not have been published in a responsible Catholic newspaper. And now poor Abbot Power. The reality is that nobody knows who the next archbishop will be. Archbishop Nichols would be bland but would toe the centralist line. Archbishop MacDonald could not be more colourless and would do little to raise the profile of the Church in the National consciousness. If an appointment from England and Wales is to be made the Archbishop of Cardiff would be one of the best options. He has a good public manner, intelligence and is not afraid to promote fundamental Catholic values. But whether he would encourage Folies Bergere liturgy is uncertain.

Can't we have the Bishop of Lancaster please? & one or two of those suggestions fill me with horror!

Anonymous, I think you answer your own question by your own speculations.

It is of public interest to speculate on HE's successor. I can see no problem with the discussion, or with priests like me or the man or woman in the pew showing some interest. I would be very worried if the matter was met with silence.

I think Abbot Power could just be an inspired choice. Impeccable ecumenical and European credentials, clearly a man of prayer and learning (which is what the BCEW needs more than anything), clearly an experienced leader and administrator at ease with a high profile role and a monk, which would fit with B16's "Benedictine revolution" and the recent appointments in Germany. On the negative side the British Media would not take long to focus on Douai Abbey and the closure of the school, the disaffection of many of its former pupils and no doubt dig up as much dirt as they could about it but this would probably die down relatively soon. The BCEW would also resist this very strongly. I seem to remember a comment about "never a monk again!" circulating after Cardinal Hume died.

The major advantage is someone close to the centre and to Rome, someone who, regardless of his own personal views, would I am sure see it as his task to steer the Church in this country in a spirit of obedience to the Pope and who would insist on viewing the Church in continuity with its tradition and not in the context of the sort of "Cultural Revolution" "Year 001" mentality shared by several of the current bishops.

Look what happened when a good, well-educated, orthodox bishop was appointed to Birmingham some years ago. I mean Archbishop Couve de Murville. He had excellent credentials and had proved himself pastorally as a brilliant university chaplain at Sussex and Cambridge. He took Catholic education seriously and made it a priority. He had the common touch on pastoral visits to parishes and entertained his clergy with grace, generosity, welcome and style. As so few knew how to hold a knife and fork this rebounded.

Yet, because he came from a French aristocratic background, had been educated at Downside and Cambridge, and understood Europe through and through he was seen as a social threat by most of his fellow bishops and diocesan clergy and was cold-shouldered because they were afraid of him. This soon turned to mockery (the offensive of the mediocre) and the bishop's marginalized him.

Any bishop appointed to England and Wales with a similar hand of cards, whether Archbishop of Westminster or not, is likely to face the same Siberian response. Cardinal Hume was saved by his holiness and popularity among the English people. But he was not liked by his colleagues. Archbishop Couve de Murville was one of the most interesting episcopal appointments of recent years and did good work but Rome will not have failed to notice the way he was treated.

Whether they will play safe or make an equally bold appointment to Westminster remains to be seen. Whoever goes there will be given a poisoned chalice. We must, I fear, expect a mediocrity who is bland at best. The tote's favourite fits the bill to perfection.

A propos of the suggestion by "Anonymous" that the Archbishop of Cardiff would be a good candidate for Westminster, isn't there supposed to have been a bust-up between Cardinal Ratzinger and Peter Smith over a dodgy RE textbook to which Smith had given his imprimatur?

The story that has passed into legend is that the two of them had a "full and frank exchange of views" during an ad limina visit - perhaps the classic case of an English magic circle member casting Joseph Ratzinger in the role of the German U-boat captain and trying to play Captain Mainwaring. Or, should I say, the classic case of an English bishop playing Basil Fawlty to Ratzinger's German hotel guest?

If this is true, I don't understand why the bookies and other interested parties rate Archbishop Smith's chances as highly as they do.

So the Cardinal tries to explain in Rome that the Tablet is 'independent of the hierarchy'? Funny how that only applies to criticisms from the liberal wing of the Church. If the Catholic Herald got too uppity the bishops would soon find a solution: ban it from sale at the back of churches. Not quite as effective against the Tablet, because of its subscriber base, but a serious threat along those lines would certainly make them think twice.

Peter Smith has quite longs odds.

Anthony Howard has called him a good media performer and Dr. Oddie has described him as "polite".

The alleged dispute with Ratzinger did not stop Smith gaining Cardiff.

I wish you lot would get real. The field is so low grade that there are hardly any good candidates to choose from. They reflect the declining standards of the last forty years and all we shall get is more of the same. Mediocrity is the best policy because there is no alternative.

Sadie mentions the transfer of Peter Smith from East Anglia to Cardiff even after the spat with the Prefect of the CDF. But surely this move was "Ratzinger's revenge" rather than being a promotion?

1. Peter Smith's translation to Cardiff was a hospital pass, a thankless pick-up-the-pieces exercise after the scandals which forced the resignation of Archbishop John Ward;

2. Peter Smith was parachuted into Wales as a complete outsider - he couldn't even say "Good morning" in Welsh and this must have caused him considerable acceptance difficulties in Wales;

3. Although, officially, Cardiff is an archdiocese and East Anglia isn't, I find it hard to believe that the latter - which contains Cambridge University and England's major Marian shrine - is really any less important ecclesiastically.

4. About the only consolation was getting the title of archbishop.

To me, it looked like a giant sideways move.

Intellectuals? What about Mgr Buce Harbert, no lightweight there.

Archbishop Smith for Westminster? No, no, no - not after the truly dreadful "Catholic Christianity" matter!!

I know nothing about one of the two Benedictines who have been mentioned (Abbot Power). But Abbot Gilbert, of Pluscarden, would be excellent. He is orthodox, incisive and holy (and a linguist too, incidentally).

Msgr Bruce Harbert is an interesting recommendation. No media experience though. Is this important? Has been out of England for a long time, but his work as secretary of ICEL has given him a working knowledge of the episcopacies of the English speaking world. He says both forms of the Roman rite.

I would like to see Fr Patrick Burke of the CDF, but he's probably far too young.

Why don't we get Cardinal Ruini as a stop-gap?!

Hugh Gilbert a linguist? Interested to know which languages although I imagine his Latin is pretty good!

My understanding is that he had a very limited theological formation at the now closed Fort Augustus.

Pluscarden is notoriously anti-intellectual and not like the EBC at all, it being part of the Subiaco congregation.

Perhaps the Church could acknowledge reality and the future and appoint a Polish bishop, rather than another 'nuanced' dilettante.

I have been lucky enough to dine with Father Edmund in Rome a few times and had a blessing from him during my last visit to St Paul's. He is a great theological interlect and a pious man. I made a joke last time we met that I'd see him in red and he laughed it off. We need a strong, media savvy politician to fight off the constant secular attacks on our faith and I don't really see Father Edmund in that role.