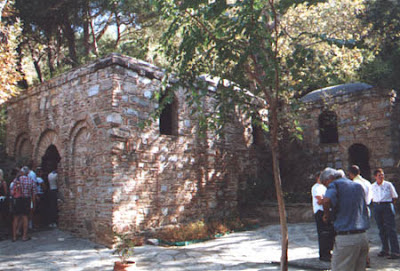 Holy House of the Blessed Virgin Izmir
A Catholic priest was hospitalized Sunday after being stabbed, the Italian Embassy in Ankara said, in the latest in a string of attacks on Christians in Turkey. Police said they had detained the suspected attacker.
The assault on Italian Franciscan Adriano Franchini was likely to add to concerns about whether the predominantly Muslim country — which is bidding for European Union membership — can protect its Christian community.
Franchini was stabbed after Sunday Mass at St. Anthony's church in the port city of Izmir, said Simon Carta, the Italian consul there.
The priest is responsible for the Capucin order in Turkey and heads the Church of the Virgin Mary in Ephesus, Carta said. He said the priest was conscious when he was taken to a hospital. his injuries inflicted by a sixteen year old boy are not life threatening.

I have had a short correpondence recently with a couple of members of a parish run by another religious order in Turkey, who seem to do everything they can to thwart any possible attempt to evangelise, not it appears, for fear of attack but rather because of their committment to "dialogue" with Islam.
Sandro Magister has another insightful article, this time on the recent "Note on Evangelisation" by the Congregation for the Doctrine of the Faith, which is supposed to clear up the confusion between dialogue and evangelisation.
at December 18, 2007

Dialogue with Islam is impossible as there is an irreconcilable gulf between the Christian and Islamic understanding of God. They are monotheists and cannot understand the Trinity, philosophically or theologically. They think we worship three Gods, not one. There is nothing that can break this barrier.

Following a series of Tv films introducing some young people to Islam in Britain, I have been surprised how much we do have in common.

Regular prayer; charity giving; fasting; modesty in dress; self discipline etc. all are common - or should be -in both faiths.

We are all God's children searching for the way which seems right for us to do God's will. As a Roman Catholic I have never doubted the choice I made over forty years ago. However I respect the beliefs of others and like to believe that there are many paths to Heaven. Surely the most important thing is to follow the path which you believe is the 'right' one - in our case that of the Roman Catholic church - but others may not agree with this.

Islam can be regarded as a compilation of selected Orthodox Christian and Jewish beliefs and practices.

Thus it is inevitable that there will be some that are common to one or other of the older religions.

But the selection also involves rejection of other beliefs, and to that extent Islam defines itself as being expressly against Judaism and Christianity, as is evident from a reading of the Koran. This leaves no room for genuine dialogue. But because Islam is also, of its nature, aggressively militant and missionary, the notion of live-and-let-live does not apply, any more than it does if one is sitting on top of a volcano. Sooner or later it will erupt.

This has a bearing on the so-called "war on terror". In reality it is a war on the militant end of Islam, which, according to an interview with the Chief of the Metropolitan Police, amounts to around 2000 people in the UK alone. Whilst the police and forces have to do their job as best they can, the war is really one of spiritual forces and we should be praying for their conversion.

Pelerin - the belief that 'there are many paths to Heaven' is erroneous. As a Catholic this is a ridiculous view to hold and is one that seriously waters down your own convictions on the Truth.

'I am the Way, the Truth, and the Life' said Jesus, and the ONLY way to heaven and to the Father is through Jesus Christ and the Church He instigated through Peter.

Anything less than this is NOT Catholic and will ultimately lead to confusion, dissent, heresy and death of the soul. There is only one path to Heaven, and it is clearly marked and not at all that difficult to follow, don't go down the blind alleys and garden paths however 'sweetly' the enemy calls.