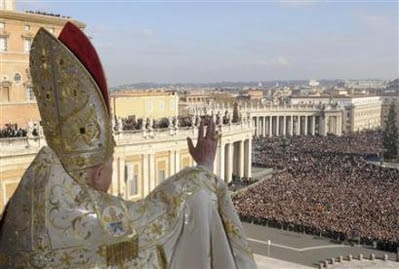 Apparently RAI, the Italian television station have been fascinated by the Papal wardrobe, the significance of the 7th candle, the use of the portable throne - minus carrying poles. On the blogosphere people have been delighting in the return of things not seen since the beginning of the reign of John Paul II, or whoever. Other people have suggested this is all a little vulgar, and rightly have asked what has this got to do with the Gospel.

I suspect those who ask this question are unfamiliar with the Holy Fathers writings or speeches. From the very beginning of his papacy he has stressed "continuity". When taking possession of the Lateran he said that the role of the Pope was to present nothing of his own, but to be like the wise scribe, "who brings out from his store room things both old and new".

I have always considered "Dominus Jesus", written whilst the pope was still head of the Congregation for the Doctrine of the Faith, in 2000 as being the blueprint for this papacy. There he stresses the continuity of the Church from Christ to the present day. 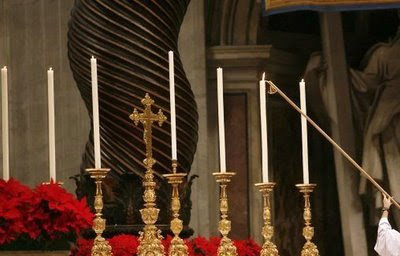 The vestments and the furniture stress the continuity of recent history, the use of the Pope Leo XIII's throne, which was used by the Blessed John XXIII and Paul VI whilst presiding over the Second Vatican Council, is the most obvious example. His Wednesday catechises have stressed the continuity of the Church with Jesus, he began with the Apostles, continued with the first Fathers of the Church who knew the Apostles and now we are up to the Fathers of the sixth century.

As far as the liturgy is concerned, his concern is that Ordinary Form of Mass was, in his words, "created by a commission ex nihil". He wants to give the liturgy "roots", the easy short term way is to use the ornaments of the past. Long term of course he expects the Extraordinary Form to have an effect. For him disaster would be that every fifty years we decide to re-invent the liturgy and the Church too. As one liberal English bishop said to me four or five years ago, "We have moved beyond the Council -Vat II- we have to find the new Church", the exact opposite of all Pope Benedict stands for. 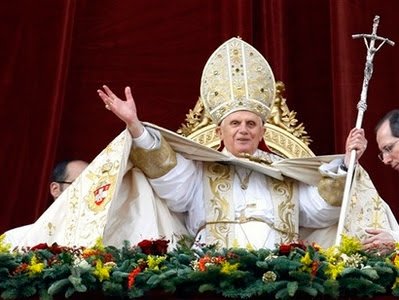 CNS -- The Vatican's Christmas liturgies and rituals include a mix of old and new to demonstrate continuity with the past, said the master of papal liturgical ceremonies.

"The vestments used, like some of the details of the rite, aim to underline the continuity of today's liturgical celebration with that which characterized the life of the church in the past," said Msgr. Guido Marini.

In an interview published in the Dec. 24-25 edition of the Vatican newspaper, the master of ceremonies spoke about Pope Benedict XVI's decision to use older miters and vestments at his Christmas events and the decision to place a crucifix on the altar in St. Peter's Basilica.

Under Msgr. Marini's predecessor, a crucifix was carried into the basilica during the entrance procession and placed alongside the altar.

The newspaper, L'Osservatore Romano, asked Msgr. Marini to explain why the crucifix, the symbol of Christ's death, was being given such prominence even at midnight Mass when the church was celebrating Christ's birth.

"The position of the cross at the center of the altar indicates the centrality of the crucifix in the Eucharistic celebration and the exact orientation the entire assembly is called to have during the eucharistic liturgy: We do not look at each other, but at the one who was born, died and rose for us, the Savior," he said. 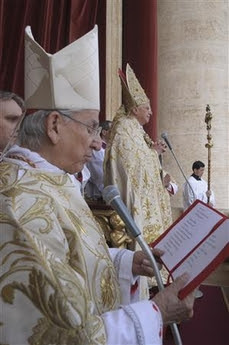 "Salvation comes from the Lord. He is the east, the sun that rises, the one whom we all must watch," Msgr. Marini said.

In his 2000 book, "The Spirit of the Liturgy," Pope Benedict argued that facing the east while praying is a physical expression of turning toward God, toward the sun that rises for the salvation of all men and women.

"Where a direct, common turning toward the east is not possible, the cross can serve as the interior 'east' of the faith. It should stand in the middle of the altar and be the common point of focus for both priest and praying community," he wrote.

As for Pope Benedict's use of older, much taller miters, Msgr. Marini said they are a sign of how the church moves forward in history without ignoring or forgetting its past.

"Just as in his documents, a pope cites the pontiffs who preceded him in order to indicate the continuity of the church's magisterium, so in the liturgical sphere, a pope uses the vestments and sacred furnishings" of previous popes, demonstrating a continuity in prayer, he said. 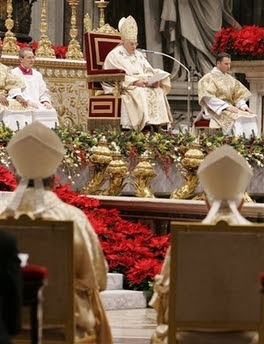 Celebrating Mass, presiding over prayer services and giving his blessing "urbi et orbi" (to the city of Rome and the world), "the pope will wear his own miters, as well as those belonging to Benedict XV, Paul VI, John Paul I and John Paul II," the master of ceremonies said.

One thing that has struck me about what our Holy Father is doing is that he is removing some of the 'cult' of personality from the Vicar of Christ. A sad modern obsession.

Only ever having know John Paul II as pope this was one of the things that he did and said I did not like, or understand. His acts and the liturgy made you focus so much on him as a man. It seemed sometimes that this even had an effect on the teaching, very much man centred.

"My good Lords, when in Queen Mary's days your honour do know right well how the people of this realm did live in order and under law. There was no spoiling of Churches, pulling down of Altars, and most blasphemous treading down of The Sacrament under their feet, and hanging up the knave of clubs in the place thereof. There was no knocking or cutting of the face and legs of the Crucifix, and of the image of Christ. There was no open flesh-eating or shambles-keeping in the Lent and days prohibited. The subjects of this realm, and especially such as were of the honourable council in Queen Mary's days, knew the way to Church or Chapel, and to begin their daily work by calling for help and grace by humble prayer. But now since the coming of our most sovereign and dear lady Queen Elizabeth, by the only preachers and scaffold-players of this new religion all things are changed and turned upside down. Obedience is gone, humility and meekness clean abolished, virtuous, chaste, and straight living abandoned."

In the words of the Prophet Ezekiel: " Her priests have despised my law and have defiled my sanctuaries. Her princes in the midst of her are like wolves ravening the prey, to shed blood and destroy souls." Xxii, 26/27.

The Holy Father in all his writings gets this, as you have said father.

Adv,
As a friend of mine says, the wonderful thing about Bnedict is that he is not "the Great" or "the Good", he is simply "the Pope".

I hope, he encourages priests and bishops to loose themselves in the liturgy and allow it to speak rather than them.

Thank you for the Feckenham quote.

The Holy Father's vestments seem to have delighted the bloggers and caused interest in the secular media. I wonder what the Tablet has to say?

I agree with the comments about Benedict XVI attempting to dismantle the cult of personality around the personage of the Pope. One always had the sense that, for all his high regard for John Paul II, former Cardinal Ratzinger was uncomfortable with way that attention seemed to focus on Karol Wojtyla the man, rather than on the Petrine Office.

Pope Benedict is going about correcting this is many ways, not just liturgically. I think the very choice of the name Benedict was a return to tradition in itself, re-embedding his pontificate in the long line of apostolic succession, after the papal name-experimentation of his two immediate predecessors.

I am sure that Cardinal Ratzinger was also uncomfortable with his own public profile as the "deputy Pope" -- another new departure he would have wanted to nip in the bud. I bet that his appointment of the bland William Levada as his successor was partly motivated by a similar wish to de-emphasize the personage of the Prefect of the CDF.