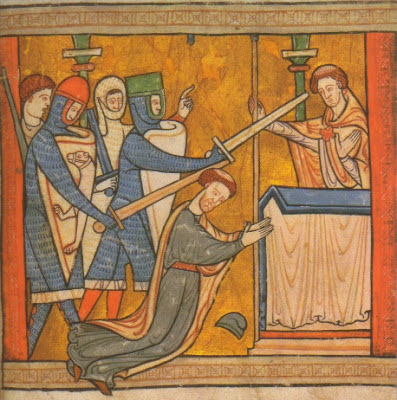 Today is the 5th day of Christmas, I hope you are still keeping the feast.

In 117o St Thomas Becket, Archbishop of Canterbury was hacked to death by three knights in his own Cathedral.
One of the things I love about St Thomas is that he didn't go quietly, he shouted, he swore, he cursed his assailants. Whilst all this was going on the monks continued to sing Vespers. They left his bloody body before the altar where he had been slain.

Only when they recovered their courage and prepared his body for burial did they gradually realise his sanctity. It was the lice that did! Underneath the splendour of his outer vestments they found he wore the rough habit of monk and a hairshirt both full of lice, a sign of ascetism.
They burried his body hastily, very soon the healing miracles began. 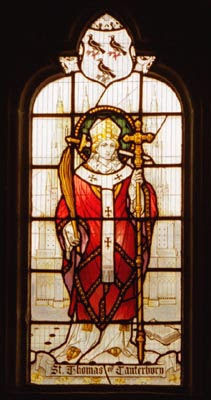 One of the proofs of his holiness that I find amusing is that a monk had a dream about him, in life his Latin was less than perfect, but now he was in heaven it had become perfect, a sure and certain sign of holiness.

It is said tht this great Martyr in the present English calendar is merely an optional commemoration. At the Reformation his glorious shrine was dismantled, his image was the first to be removed from churches, his feast removed the liturgical books and he was declared an enemey of the state.

He is the Patron of the English clergy, he reminds me that priests are supposed to be on the side of the side of the crucified not the crucifiers.
His death led to Magna Carta in ther next but one reign, in which the English Church was guaranteed perpetual freedom and the King's absolute power was restrained by the law.
at December 29, 2007

A truly great Patron of the English clergy. He should be prayed to with renewed fervour in an age when the Hierarchy and some clergy seem to ignore the example of the great martyrs who through the ages fought any attempt to dilute the authority of Christ and the beauty of His liberating Truth.

I think the Church throughout the British Isles finds most of our feasts of martyrs deeply uncomfortable and the feasts seem have drifted out of significance in so many ways.

How often are we reminded of the martyrs of the Reformation for example? Not very ecumenical I fear to die for the beauty of the Truth and love of Christ, but then if it is all about 'man' why would one?

The wonderful thing about St. Thomas is the example that he shows to us for the conversion of life. The of the root of the true resistance to the enemies of Christ. The fight is more effective through the sanctification of oneself and not vainglorious fighting and disputation alone. Perhaps that is the example we should take in all the cases? We must look to how they fought with humility, fought for the glory of Christ alone.

Perhaps if I may offer some quotes from the words and deeds recorded by a secular clerk Edward Grim (to be found in the Roll Series, 1875/83)who was there at the time):

When the monks and crowds tried to lock and close the doors church to the approaching knights and a certain cleric named Hugh Mauclerc (a sub-deacon who is recorded as being one who 'showed no reverence to God or his saints'.)who accompanied them, St. Thomas responded that 'the house of prayer should not be made a fortress... for it is by suffering rather than by fighting that we shall triumph over the enemy; for we are come to suffer and not to resist.'

At the last, it is interesting to note, the attacker that delivered the fifth blow was the cleric Hugh Mauclerk who placed his foot on the neck of the martyr and scattered his brains about the pavement. The Church has always had her enemies within.

I offer finally the words from a carol from the 15th century by one John Audeley:

If I may offer some comments about the 'Mass of St Thomas' in the pre-Pauline Liturgy?

The feast in the calendar was at least a Double (IInd Class and in some places, Ist Class with an Octave of its own).

The Mass (in the now so-called Extraordinary Rite) emphasises the role of Christ as Priest with His priesthood consisting of offering His life to God for the salvation of souls, thus defending the divine rights of the Church He founded. We are reminded that 'the priest is ordained for men in the things that appertain to God: to offer up gifts and sacrifices for sins.'

This, in the season of Christmas, is especially clear and poignant with the manifestation of the Divine Child, the Son of God, as the High Priest, as Epistle of the Mass explains (Heb. 5, 1-6). The linking of the Birth and the Cross, the Sacrifice.

The Gospel is taken from John (10, 11-16) and shows how St Thomas in his participation of the dignity of the Christ-Priest defended his flock against the 'ravages of the wolf' as the Good Shepard should.

The 'tone' of the Liturgy rejoices in the fact that the shepherd, the great priest, keeps the law of God (Gradual: Ecclus, 44, 16-20)and must emulate the High Priest. He must protect his flock and we are encouraged not to use politics or warfare to defend the Church but to follow the example of St. Thomas 'who fell by the swords of the wicked' (Collect).

Many thanks to Fr. Ray for this post and to ADV for his erudite comments.

To those who have not read it, could I recommend "Thomas Becket" by Frank Barlow.

It is a biography, not a hagiography, but it has been written by an accomplished medieval historian.

For book collectors, The Folio Society published a fine edition of this book.

Another good work is that of Howard Loxton, 'Pilgrimage to Canterbury' (1978), though I am not sure how easy it is to come by outside of academic circles.

I notice that the Folio Society website (http://www.foliosoc.co.uk) is showing Barlow's book on sale for £24.95.

A former parish priest is a descendant of one of the four knights. He was given a relic of St Thomas and we used to venerate it on this day. This was the origin of the St Thomas Fund for the homeless in Brighton.

The existence of the relic is itself odd, as the contents of the reliquary at Canterbury were destroyed at the order of Henry VIII. However, relics had been given to the Papal Legate and the King of France on the occasion of a visit, and these ended up in Rome and at a monastery in France. The latter came back to Canterbury, I believe.

Interesting little piece but why didn't you illustrate it with our own stained glass window?
IMAGE OF ST THOMAS IN STAINED GLASS

Henry,
Fr Mark seems to taken the relic of St Thomas with him, the one we venerated today was given to me as an ordination present.
IT IS NOT THE PARISH'S!
It is from the cranium which did indeed end up in Rome, mine came from the fragment of this that is still there, through "The Office of Relics".
Henry, I have added you photograph to the post.

Now Henry mentions it, there is - or was until fairly recently - also a relic of St. Thomas Beckett at Ladyewell house at Fernyhalgh, near Preston. I think the relic was also a piece of the saint's cranium. The shrine at the house used to be open to visitors: I don't know whether it still is and I can't find any information on line. Do any readers know whether it is still open to visitors?