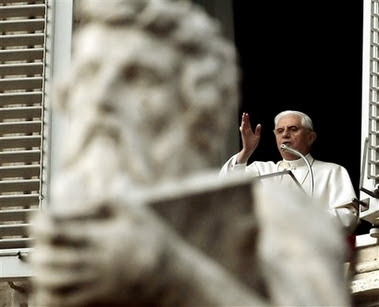 Zenit The world needs God, otherwise it remains without hope, said Benedict XVI when he summarized the central message of his encyclical "Spe Salvi."

The Pope said this today before reciting the midday Angelus with those gathered in St. Peter's Square. He also spoke on the meaning of Advent, which begins today.

Advent, the Holy Father said, "is the propitious time to reawaken in our hearts the expectation of him 'who is, who was and who is coming.'"

The Pontiff regarded the First Sunday of Advent as "a most appropriate day to offer to the whole Church and all men of good will my second encyclical, which I wanted to dedicate to the theme of Christian hope."

Benedict XVI noted that in the New Testament "the word hope is closely connected with the word faith." Hope, he added, "is a gift that changes the life of those who receive it, as the experience of so many saints demonstrates."

He asked: "In what does this hope consist that is so great and so 'trustworthy' as to make us say that 'in it' we have 'salvation'?

"In substance it consists in the knowledge of God, in the discovery of his heart as a good and merciful Father."

"With his death on the cross and his resurrection," added the Pope, Jesus "has revealed to us his countenance, the countenance of a God so great in love as to communicate to us an indestructible hope, a hope that not even death can crack, because the life of those who entrust themselves to this Father always opens onto the perspective of eternal beatitude."

The Pope, as he also did in the encyclical, observed that the "development of modern science has confined faith and hope more and more to the private and individual sphere, so much so that today it appears in an evident way, and sometimes dramatically, that the world needs God -- the true God! -- otherwise it remains deprived of hope."

"Science contributes much to the good of humanity -- without a doubt -- but it is not able to redeem humanity," he continued. "Man is redeemed by love, which renders social life good and beautiful.

"Because of this, the great hope, that one that is full and definitive, is guaranteed by God, by God who is love, who has visited us in Jesus and given his life to us, and in Jesus he will return at the end of time. It is in Christ that we hope and it is him that we await!"

The Holy Father concluded his address with an invitation to live this hope in Advent "with works of charity, because hope, like faith, is demonstrated in love."
at December 03, 2007