Spe Salvi: The Re-Orientation of the Church 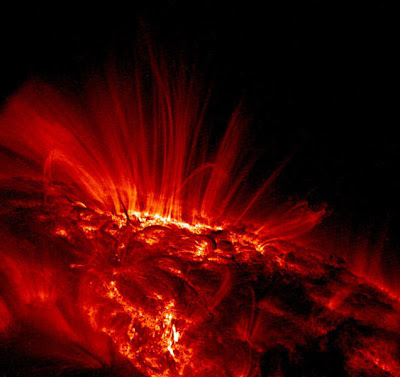 “End of the World is nigh” used to be the cry of rather frightening Protestant street evangelists.

Today most Christians seem to have given up any talk of “end issues”. Today it is the more likely to be the preserve of the Green Party, or some kind of ecological group predicting the downward destructive direction of mankind that will end in oblivion, ultimately an even more depressing message than Calvinism. Mainstream Christians steer clear of such talk but it is the message of Advent.


The early creeds of the Church, seemed to hang on those short phrases we use as acclamations after the Consecration, “Dying You destroyed our death. Rising you restored our Life. Lord Jesus come in Glory”. From the Epistles, both of St Paul and others in the New Testament this seems to be pretty much all that was important about Jesus in their preaching and teaching, and more-or-less all that was needed for Baptism and consequently membership of the Christian community. Death, Resurrection and future Coming were and should be the core of the Christian faith.


The Resurrection, life everlasting seems for many Catholics, an embarrassment. Pre-Concilliar Catholics had a certainty about the Resurrection of the Dead, Judgement, Heaven and Hell. Purgatory, the intercession of the Church were givens. Catholics knew what they had to look forward to after death, and consequently what mankind was about. The Catholic Church spoke with authority about mankind’s end.


The Second Vatican Council brought about a transition in our eschatological thinking, the here and now dominated the life of the Church. Death and suffering were quickly skated over, being replaced by universalist resurrection. Our liturgy became increasingly horizontal, our concern for mankind too. There was a great movement to better the human condition, which flowered into, what at its worst, can be the most horizantalist theology of all, the Liberation Theology of some South Americans or Asians, which seems to replace Christ by some sort of Common Good, or even Marxist Utopianism. The great evangelical and missionary endeavours of the Church faded away almost overnight, the idea of the necessity to seek Salvation, or even to offer it vanished.


Spe Salvi seems to want to address these issues. Some commentators have noted that the Pope ignores any reference to Gaudium et Spes or any other document of Vatican II. He is plugging an important gap, the mention of “soul” or “souls” is almost absent in the Councils Documents, Spe Salvi uses the term twenty odd times.


In The Spirit of the Liturgy he urged the re-orientation of the Liturgy, away from the smug self satisfied, inward looking, congregationalism that seems to be a mark of what we find in most celebrations today and towards something which is centred on the Cosmic Christ. His model is the “Pilgrim People” in procession to the Eternal Father, which was the symbolic value of Eastward facing prayer, from the earliest times.


In this new encyclical he is doing the same, re-orientating the Church, by using a theology that pre-dates the Council of the 1960s, with its theology of the 1930s, filtered through the Second World War. He is doing precisely what Vatican II urged. He is returning to the scriptures and the Fathers of the Church, his theology comes from the first Millennium. The function of the Church is not primarily the bettering of mankind in a mundane way but offering Salvation. The Hope he speaks about is the person Jesus Christ and the fullness of Life he gives for all Eternity.
at December 02, 2007

I have always associated the cry "The End is nigh" with street-corner cranks and placards, or with those millenarians who go and sit on mountain tops to await the end.

I was always taught that what Catholics should expect, and be ready for, (at any time,) is the Second Coming.

The Second Coming manifests in a glorious and decisive way Christ's triumph and the completion of his work of salvation.

That is why I think "Turning Towards The Lord" is a timely way to prepare ourselves.

Thankyou for 'pulling out' the important points for the layman..will pray for you on my upcoming retreat..that you can continue such a wonderful ministry to us bloggers!

"The great evangelical and missionary endeavours of the Church faded away almost overnight..."

I used to think this was due to the end of colonialism, but when I came to Europe I realised that evangelisation had stopped here too.

Thank you once again, Fr. Blake. Your sight is a great blessing.

This may sound cynical, but I write it because it was actually former Cardinal Ratzinger's writings that lead me, indirectly, to these conclusions.

I have always thought that the simplest explanation for the change of theological emphasis in the in the mid-20th century is pride and embarrassment. It is not that we refrain from speaking of the “end times” because our theology has shifted; rather, we shifted our theology so we no longer had to talk about the end times. In brief, an important segment of the Church elite had essentially become embarrassed by a creed that seemed more archaic and irrelevant everyday. They wanted something more palatable, and so gave it to themselves, within what seemed to be acceptable boundaries. Some of the changes were implemented by holy men with very good intentions. Some were implemented by confused men with very bad intentions. But on the whole, I think the endeavor was short sighted and prideful.

As this Encyclical alludes, the folly of the early 20th century man was that he thought that he had finally progressed to a point where he could see things as they really were and change all things for the better according to his enlightened will. He was no longer shackled by meaningless tradition. It shows in the pompous art, ill-conceived architecture, the destructive politics, the relativistic ethics, and everything else that that generation touched. I think the Council, while protected from error, was not immune to this pride.

Many young and good men (see young Ratzinger) went along with the program because they were young, it was exciting, and seemed to be the Church's will. Those who didn't agree were more or less ignored. However, for those with eyes to see (see the older Ratzinger), the fruits of the Council were lacking.

I think the changes did not “reform and renew” the Church because they were never really meant to- they were meant to make the Church more digestible, less offensive, more- well, modern. So now we are stuck talking endlessly about "implementing the will of the Council fathers," when in reality, it is not really clear what that would mean at all. In fact, this call seems more and more like a diversionary argument because criticism of the Council is a non-starter for many. What people are really saying is that, whatever the Council says, we have to interpret it so that it does not conflict with Tradition, if this means twisting, straining, or marginalizing it, so be it, because it is essentially pastoral anyway.

While even the good Councils throughout history needed time to be implemented, it is a fact that there were truly ineffective- and even counter-productive- Councils. (Did they err? No.) The usual flaw was malleable language. I think that Vatican II is a case study in malleable language, and that its pastoral directives, taken as a whole, need to be abandoned for the clearer teachings of the past and present. In other words, we need to move away from being a “Post-Concilliar” Church and start being a Universal (as in all times and all places) Church again.

Cosmos,
I agree totally with you.
Vatican II, is perhaps more problematic than other Council, simply becuse issued a tremendous amount of teaching which needed interpretation. The interpreters became King. Other Councils that issued a summary in the form of anathemas, at least highlighted the essential elements of their teaching. the absense of such statements left confusion.

A statement of Martin Luther's comes to mind, "Before the Reformation there was one Pope sitting on the seven hills claiming the authority of Christ, now, in Germany every dunghill has seven popes sitting upon it claiming the same authority".

"Now, in Germany every dunghill has seven popes sitting upon it claiming the same authority".

The modernized version would be "a committee of seven." Nothing ever gets ruined these days without a committee. The power of these "interpreters" to reinterpret, diffuse, or simply obfuscate change from the top is staggering. If it is frustrating to us, it must be an incredible cross for the Pope himself.

Referring back to your comments on the new encyclical... another breathtaking part of Benedict's papcy is that he is restoring the Church to its proper place as a "contradiction" to the world. His mind is so sharp, and his teaching and scholarly analysis are so thorough and lucid, yet he always manages to "preach Christ and Christ crucified" when all is said and done.

Perhaps a better way of saying it is he is restoring proper order to to the Church's teaching. I am trying to make a connection to the Augustian(?) idea of disordered passions. I remember being deeply struck when some Christian first told me that most of our desires are essentially good, but tend to evil when they are not properly ordered. Fisrt things first. The easiest example: sex is good, but only within the proper understanding of the person as the image of God, and marraige as a sacramental act aimed at procreation, must come first or one will inevitably distort the act.

Ecumenicism, inclusivity, inculturation, dialogue are all good, but only in right relation to those more central tenets of our faith that you noted in your post: "Lord, By your Cross and Resurrection, you have set us free. You are the Savior of the world." Two people can talk about ecumenicism, say the exact same thing, but project extremely different worldviews depending on their first principles.

Benedict confuses people because he has neither continued the exultation of those lesser goods, nor tried to eradicate them altogether. Rather, he wants to put them back in their right place-the proper order. This is an immense service, that will require prudence and patience that few men possess.

We know the Church will almost fail and that there will be a great apostasy near the end. The world will demand that the Church turns towards it, and away from Christ. By turning towards the world we loose everything. I hope our great Pope is successful and we turn towards the Lord. Otherwise, I think we hasten towards the Second Coming at our peril.