US Bishops and Pullman's film

The US Episcopal Conference Website aparrently does film reviews, I have a wonderul image of their Excellencies eating popcorn in purple zuchetti and the clank of pectoral crossses, irritating other film goers as the discuss a new production. They reviewed the Golden Compass recently and didn't see any problem with it consequently the ad department of The Golden Compasss 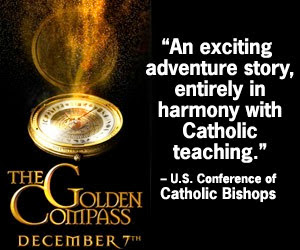 has been advedrtising in the American Catholic press.

Although the film makers have obviously removed the more atheistic elements of the film, the film draws attention to Pullman's books, which are for children. They are banned in our school.

However this little piece from Bonfire of the Vanities reveals Pullman's intentions, and they are not nice.

The film is based on the works of author Phil Pullman, who has written a series of entertaining stories called "His Dark Materials." In his own words: "‘I'm trying to undermine the basis of Christian belief,’ says Pullman. ‘Mr. Lewis [C.S. Lewis, author of The Chronicles of Narnia] would think I was doing the devil's work’" (from the Washington Post, Feb. 19, 2001). And, "I've been surprised by how little criticism I've got. Harry Potter's been taking all the flak…. Meanwhile, I've been flying under the radar, saying things that are far more subversive than anything poor old Harry has said. My books are about killing God" (from the Sydney Morning Herald, Dec. 13, 2003). Now that he is getting criticism, Mr. Pullman is telling a very different story.

I read Northern Lights and thought it was not a very good book anyway. Starts off well with the little orphan girl who lives in the attic at an Oxford college but then it all goes to pieces and does not add up.

It needs to be read and deconstructed.

Here an interesting explanation about the deceptive ad. The USCCB did not give his blessing to the film, at all.

The Catholic League have been warning the faithful about this film for some time now. Perhaps, the bishops don't consider themselves to be very 'faithful', if this is truly their view?!