Pope Decries 'Pleasure at All Costs' 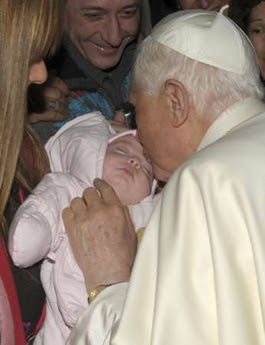 ROME (AP) — Pope Benedict XVI warned Sunday against seeking happiness in drugs or other "artificial paradises" and the self-centered quest for "pleasure at all costs."
Instead, the pope held up Mother Teresa — the Roman Catholic nun who devoted her life to serving the poor in India and elsewhere — as an example.
"Every day, she lived next to misery, human degradation and death," the pope told thousands of faithful gathered in St. Peter's Square. "Yet, she offered the smile of God to everybody."
The pope, speaking during the traditional Sunday noon Angelus prayer, said real happiness cannot be found in cultures "that put individual happiness in the place of God, a mentality that has its emblematic effect in the quest for pleasure at all costs, in the spread of the use of drugs as an escape, a shelter in artificial paradises, which turn out to be completely illusory."
In an annual tradition, children came to St. Peter's Square bearing Nativity figures of baby Jesus for the pontiff to bless.
Earlier Sunday, Benedict consecrated a new church on the outskirts of Rome, blessing the parish's children.
at December 17, 2007

This is so true, I see people all around me in denial of God and in full acceptance of everything alternative to God. Drugs are what they use to give their lives some backbone. But I see them collapsing under their own ways. I have found since becoming a Catholic that people too often deny God and his Grace, yet they thank him, they proclaim to pray to then indicate the Church to be nothing spectacular but on discussing with them how my life has changed, a few will actually listen and put forward some thought. There is no way to eternal happiness unless it through God, our lives can be made happy by ourselves, but as the Pope said, this is not real, and as i have seen, it is only short lived leaving one longing for something deeper. One can find this in God as he is always the highest and strongest.
Happy Chrismas to all in the parish.

That is beautiful James, thanks for that.