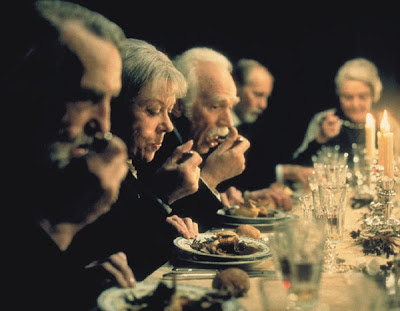 The picture is taken from one of my favourite film's Babette's Feast, it is wonderful, it is about a French woman who ends up in a rather douer protestant village, which is full of resentments. She organises a splendid feast, she had been in cook in Parisian restaurant. As her guests eat and enjoy good things they are transformed. For me it is a little vision of Heaven, and the action of grace, an image of what partying and Christian feasting should be about.
I found the little provocative quote below on Tea at the Trianon.
I wonder if, at least impart the strict Jewish dietary regulations are actually about making reparation for Adam and Eve's unbridled eating.
Feasting and fasting were so much part of Christian life, I wonder if it is time to think of restoring this rhythm, which really serves to highlight the feasting. Fasting has lost its religious meaning, no longer is it about curbing our "fleshy appetites" or even doing penance to share in the Cross of Christ, at best it has become an act of solidarity with the poor, which then produces guilt ridden feasting, so un-Catholic. To seperate feasting and fasting from the Sacred Liturgy diminishes the richness of both.
While I am on the subject, as footnote, the one hour's fast before receiving Holy Communion is actually a minimum, if one can fast from midnight or for three hours before Communion and a subsequent good breakfast, it is a very good and commendable thing.
If you fast, remember you must also feast.

Many pietistic souls will be surprised to learn that throughout Scripture eating and drinking are regularly associated with events of the highest theological and spiritual importance. The Bible opens with man's fall -- described in terms of choosing to eat not what God had provided but what he had forbidden; it ends with the Marriage Supper of the Lamb, eschatologically restoring Eden and ushering in the new Heaven and new earth (Rev. 19:9).
The prime representation of grace under the Old Covenant was the Passover meal, and it foreshadowed the Sacrament of the Eucharist, which our Lord expressly connects with the eternal Marriage Supper (Mt. 26:29 and parallels). The centrality of feasting in the early Church is evidenced by her agapes or love feasts, and the observance of the "feasts" or "festivals" of the saints has been a vital part of Christian worship in all the historic confessional traditions.

Great point re: if you fast you must feast -- both ends being enriched by the practice of the other. And of course there were other stories involved with feeding/miracles - Cana, loaves and fishes etc.