Sanctifying the Clergy and Promoting Vocations 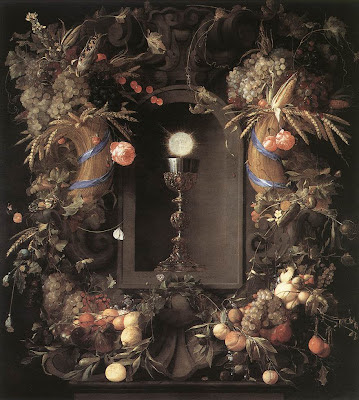 I reported a bit on this story last week. I am so glad that the Congregation for the Clergy has taken this initiative, in most dioceses both in England and abroad the response both to the lack of sanctity of the clergy and the shortage of vocations is to set in place "management structures".
The lack of sanctity shown in the sexual scandals has produced in England in every diocese "child protection" departments, which actually do little to protect children and vulnerable adults but a great deal to protect the bishops and the Church as an institution. The lack of vocations is dealt with by management of decline; amalgamating parishes, cutting the number of Masses, expecting aging priests to do even more work.

Nowhere that I know of does a bishop, say, "we rely on God". Indeed this "management of decline" seems to say precisely the opposite, it is a faithless, hopeless response. At worst it ,produces its own theology, which says "God wants less priests, aren't we fortunate, it enables the laity to take on more responsibility". The truth is that of course there are less able and active laity.

I have always believed that the response of the great saintly bishops like St Charles Borromeo would be to order fasts and penance and prayer throughout their diocese. Cardinal Hummes solution is to command bishops to pray, to rely on the mercy of God, to say that the solution depends on a deepening of popular piety. The management solution removes God, and as far I can see, merely hastens the decline, the faith solution put forward by Rome deepens the life of the Church.

I am not suggesting of course that we should not be prudent but if we do not rely on the help of God we might as well be atheists collectivising farms rather than Pastors of the flock of Christ.

(CWNews.com) - The Vatican has launched a campaign of prayer-- specifically, Eucharistic adoration-- for a spiritual revival among the world's priests.

The Congregation for Clergy, in a document released on December 8, calls for a major worldwide drive to promote Eucharistic adoration "for the reparation of faults and sanctification of priests."

In a document issued on December 8, the Congregation for Clergy urges diocesan bishops throughout the world to join in the prayer campaign, and recommends specific steps that should be taken to foster a spirit of Eucharistic adoration.

In response to troubles within the ranks of the clergy, the Congregation acknowledges that "a great many things are necessary," but announces its plan "for the departure point to be a spiritual endeavor."

A spiritual renewal will only come through prayer, the document argues. The Congregation for Clergy notes that Pope Benedict XVI (bio - news), in the apostolic exhortation Sacramentum Caritatis, strongly recommended Eucharistic adoration as an apt and effective form of prayer for priestly vocations.

The Vatican directive-- signed by Cardinal Claudio Hummes and Archbishop Mauro Piacenza: the prefect and secretary, respectively, of the Congregation for Clergy-- explains:


In order to continually maintain a greater awareness of the ontological link between the Eucharist and the Priesthood, and in order to recognize the special maternity of the Blessed Virgin Mary for each Priest, it is our intention to bring about a connection between perpetual Eucharistic adoration for the reparation of faults and sanctification of priests.
The letter from the Congregation for Clergy is dated December 8, the feast of the Immaculate Conception. In explaining their plan, Cardinal Hummes and Archbishop Piacenza make it clear that this was no coincidence, saying that the "intend in a very particular way to entrust all Priests to Mary, the Mother of the High and Eternal Priest."

The Vatican asks every diocesan bishop to promote the new program by appointing a priest "who will devote himself full-time, as far as possible, to the specific ministry of promoting Eucharistic adoration and coordinating this important service in the diocese." The document goes on to say: "Just as there are Marian shrines, with rectors in charge of that particular ministry and suitable for it specific needs, it is also possible to have Eucharistic shrines."

[A pamphlet produced by the Congregation for Clergy, outlining the details of the "Prayer for Priests" campaign, can be found on the Congregation's web site, which is currently under development.]
at December 11, 2007

You're spot on as usual with this Father. My main concern is that Eccleston Square (assuming the existence of the document is acknowledged) will tell us that "this does not apply in England and Wales".

Meanwhile, the rest of us will carry on praying for our priests and for an increase in a willing acceptance of the vocations God is surely calling.

I welcome the idea of having a specific Eucharistic shrine in each locality. What a wonderful idea.

Because so many churches are unable to remain open all day because of the threat of vandalism, the idea of having one such specific shrine in any area would be truly magnificent.

After many years I have been lucky enough to discover a local church where Exposition of the Blessed Sacrament takes place each week. While going through a difficult period of my life, this has given me strength and peace and acceptance.

Incidentally I am curious to know why one hour is always chosen for Exposition? Not 20 minutes - nor 1 l/2 hours? Is there a historical or ecclesiastical reason?

The American Bishop Fulton Sheen died in his chapel before the Blessed Sacrament. He had spent one hour in His presence every day of his long life since his ordination - what a wonderful example to us all.

Great post Father. Reminds me to pray for my Bishop and priests. Some of them must feel so hopeless and despairing at present.

The twisting of decay into a positive is particularly dangerous. It is the very act of Satan in the garden. Knowing what was presented was against God's Wiil, Satan pointed to the positive aspects of consuming the apple. Adam and Eve stopped thinking about God's Will and instead were encouraged to consider all the great things associated with just a little bite.

The world put enormous pressure on people to think this way. I could not count how many self awareness books and psychologists that promote this way of thinking. However, underlying it all is the truth that you have pointed out. Underlying it is a belief that there is not a specific Way, a specific Truth, a specific Life for man to follow (a denial of Jesus Christ). Also, underlying it is a belief that man can define for himself Gods Will ( man becomes God). It's almost as if we are back in the garden and we never knew our Lord Jesus Christ.

Praying for vocations and the sanctification of priests, offering things up, indulgences in Lourdes; soon we will all be Catholic.
Thank God for Benedict!

Once again Father you have hit the nail squarely on the head with a common sense and practical analysis of an "Emperor's New Clothes" situation in which our bishops are deluding themselves and us when the solution is staring them in the face. Prayer must hold the key and particularly devotion to the Blessed Sacrament. I am shocked when I find Catholic Churches locked during the day, so much so that my security company actually now offers free security reviews to Catholic parishes who want to be able to keep their churches open but are fearful of crime. Where churches are open, people come in to pray, to light candles, to spend time before the Blessed Sacrament. All the committees in the world at Eccleston Square will not make one iota of difference but as the experience of the USA has shown Eucharistic adoration produces vocations by the busload.

Re the protection of children..i wish the Bishops would make sure our children are protected from sex education programmes...sick that they are used in our Catholic schools...

With large numbers of Polish immigrants coming in, surely the bishops could also import priests from Poland as a short term solution? However a priest friend of mine candidly told me that the bishops will have none of them, as Polish priests are not 'in the Spirit of Vatican II'!

The initiative from the Vatican to address the problems of the priesthood by recourse to the Blessed Sacrament is an excellent idea and will certainly bear fruit, if enough people embrace it. But there's the rub. The downplaying of the Eucharist -- and the constraining of its potential -- is the root cause of the problem, is it not?

If Catholics do not understand or value the Blessed Sacrament, they cannot adequately understand or value the priesthood. If priests do not accept the importance of their role in relation to the Holy Sacrifice, they are more likely to go astray. And if the laity is "empowered" and engages in unfettered "lay ministry," if the "gathering of the assembly" (rather than the act of consecration by the priest) is what brings Christ among us, and if ecumenism must be pursued whatever the cost, why get so worked up about the priest shortage anyway? The insouciance on the part of so many bishops surely reflects their own defective understanding of the role of the sacramental priesthood.

I agree with your analysis of the problem of managed decline. Correlli Barnett -- famous for his studies of the decline of Britain -- would recognize a similar "retreat from Empire" syndrome in the way that contemporary English Catholicism is addressing its priest (and laity) shortages simply by institutional downsizing. Traditional remedies -- ardent prayer, eucharistic adoration, devotions, public consecrations -- are not even considered, treated as if abrogated by Vatican II (or some kind of a threat to it).

The great irony is that many bishops who adopt a consistently anti-Vatican line and voice their disdain for the Curia are often the first to create sprawling diocesan bureaucracies of their own. Such entities are often a million miles from authentic Catholicism. They look and sound just like secular social welfare bodies -- long on "equality," "justice" and "diversity" but otherwise spiritually impoverished and acting as dampener on the priesthood by conforming it to secular management structures.

This new initiative will be a bottom-up effort led by individual priests in their parishes and lay people who take up the challenge. Don't wait for any show of leadership from the senior management group in the local hierarchy.

And let us hope that if there is devotion to the Blessed Sacrament outside Mass there will be increased respect and devotion during Mass itself.

Occasionally, I have the good fortune to visit St Anthony's Church in Edgware, where there seems to be Exposition of the Blessed Sacrament throughout the day. Whenever I have visited there have always been some people praying, and often many. This even occurs on Christmas Day, as I saw last year. It was impressive to see many people visiting in the evening - and for me it was a highlight of the day after overeating and being generally too self-indulgent.