Paulinus reports on a piece in the Observer, which claims that our bishops are going to face a parliamentary inquisition looking at Catholic "fundamentalism".
It would seem that they think there is something odd about Catholics wanting to pass on their faith to their children. Some MPs are concerned about Catholics not pushing same sex partnerships, but upholding Catholic teaching on marriage and family life, or not being entusiastic about having anti-Catholic polemics in school libraries. 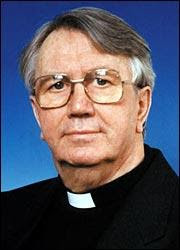 As the Cardinal says, "they want the fruit but withour the root". I don't know much about other Catholic schools, I am very wary of Catholic Secondary schools, who really do seem to have lost their sense of Mission, but I do know that our parish Primary School is pretty good. It is good because our teachers have real values that they pass on. They believe in the sanctity of the family, they believe in the dignity of the human person. They actually believe in the importance of passing on the Catholic faith.
at December 31, 2007

I would attend but refuse to answer any questions, berate their many sins and iniquities, demand the posthumous pardons of the Blessed Martyrs St John Fisher and former Lord Chancellor St Thomas More, and state that teaching about the lives of the English Martyrs would become a fundamental part of education in all Catholic schools and if they tried to stop it the Bishops would willingly go to prison rather than accede to having Catholic education interfered with. That would give them all something to jump up and down about.

Probably wouldn't be very productive, but the point I am trying to make was that if they really did think we were a bunch of fundamentalists, they would be far too frightened of us to criticise us or pass anti catholic laws.....

I hope that whichever Bishop appears before the Committee will take it upon himself - for in fact it is upon him - to remind the Committee that Parliament has the duty to serve God and legislate according to the Christian religion, and not otherwise.

I pray for the English Church.

This must go down as one tf the most ignorant comments of 2007 from someone who is supposed to understand eudcation in this country: 'It seems to me that faith education works all right as long as people are not that serious about their faith. But as soon as there is a more doctrinaire attitude questions have to be asked. It does become worrying when you get a new push from more fundamentalist bishops. This is taxpayers' money after all.' (Barry Sheerman, Chairman of the All Party group on Schools etc)

Frankly, I find this scary. It's this bullying govt that is fundamentalist.
As for Barry Sheerman-he comes across as not very bright-and that is scarier still if he is in charge of education!

Faith Schools are always at the top of the Education" League Tables" because there is more discipline and respect for the Ten Commandments.If they want us all to be the same and leave school, unable to read and write,cynical,uncommunicative and lacking respect for all thats good then they are going the right way about it.Constantly messing about with the Education System is doing more damage than any "Global Warming" or "Climate Change".Those responsible must be Pinpointed and VOTED OUT

Is there any sex ed in your Catholic Primary..i mean ANY?

It's coming - this country will ultimately end up a catholic hating tyranny.
look at the poor Lutheran pastor in germany , imprisoned for comparing abortion to genocide - how long have we to wait before we're all rounded up for saying the same thing ?