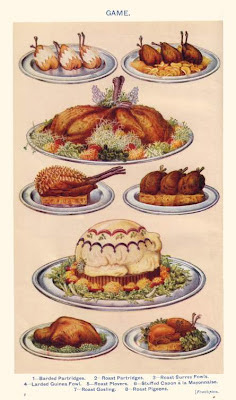 I hate the secularisation of Christmas; I had a letter from an associate who said he was going to have nothing to do with presents, turkeys, mince pies and such like fripperies.
I suspect that for many of old celibates that Christmas is a bit depressing because in a way it belongs to childhood. My mother always tried to recreate the Christmas of my childhood. “I have got... because I know you love it”, I always wanted to say, “Yes, mum, when I was six I thought it was delicious but I am forty-six now”.
I hope I never did say that but I might have.

I had an aunt on my father’s side, she was a Surrey country woman, she lived in the villages around Guildford and Godalming all her life. She was the daughter of a farmer. She had the hint of that distinctive Surrey accent which is almost lost nowadays until the day she died.
She used to make the most odd Christmas mince pies, I think they must have had a very traditional past, I just can’t imagine her being original in her cooking.
They were made with the type of pastry that was normally used for pork pies, but it had tons of ground ginger in it, so it became like a ginger biscuit, she used to make her own mincemeat, always made the year before which had packets of ground cloves in it, and I think there was actually meat in it too. They were oblong with rounded ends and the tops had an image of a haloed baby scratched on the top. They were quite big about the size of a Cornish pasty. When they came out of the oven the whole house smelt of spices. The smell was wonderful though I think they didn’t taste very nice.
I am sure these were the type of mince pies that Cromwell wanted to suppress, redolent of popery and the visit of the Magi.
Presents for her, when we were younger and less sophisticated were always handmade, knitted generally, taking hours of patience and love.
I can’t remember if we had turkey, I have memories of brawn made out of pigs heads, and rabbits or hare and “stray” pheasants rotting gently hung up in a shed. I remember a Surrey landowner saying that his gamekeepers always turned a blind eye for the weeks before Christmas, there were always wounded birds in the hedgerows around that time of year.
at December 19, 2007

As a cleric manque, I always long for the opportunity to spend Advent quietly with my Breviary, culminating in Conventual High Mass on Christmas Day, instead of it being filled with anxiety about money, arrangements, getting things done on time (which I never manage to do) and dismay over the crass pre-"Xmas" secular rigmarole. Even domestic tranquility would be nice for a change, instead of everything being chaotically upside-down.

This year seems much less commercialised with a deliberate counter attack against rampant consumerism..at least in our house! Our Priests live in community..what do ordinary Parish Priests do for dinner Christmas Day..have family round? Wouldn't like to have you on your own Fr..

Jackie,
I am celebrating Christmas, here. My excellent pastoral assistant, Br Francis, is cooking lunch, and a retired priest, and another priest and his recently widowed mother are coming. It can be a bit lonely for a priest after the last Mass, especially nowadays when most priests are living on their own.

Ben,
In a monastery you might get to spend Advent quietly, not quite the situation for a secular priesst.
I think for us Catholics at least, we can keep the days of the feast with feasting and celebration. The Jan. sales migh intrude a bit, but for the most part we can truly celebrate Christmas.
I suppose Advent has indeed for most of us .... - thought for another post.

Oh i'm glad about that Fr Ray..i bet you're a great conversationalist!

I can assure Ben. and others that the longed for quiet does not come. I speak from experience. I am expected to go to the house of one of my sons and spend the day with in-laws and grandchildren and the mountain of presents etc. which are simply not needed. I really have no problem having myself for company. I am never bored and I don't yearn for company.
JARay