Blow up Church saturno tip to Thorn in the Pew 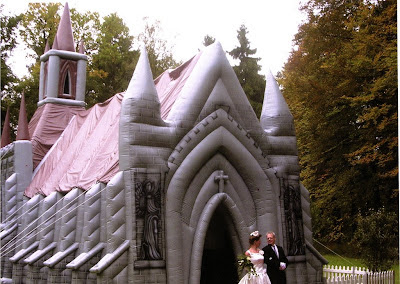 When I was a seminarian, I rather annoyed my then Bishop. He had decided to start a thing called "Renew", imported from New Jersey, there were lots of "ideas" for "Liturgies" and "small group sharings", and "comunity events". Some of which were not half bad, a lot of it was quite risable.
Knowing gentle mockery is often such an effective weapon especially in the Church where we all take ourselves a little too seriously, some of us started a counter movement called "React".
Renew had a logo of an oak tree with six acorns: "React" had a oak tree with six papal tiaras on it.
There were lots of useful suggestions, one I remember was pouring hot coffee into the sound hole of a guitar. There was a "Renew Song". We produced "Canticles of Reaction (and derision)" most of which were a gentle mockery of the then contemporary hymns. One of my contributions was a suggestion for inflatable Gothic churches, in places were ghastly monstrosities were being built.
I know the Archbishop of .... fell about laughing when someone gave him a copy of "React", he was an avid reader as new material came out, my own bishop was less than amused.
Sorry Your Eminence, I was responsible along with Frs F and S, I am sure you suspected it all along.
I think most people have forgotten about "Renew" now but I am glad the inflatable Church has finally seen the light of day.
at December 21, 2007

All the same tired old stuff has now been imposed on his new (Arch)Diocese!

There would have to be a 'No Candles allowed' sign otherwise the 'church' would either melt or explode!
I remember when 'Renew' was introduced - it did not appeal to me at all and I'm not surprised to learn that it came from the USA. I see from Fr Z that it would appear that the USA is now ahead of Britain in the other direction with news of TLM Masses (or should that be TLMs?) being celebrated in many areas.

Another wonderful example of your "prophetic" ministry. ffn

Can anything good come out of the USA?

How could I forget Renew?

In my parish church, Our Lady of Lourdes was removed from her plinth of over 100 years in order to make way for the Renew shrub. It was a pathetic looking thing with the Renew logo sellotaped to its pot. Nobody remembered to water it, so within three weeks it was as barren as a brick. Nobody noticed. It was still there, looking like a victim of ecclesiological Agent Orange, during the ridiculous sermon preached by our Irish PP against those who had criticised the programme, whom he denmounced from the pulpit as "agents of the Devil".

Oh, gag.
Do I remember Renew!

It was the beginning of the bad times for many parishes.

It had its own special prayer, too, as I recall.

How did I miss "Renew" or did I just ignore it?

Fr. Ray: Can I safely infer that Fr. you are firmly ensconced enough not to have to worry about being shipped to Land's End, or being sent on a mission to count the pebbles in John O'Groats. That or you have pictures of a few Bishops with lampshades on their heads if things got "out of hand" at any deanery parties.

Don't forget Christina the Astonishing, the Holy Patroness of React. I remember getting copies of some of the stuff Fr Michael, may he rest in peace, produced and photocopying it for lots of my friends, including one of Cormac's present auxilliaries.

I remember Renew. It was rather full of hot air.

I've been in that church. They had it at Greenbelt a couple of years ago. I went in thinking it was a prayer place-but it wasn't. It was empty but for a couple of women with pamphlets in a crate. Then the spire went limp...all very Renew really.

Only just catching up with your blog after being very restrained during Advent: I gave up blogs instead of chocs.

Do you remember the t-shirts that were fashionable in the 80s when Frankie Goes To Hollywood were top of the pops? When his Eminence launched Renew II (or whatever they called it) in Westminster, I photoshopped some pictures of white t-shirts with the legend: FRANKIE SAY RENEW (DON'T DO IT) and left them around the parish hall.