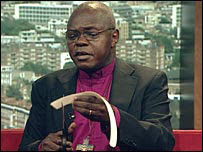 The Anglican Archbishop of York has cut up his dog collar and said he will not replace it until Zimbabwe's President Robert Mugabe is out of office.

I have always been quite pro Sentamu but frankly this strikes me as being plain silly, I am sure that this stunt is going to put Mugabe off his breakfast orange juice. I might join him by giving up wearing a vest, or maybe a bowler hat. It reminds me of the Irish Bishop who gave up wearing a mitre until young people returned to church, I think this particular prelate is still bear headed. If he decided to go barefooted, or to wear a hairshirt it might be more of sign.

Whilst we are on "clerical collars" by the way, there is really no such thing. What priests wear are "roman collars", a 19th century Roman fashion. Not only priests but Italian policemen (and women) and Italian soldiers still wear them, I think firemen/women do too. Basically they are worn under any garment that has a high stand-up collar. The "clerical collar" if there is such a thing is the black, purple, scarlet or white, in the case of the Pope piece, of fabric that goes around the neck, policemen etc, wear a colour that matches or contrasts with their uniform. The white linen thing was merely a hygenic thing to keep it clean. The French clergy, being less fastidious tended to wear collars with tabs the same colour as their cassocks until quite late. The German's have only started wearing them recently, most wore an ordinary white shirt with the collar covering the cassock collar, rather like the Fathers of the English

Oratories, who not being altered at all by modern fashions hold onto the older Roman tradition.

It is for this reason that the Vatican has no problems with the efficient nine and ten year old boys who serve Mass early in the morning at St Peter's wearing them. I might put my servers in them.

Clerical dress is the cassock, but then that is really a university gown, again the Vatican seems happy to put anyone in one so even that is not solely clerical dress. I was amused to read that a new document on music by the American Bishops keeps say that the choir or the cantor shouldn't wear a cassock because it is "clerical dress", it advocates an alb which of course until thirty years ago was always regarded as the dress of "sacred minsters"that is sub-deacons and above, except of course in France but..........

Sentamu has quite a history of not getting on with African dicatators. I wonder if his attitude to Idi Amin was more robust than this. As for Mugabe, he must be shaking in his shoes now, for fear that Sentamu might, as a next step, undo his top button.

I agree, what servers wear needs more attention. Servers always tend to look a bit scruffy round the collar if the cassock has the stand-up style, whatever is worn underneath. And jeans, if worn, should not be visible, nor trainers either. Servers who normally go around in trainers should keep a spare pair of black shoes in the sacristy just to wear on the sanctuary, they need not be heavier than those lightweight shoes people wear to drive their cars.

I don't think Mugabe will be quaking in his shoes at what the Anglican Archbishop of York is wearing, or not wearing. And who will replace him anyway and what guarantee is there he will be any better? Look how Russia has reverted to the Tsarist style. Every country seems to run to type.

"I think this particular prelate is still bear headed. If he decided to go bearfooted, or to wear a hairshirt it might be more of sign."

Fr. Ray, I hesitate to say anything, for fear you'll change it and thus deprive others of a little smile -- but I gotta know: Polar, or California Brown? The more vivid the mental image the better. :-D

Indeed such a "protest" by Sentamu is ridiculous.
When there still was an English College in Lisbon there was a College tradition of wearing a white linen strip which was folded around the cassock collar and pinned on each side at the front by two pins pushed down through the linen into the collar. There also was an outer sleeveless garment which was for walking outside of the College and it had a red collarette with the ends hanging down at the back. The end behind one's left shoulder was pointed. The end behind one's right shoulder was widened out in a triangular fashion.
(I know, I'm just reminiscing!)

Ah i'd love to see my sons in collars!

The question of cassock/academic gown is a a bit of a chicken and egg one because in the Middle Ages undergraduates at Universities tended to be seminarians. Thus the Vestis Talaris which is the robe proper to a cleric formed the basis of what evolved into the academic gown. As to the issue of servers and choristers wearing them, since the cassock is properly the dress of a cleric, the privilege of laymen and boys being allowed to wear the cassock and surplice for serving was always considered just that- a privilege extended to laymen where there was a shortage of tonsured clerics to assist in the liturgy. It would appear a nonsense to allow women and girls to wear the cassock precisely because it is the dress of a male cleric. The post conciliar theology surrounding the alb seems to be all to do with the alb as the baptismal garment symbolising how we all share in the priesthood of Christ and this seemed to be the justification for allowing girls to wear the alb (or the vulgar KKK style hooded robe which is seen in most parishes in England).

The Oratories in England always maintained the tradition of the servers wearing the Oratorian collar on their casscoks and the London Oratory had bespoke gowns made for their mixed choir which are neither cassocks nor albs. This would seem to me to be a sensible solution to the issue; cassocks (with or without collars) and surplices for the servers (who according to Canon Law and in keeping with ancient custom should be male unless there is a drastic shortage), and gowns for mixed scholas.

Perhaps Pope Benedict could cut up some of the Ghastly Vestments that he was forced to wear by Archbishop Marini!

On the subject of clerical 'dress', I have been watching some of the TV talks given by US Bishop Fulton Sheen now on YouTube.

He wore the full Bishop's robes including his skull cap (but not mitre!) and a remarkable scarlet floor-length cape which he used for dramatic effect swirling it round like bat-man ! He was a unique 'showman' in this way and I understand his programmes were extremely popular in the US.

Bishop Sheem's humour was well known - when he won an Emmy award he commented that he had to pay tribute to his four writers Matthew, Mark, Luke and John!

His cause for canonization was opened in 2002 and it is humbling to watch this great man in action on TV who may one day be a Saint.

What has it got to do with anybody from the Church of England.They have been trying to bump us all off for 400 years