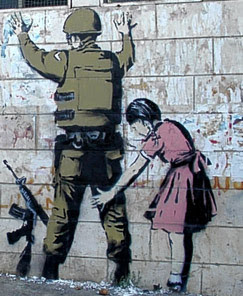 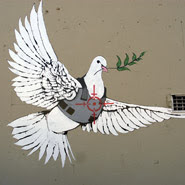 Graffiti artist Banksy has taken his craft to the holy city of Bethlehem in Israel in a move that is hoped to revive the region's ailing tourism industry.

The latest creations from the British-born artist have been timed to coincide with the opening of an exhibition of work by Banksy and other artists.

Six ironic images have been stencilled on the controversial security wall surrounding Bethlehem, including a dove in a bullet-proof jacket and a soldier being searched by a young girl.

This is not the first time that Banksy has decorated the 436-mile wall in the West Bank - in 2005 he painted nine images of his take on life beyond the wall.

While he keeps his identity hidden, the artist spoke about the location of his latest work, saying that more people should visit Bethlehem to see the city for themselves.

Well, Banksie, "sissy artists" also tend to be "sissy leftists" and terrorists recognize an ally when they see one, of course YOU would be "safe."

Gemoftheocean,
Rather than listen to, and proting, far right, American propaganda, try listning to the Pope and Patriarch Miochael Sabbah. Banksy for all his "sissy leftist[s]" tendecies seems to be doing that and drawing attention to the plight of Bethlehem, which until recently, the building of the wall, was a Palestinian Christian city.

Nick, I can fully appreciate that once Bethlehem didn't have to worry about terrorists taking over places, like, oh, say, the Church of the Nativity. You may have missed the news item, re: this most sacred place being desecrated by Islamic fundamentalist terrorists a few years back.

It would appear that Christianity should be GRATEFUL to the Israelis, for ensuring that this holy place was not leveled and replaced with a mosque. Really, the Pope is a dear and holy man, but having gone through the Nazi years himself, I would have thought that he'd have learned at some point that you just might have to use a little muscle now and then to dislodge evil forces. The combined forces of the UK, Russians, and US and other allies had at least a weensie bit to do with removing Nazism and their attendant evils from a position of power. I can pray the big bad wolf curls up and dies, but how many have to be eaten in the process whilst waiting for that blessed event? Surprisingly, if you swat the big bad wolf over the head, he tends not to be able to eat more children. These radical Muslims are NOT conducive to building a shining city on a hill.

Perhaps if radical Muslims stopped putting on bomb vests and detonating themselves on buses carrying schoolchildren and people just trying to get their shopping done it might be a start? Just a thought.

Maybe if the so-called "moderate Arabs" controlled the radicals amongst their brethren we might all be spared? But no, sadly too many Muslims are afraid of the terrorists themselves to speak out. The Israelis lose EVERYTHING should they fail in their mission to thwart those who would destroy them. They don't have to be "politically correct" - they are trying to survive, in a world where millions of Arabs, much less radical Muslims would has soon finish the task of putting them all in the ovens.

If I'm "proting" [?] "far right American propaganda," what pray tell are you "proting?" [Did you mean promoting?] The radical Muslim agenda? Or the mushy Euro-left agenda? The one where the smart dinner set types don't particularly like the go-getter Jews as "pushy?"

It is my general impression that for far too many Europeans anti-Semitism hasn't entirely gone the way of the Nazi.

It is the pope's job to wish and pray that everyone would lay down arms and join hands and sing Kumbaya and make nice-nice - but things rarely, given human nature, work that way.

For all the Euro-rants re: "The violent Americans" it seems to me that it is Europe which has in the last 110 years or so permitted the genocide of the Turks on the Armenians, Bolshevism was allowed to mass starve the Ukrainians, and kill off the kulaks. Nazis forced millions to do their bidding. Europe had a chance in the mid 30s - but didn't do diddly about Hitler when he re-militarized the Ruhr. France assumed the Maginot line would be enough and the Hun wouldn't slice through Belgium et al like a hot knife through butter. Really, it's like being "Shocked, shocked - that gambling is going on in the casino." Hitler banked on the France, Britain, et al not lifting a finger when the Nazis re-militarized in defiance of the Versailles treaty. He admitted that if the French et al had put up a fight, they'd have been quashed right there. He correctly assessed that they'd do nothing. It's human nature. Some people never learn "pay me now, or pay me MUCH more later." How many millions wouldn't have died? Maybe the pope himself would have been spared putting on the German uniform.

Many of you Euros want the Israelis out and the Palestinians (and by definition their Muslim radicals) in -- then you'll get a mess. Has everyone visited the Holy places who wants to? Better do so now before it's all gone, which it will be if your desires are realized. Will the last Christian in the Holy Land please take the Blessed Sacrament, empty the Holy Water stoup and extinguish the sanctuary lamp? It seems that if the Israeli hating Euros want the radical Muslims to win -- and don't kid yourself, that's whose in charge of the so-called "Palastinians" there now - then, please, please don't be surprised when ALL of the Holy Land looks like the Haggia Sophia and there are no Christian places of worship anywhere over there. The ISRAELIS are the ones safeguarding what's left. And if it would be nice if you'd stop treating him like Shylock.

gemoftheocean, what a shining example of christian compassion you are! personally, i think peace in the middle east is a worthy aim. its the extremists on both sides, including the 'christian' right-wing zionists, who do all they can to keep this mutual hatred alive. i would guess that its precisely because of the holy father's life experiences that he, and thank God the rest of most of the Catholic Church, see the value of compassion and peace and do not live in that little hollywood fantasy big bad wolf world of the shining light of zionism against the evil arabs world that you and your countrymen love so much.

If. Thank you for proving my point re: the Nancy Mitford crowd. The cry of "Juden raus" has never completely faded in the last 62 years, has it? Well, I'm sorry, but the Israelis seem to have a little more backbone against those who would annihilate them. Please forgive them if they refuse to jump in the ovens quick enough for you. They're "only Jews." It's not like they can be expected to follow anti-semitic European social niceties. I'm idealistic enough to still be shocked at ingratitude. We in America, other than college leftists, have a habit of thanking the Jews for saving what little of the Holy Land is left to us. Put it down to our unsophisticated Yankee ways. Short memories some of you have. I gather that before the bodies from the concentration camps were buried, many of the German civilian populace was forced to walk by the piles of bodies, so they couldn't later lie and say the allies "made it up." Perhaps not enough people were made to walk by, and perhaps it was unwise to only make the Germans do so. The panty twisters over there couldn't even stop the genocide in Bosnia. Too hard to put down the whine and brie without uncle Sam's help? How long are the riots in France going to last this go around? Car insurance premiums must be through the roof over there. Are the radical Muslims in the insurance business? Nothing keeps on giving like a vertical market.

There's no honor in being the last devoured. Wake up. The Islamofascist threat is real. The "turn a blind eye" strategy in the 30s didn't work then. It won't work now. Pray all you want. Hope the Muslims do too. But only a fool would count on it.

gemoftheocean,
the idea that those who want peace in the middle east are encouraging jews to 'jump in the oven' is tired, dispicable, sickening and ultimately self-defeating ploy which has been used by the less educated for years. i don't know if you actually believe your vitrioloc rant or your trying to provoke a reaction. its not a reaction you will get from me, and i've not much to say to someone who doesn't even regard peace as a worth objective but regards it as a sign of weakness or support for the genocide of the jews. i realise you are more interested in 'your country right or wrong' than anything happening in the real world.

Uh, "If?" Did I say I didn't want peace? The Israelis, the good Palestinians, the Pope, then Entire UN, Jane Fonda, and the stupid liberals who light themselves on fire, and almost the entirety of planet earth could hope and pray for peace for all mankind and all that good stuff. The reality BITES when some fanatic straps a bomb vest on and goes shopping. Or didn't you learn enough from that idiot Chamberlain waving a piece of paper in the air thinking he had peace? Right now the Muslim fanatics are pulling the strings over there. The Israelis have to do with reality NOW.