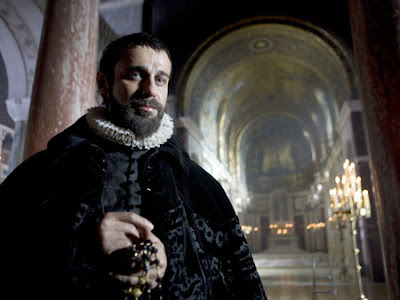 It's not that often a train of thought unites Nicole Kidman and Peter Viereck, the American maverick conservative. But I had been to a screening of The Golden Compass, the film that Kidman effortlessly illumines, and I was thinking about the villain of the piece, which wasn't anyone at all so much as an institution called the Magisterium. In the Philip Pullman novel on which the film is based, the other word for the Magisterium is the Church. Or, as the author explains, "Ever since Pope John Calvin had moved the seat of the papacy to Geneva and set up the Consistorial Court of Discipline, the Church's power over every aspect of life had been absolute. The papacy itself had been abolished after Calvin's death, and a tangle of courts, colleges and councils, collectively known as the Magisterium, had grown up in its place."

The clerics of the Magisterium are characteri sed by authoritarianism, hatred of sexuality, a penchant for heresy-hunting and black vestments, and an animus towards intellectual inquiry. Or as Eva Green, in the role of the witch Serafina Pekkala, hisses, they're out to get "Free Will".

This is, in other words, the pocket image of the Catholic Church carried by many British liberals - except that, for Rome, read Geneva. Which brings us to Peter Viereck and his remark that "anti-Catholicism is the anti-Semitism of the intellectual". Every group needs its bogeymen to reinforce a collective identity and, for British liberalism, that function is usefully fulfilled by the Church.
As it happens, I rather enjoyed the rollicking pace and the scary bearfights of The Golden Compass, and I devoured the books. But the mental furniture that occupies the novels and the film - the creepy cleric who doesn't baulk at poison, the glowering institution that opposes free intellectual inquiry (and, oddly, is situated in the Royal Naval College) - why, it comes from a familiar part of the English nursery, the bogey of anti-popery.

Actually, to get some idea of the suppositions on which this kind of anti-Catholicism is based you need only return to the cinema to see Elizabeth. That, too, is redeemed by a luminous actress, Cate Blanchett, but it is a remarkable summary of the old Protestant clichés about Catholicism as the other, the enemy.
at December 07, 2007

I don't mind people whether protestant or liberal "elite", socialist, nazi, communist, Jewish, islamic mormon etc identifying Catholicism as "the other" It is an essential first step of recognition, because we are in fact "the other". What I do mind is the lies. What I do mind is the intellectual laziness and disregard for rational argument and inquiry that hinders the search for truth and poisons the well for future generations. What I do mind is the mindless hatred directed at Catholicism. Although, I suppose it is only to be expected, given what we are. I suppose you can only be pro-Christ or anti-Christ, there is no neutral territory.

Melanie MacDonagh makes a fair point, but a thought struck me today that it may be that just as the SciFi and western movies of the 1950s were actually allegories of the Cold War, it may be that these are actually coded messages about the 'Clash of Civilisations'.

Don't you think the baddies in 'Elizabeth' and 'The Golden Compass' bear more than a passing resemblance to certain totalitarian ideologies currently plotting the destruction of the West through limitations on free speech (especially self-censorship)and self-immolation on public transport? Of course, in the current PC climate, these baddies are unnameable....

The devil's work as ever..only he shoots himself in the foot & looks plain ridiculous..

'I suppose you can only be pro-Christ or anti-Christ, there is no neutral territory'.

Interesting point benfan, although sadly I think that the majority of 'catholics' sit comfortably in what you call 'neutral territory'.

They are ignorant of the Faith through poor formation and/or laziness and simply don't know the truths of our Faith - which is why The Golden Compost, Elizabeth, DaVinci Code etc... get away with so much junk history, lies and plain garbage.

It may also be in large part that many catholics DO NOT WANT to know the Truths of Our Faith - because the challenge which Our Lord places in front of us daily is to get out of our lukewarm comfort zones, pick up our crosses and follow Him.

The 'ignorance is bliss' way of life is all too prevalent.