Appeal of the Pope for those kidnapped throughout the world, including Catholic priests 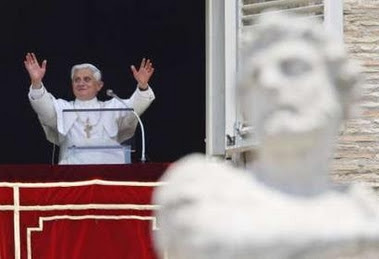 The Pope recalled in particular some priests kidnapped in Columbia. On the feast of Corpus Christi he underlined the value of Eucharistic adoration, which should be proposed especially to young people, in a world that is too “noisy and distracted.”

Vatican City (AsiaNews) – News of the kidnapping of Fr. Giancarlo Bossi, PIME, which took place this morning in the south of the Philippines, has been spreading in Italy and in the world. Precisely at this moment the Pope, in his Angelus address, launched an appeal on behalf of the numerous “persons, among whom are also Catholic priests, who are held hostage for various reasons in different parts of the world.” Benedict XVI added: “I carry all of them in my heart, and I keep all of them in my prayers,” referring in particular to some distressing cases in Columbia. The Pope went on to say: “I appeal with sorrow to the agents of these deplorable acts, hoping that they will become aware of the evil they have done and be willing to restore to the embraces of their loved ones those that they are holding prisoners. I entrust the victims to the maternal protection of the Blessed Virgin Mary, Mother of all men.”

Prior to this appeal the Pope had talked about Corpus Christi, today’s feast. “Today’s solemnity of Corpus Christi,” Benedict XVI said, “which was celebrated last Thursday in the Vatican and in other countries, invites us to contemplate the supreme Mystery of our faith: the Most Holy Eucharist, the Real Presence of our Lord Jesus Christ in the Sacrament of the altar. Every time that the priest renews the Eucharistic Sacrifice, in the prayer of consecration he repeats: ‘This is my body…this is my blood.’ He lends his voice, his hands, and his heart to Christ, who wanted to remain with us in order to be the beating heart of the Church. But even after the Celebration of the Divine Mysteries the Lord Jesus remains present in the tabernacle. For this reason praise is rendered to Him especially through Eucharistic Adoration, as I sought to remind everyone in the recent Apostolic Exhortation Sacramentum caritatis (see nos. 66-69) following the Synod on this topic. In fact, there is an intrinsic connection between celebration and adoration. The Holy Mass is in itself already the greatest act of adoration on the part of the Church. ‘No one eats this flesh,’ St. Augustine wrote, ‘unless he has first adored it’ (Com. on Psalms 98,9; CCL XXXIX, 1385). Adoration apart from the Holy Mass prolongs and intensifies what has taken place in the liturgical celebration, and makes it possible to receive Christ in a real and profound way.” The Pope underlined the importance of Eucharistic Adoration, above all as a witness to the Real Presence of Jesus, but also as a rediscovery and strengthening of a personal relationship with the Lord.

The Pope then went on to add: “I would like to take the opportunity that today’s solemnity offers me to strongly urge Pastors and all the faithful to practice Eucharistic Adoration. I would like to express my appreciation for the Institutes of Consecrated Life, as well as the confraternities and associations, who dedicate themselves to Eucharist Adoration in a special way: they are a reminder for everyone of the centrality of Christ in our life as individuals and as Church. It gives me joy to recognize that young people are discovering the beauty of Adoration, whether personally or as a community. I invite priests to encourage youth groups along this line, while taking care to guide them so that the forms of Adoration by the community are appropriate and dignified, with sufficient time for silence and for listening to the Word of God. In today’s world, so often noisy and distracted, it is more important than ever to recover the capacity for interior silence and recollection: Eucharistic Adoration permits us to do so not only in relation to the ‘I’ but also in company with that ‘You’ full of love who is Jesus Christ, ‘God with us.’”
at June 10, 2007