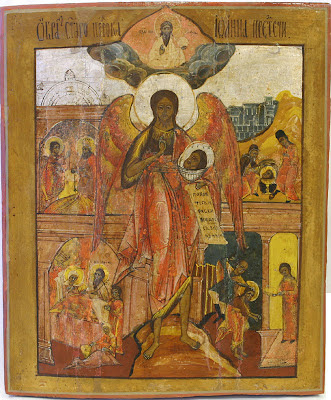 Today, 24 June, the liturgy invites us to celebrate the solemnity of the Birth of St John the Baptist, whose life was wholly oriented toward Christ, like that of his mother, Mary. John the Baptist was the precursor, the “voice” sent to announce the incarnate Word. In reality, then, to commemorate his birth means to celebrate Christ, the fulfillment of the promises of all the prophets, among whom the Baptist was the greatest, called to “prepare the way” leading to the Messiah (cf Mt 11:9-10).

All the Evangelists begin the narrative of Jesus’ public life with the story of his baptism in the Jordan at the hand of John. St Luke places the Baptist’s entrance onto the scene within a solemn historical frame. My book Jesus of Nazareth also treats the baptism of Jesus in the Jordan as an event that would have enormous resonance for his times. From Jerusalem and from every part of Judea the people came to listen to John the Baptist and were baptized by him in the river as they confessed their sins (cf Mk 1:5). The repute of the prophet-baptizer would grow to the point that many asked themselves if it was he who was the Messiah. But – as the evangelist underscores – this he quickly denied: “I am not the Christ” (Jn 1:20). He remains, however, the first “witness” of Jesus, having received the indication of heaven: “The man on whom you will see the Spirit descend and remain is the one who will baptize in the Holy Spirit” (Jn 1:33). This happens precisely when Jesus, having received his baptism, rose from the water: John sees descending upon him the Spirit as a dove. It was then that he “understood” the full reality of Jesus of Nazareth and began to make him “known to Israel” (Jn 1:31), pointing to him as Son of God and redeemer of man: “Behold the Lamb of God who takes away the sin of the world” (Jn 1:29).

By authentic prophecy, John remained a witness to the truth without compromise. He denounced the transgression of the commandments of God, even when the powerful were its protagonists. And so, when Herod and Herodiade [Salome] accused him of adultery, he paid with his life, signing with martyrdom his service to Christ, who is the Truth personified. Let us invoke his intercession, together with that of Mary Most Holy, that in our own times, too, the church may know to keep itself faithful to Christ and to witness with courage his truth and his love for all.