English, Welsh bishops say chimeras should be given human status 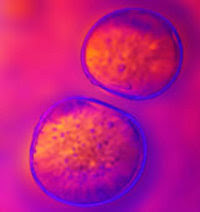 By Simon Caldwell
Catholic News Service- Human embryos injected with animal cells, or chimeras, should be accorded human status under proposals to be considered by the British Parliament in the fall, said the Catholic bishops of England and Wales.

They also said politicians should reconsider a proposed ban on the implantation of chimeras into women.

"In particular, it should not be a crime to transfer them, or other human embryos, to the body of the woman providing the ovum, in cases where a human ovum has been used to create them," the bishops said.

"Such a woman is the genetic mother, or partial mother, of the embryo; should she have a change of heart and wish to carry her child to term, she should not be prevented from doing so," they added.

The bishops' June 20 submission to a parliamentary committee set up to scrutinize the draft Human Tissue and Embryo Bill was prepared by a committee overseen by Archbishop Peter Smith of Cardiff, Wales, chairman of the English and Welsh bishops' Department for Christian Responsibility and Citizenship.

At present it is illegal in Britain to create embryos using a mix of human and animal genetic material, but the government is proposing to allow scientists, for the first time, to create human-animal embryos for research as long as they are destroyed within two weeks.

In their submission, the bishops said that most of the procedures covered by the bill "should not be licensed under any circumstances," principally on the grounds that they violate human rights.

However, they said, "at very least, embryos with a preponderance of human genes should be assumed to be embryonic human beings and should be treated accordingly," they said.

The bill has been designed as an overhaul of the laws on fertility treatment and would include sections on in vitro fertilization and embryonic research. Britain's 40-year-old abortion laws also would be open to amendment under the terms of the bill.

The government initially proposed to ban the creation of chimeras but changed its mind earlier this year under pressure from the scientific community.

Under the terms of the bill scientists would be allowed to create three different types of human-animal embryos.

The first type -- the chimeric embryo -- is made by injecting cells from an animal into a human embryo.

The second, the human transgenic embryo, involves injecting animal DNA into a human embryo and the third -- a cytoplasmic hybrid -- is created by transferring the nuclei of human cells, such as skin cells, into animal eggs from which almost all the genetic material has been removed.

The bill does not allow the creation of "true hybrids" by fusing the egg and sperm of humans and animals and stipulates that human-animal embryos must be destroyed after two weeks.

The bill would also extend the statutory storage period for embryos from five to 10 years. It would allow the screening of embryos for genetic or chromosomal abnormalities that might lead to serious medical conditions or disabilities or miscarriages.

It also would allow doctors to check whether an embryo could provide a suitable tissue match for a sibling suffering from a life-threatening illness.

Under provisions of the bill, fertility clinics would no longer be able to deny treatment to lesbians and single mothers. In certain circumstances, a gay male couple would be able to apply for a parental order in surrogacy cases.

Such provisions were opposed by the bishops in their submission. They said they found offensive the practice of creating an embryo especially to cannibalize its tissues and said that "deliberately to sanction the conception of children who will be deprived of both a genetic and social father is to place the wishes of adults above the human rights of the child."
at June 26, 2007

They should not be creating these things in the first place. No good will come of it.

They always try to justify this kind of thing by saying it will cure terrible diseases.

At the time of the Terry Schiavo case in Florida, I had a conversation with my local Auxiliary Bishop, and remember saying to him, "Your Excellency, not that they have established legal precedents for artificially curtailing the boundaries of human existance at BOTH ends of the life-cycle, the way is clear to manipulate the population base legally based on any number of criteria. For example, 'Oh, these seniors are costing us way too much money to preserve, and are damaging the economy...guess we'll have to kill everyone over 80; or the retarded; or...' As a Catholic Bishop you'll be on the front-line of defending human existance in the face of damaging a transient economic good (for instance), and I don't envy you."

"John," he said, "I realized in the early 1990's, that in the not very distant future, the greater and more difficult argument will be not about the parameters of human life, but as to the correct definition of exactly what it MEANS to be human at all."

The sad silence following his rejoinder to my hypothesis seemed interminable. What is devastating is to see it coming true before our very eyes. Soon, if not already, the Nazi's will have nothing on our age of murderous experimentation.

This is one major reason why, even if it proves a vain hope, the redioscovery of the sense of the sacred through it's primary means of communication, the tradional rite of mass, is being made a priority. At this point only the fullness of non-relativist Roman Catholic theology can prevent complete moral chaos, and the mass sums up in a few actions what many words are too dry to convey.

I write these thoughts having just read the forthcoming editorial from Moynahan of "Inside the Vatican" on Sean Tribe's New Liturgical Movements site. We are approaching a moment. Much will depend on how well certain decisions are backed up now. Pray for the Holy Father.

herbdomadary,
It is easier to put in your correction, rather than me cutting a pasting.

Don’t you think that the Holy Father ought to issue a major encyclical, in the “Humanae Vitae” mould, to address the whole issue of the genetic manipulation of human life and to state exactly what the teaching of the Catholic Church is? This, surely, is the major reproductive-ethics novelty of our time and we need the Pope to lay out some clear moral boundaries.

This whole issue can’t just be left to the bishops’ conferences – otherwise we run the risk of getting different guidelines from different national hierarchies. And I don’t think that delegating the production of such a document to the Congregation of the Doctrine of the Faith would be as effective in terms of capturing the world’s (and the Catholic Church’s) attention.

Of course, there would be a huge outcry (just as there was in 1968), and the Pope would face a barrage of criticism from those arguing that he is standing in the way of progress as these techniques are therapeutic and aimed at improving the human condition. But the ends don’t justify the means, and “playing God” in this way is an incredibly serious moral issue.