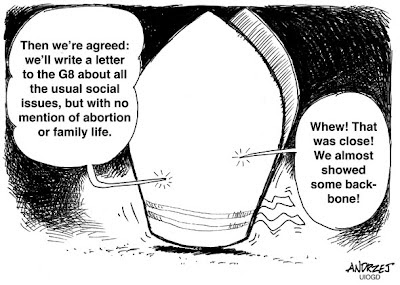 United Kingdom, June 7, 2007 (LifeSiteNews.com) - The British Medical Association is pushing for abortion on demand and permission for nurses and midwives to carry out abortions, in a briefing paper issued by the BMA ethics committee June 5.

The paper supports changes to the Abortion Act that would allow women less than three months pregnant to go directly to an abortion clinic without obtaining approval from two doctors, as is currently required. Under the proposed changes women in the first trimester of pregnancy would not have to meet any medical criteria for abortion—as the law stands now, women who want an abortion must indicate that continuing with the pregnancy would harm their physical or mental health.

The committee also recommended that experienced nurses and midwives should be allowed to perform both medical and surgical abortions with suitable training. Furthermore, the committee stated it would support allowing first trimester abortions in premises that had not received prior approval, so long as safety was ensured.

“The medical ethics committee considers that access to first-trimester abortions should be available on an informed-consent basis as with other medical procedures. Removing the current conditions will remove the legislative and administrative burdens created by the act that, in reality, do not stop women seeking abortion, but potentially expose women to delays, and consequently more costly and higher-risk procedures,” the paper stated.

While the Catholic Church officially opposes the changes, Peter Kearney, a spokesman for the Scottish Catholic Church, said the “abysmal” failure of the medical profession to uphold current legislation restricting abortion has already resulted in abortion on demand.

“The changes they are proposing would probably make little difference in reality since we do have de facto abortion on demand in this country,” Kearney told the Scotsman.

“The medical profession have failed quite abysmally to uphold the current legislation. Our view remains very clear on this, and that is that abortion is morally wrong and is not the answer to unwanted pregnancies.”

The issue will be debated at the BMA’s conference later this month, to evaluate the level of support among doctors across the UK.

British doctors are increasingly opting out of performing abortions, according to a release this spring by the Royal College of Obstetricians and Gynaecologists (RCOG).

“Unprecedented numbers” of doctors are refusing to perform abortions for ethical and religious reasons, the release said, warning of a serious shortage of abortion services if the trend continues. Recent statistics have shown Britain’s abortion levels to be at an all time high, with one in three British women having an abortion in her lifetime. More than six and a half million babies have died from abortion since it was legalized in the country 40 years ago.

Despite the growing alarm over the shortage of abortionists, the RCOG said its view was that the current abortion law met needs, according to the Scotsman report.

And even worse from Rome. Benedict XVI's statement to the G-8 (see Zenit for the full text) has the same flaw. Well, you can't say the national episcopal conferences are not supporting the example being set by the Pope. We must seriously wonder if the Pope's commitment to the pro-life cause is an iota better than any of these bishops

i couldn't face it!

Methinks we bang on too much about abortion at the expense of other social and economic issues which are also hostile to family life, and which should equally be of concern to us. We need to take a balanced approach, in which we state our concern for the human individual from conception to the moment of death. If we do not do this we will be (a) ignored and (b) failing to present the teaching of the church in its fullness.

Of course when abortion is up for discussion we should state our position firmly but I don't see the G8 conference was the right occasion.

If carbon emissions result in climate change and rising sea levels, the consequential chaos will not be family-friendly. And since we are charged with the task of being good stewards, this is what we should be saying on this occasion.

Actually, what the Bishops should have been pointing to at the G8 conference was the more general body of Catholic Social Teaching which is entirely relevant to the issue of poverty everywhere. The Catholic Church is the only significant organisation on the planet with anything useful to say on the subject.

I have suspicion that the pro-abortion lobby is weak at the moment and this push by the BMA is a sign of its weakness. Our Bishops are simply too scared and intellectually lazy to take up them on however. Or even forge some alliance with evangelical, Jewish and Muslim groups who might be sympathetic.

Henry - abortion is direct killing of the innocent.

"If" (your qualification) climate change causes rising sea levels etc to be un-family friendly, that is not an issue which directly kills the innocent.

One is murder, the other isn't. Therein lies the difference and why we should continue to "bang on" about abortion more than other non-family-friendly issues.

We must not go down the road of the Barmy American Gellicals,they are not even Christians.The proper way is through education not ranting & threatening.The problem is that the teachers have to have GUTS & something that is quite Rare amongst teachers today is Common Sense.

It is easy to pour poison down your drain and ignore the consequences of your action, which is still wrong.

Besides which if we turn ourselves into a single-issue campaigning body, people will stop listening.

A further issue is that abortion is an action that occurs in particular contexts, which are sinful structures.

We're not a single-issue Church, Henry. There are ten commandments, not just one. But abortion happens to be the elephant in the room. The others are, by comparison, but a menagerie of aardvarks, tapirs and racoons.