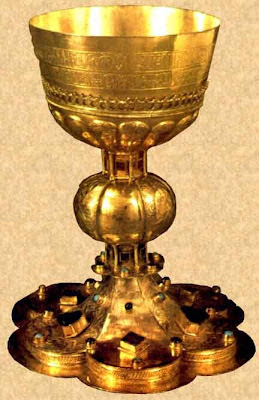 The Vatican issued a document on Itinerants yesterday, in one brief section that hit the wires there was a reference to not drinking and driving.
Yesterday at our blogger's lunch we speculated idly about where government legislation might lead us. In ten years time will we will still have Catholic schools or charitable status, we wondered.
Of more pressing interest or concern was the proposed government regulations concerning the reduction of the amount one can drink have when driving to zero. I haven't kept up with this but the new laws will apparently make it illegal to supply alcoholic beverages to anyone one knows they will be driving.
Thus, if Mrs Jones on her way home from Mass has an accident and she is found to have even less than one unit of alcohol the provider, the celebrant of the Mass could be liable, and presumably her insurance company would not pay out.
Most probably this would not apply to Mrs Jones, but Father Jones who has several Mass centres might well be in a very serious situation.
at June 20, 2007

Well now Padre,
We are in serious trouble here. Think of all the obedient pastors who purify the sacred vessels!

Oh but fear not, transsubstantiation will save us. It would be great to pull out all our relics and investigations in a court of law.
see http://my.homewithgod.com/gertrude/eucharist/
Who knows we might even pick up a few converts on the back of it all.

Is it not possible to get non-alcoholic wine?

Don't just lie belly up for the control freaks. Can't there be an exception written into the law to cover communion wine? the amount consumed by any one person is so tiny that no sane person would think you could get drunk on it.

Even US State laws, and rigid as they are regards no sales of alcohol to anyone under 21 makes provisions in the law for youngsters to receive the communion wine without government hassle.

These "zero tolerance" policies on any number of issues are just the abrogation of responsibility to use a brain. Who's in charge over there?

I worked at a police department where I took part in a breathalyzer training class.
I was one of the lucky "test subjects" who drank while the cops learned and then tested me.
There is no. way. a taste of the Precious Blood could ever register on a field test, nor could it be used in a court of law to prove 'drunkenness' any more than a shot of Nyquil in your system.
No fear.