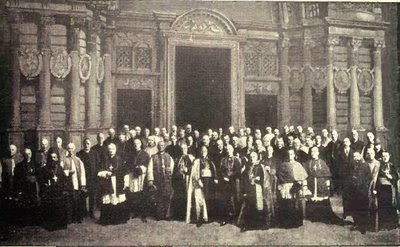 Saturno tip to the Muniment Room
Next year marks the centenary of a Eucharistic procession which was banned and which led to the resignations of two Cabinet ministers in the United Kngdom.

The occasion was the International Eucharistic Congress which was held in London from 9th to 13th September 1908 at the invitation of the Archbishop of Westminster, Archbishop Bourne.

It was the first Engllish speaking International Congress of the Eucharist in an English speaking country. More importantly, it was the first time that a legate of the Pope (Cardinal Vincent Vannutelli) had been in England since the Reformation. At that time, London was the centre of a huge Empire and the holding of such an event in such a location was obviously important.

At the time it was regarded as the greatest religious triumph of its generation. More than three hundred and fifty years had elapsed since a legate from the pope had been seen in England. With him were six other cardinals, fourteen archbishops, seventy bishops and a host of priests. No such gathering of ecclesiastics had ever been seen outside of Rome in modern times, and English Catholics prepared to make it locally even more memorable ............
read more at Idle Speculations

Idle Speculations is a fascinating blog, I have just added a permanent link. Check it out, lots of interesting Corpus Christi stuff.

One of those present at the congress was Cardinal Mercier from Belgium.

In the 1930's, this same Cardinal participated in the "Malines conversations" which was an attempt to reconcile the Anglican Church with Rome. The dialogue was conducted primarily with Lord Halifax and by-passed Cardinal Bourne of Westminster (himself from a convert family of Anglicans).

What these "conversations" indicate is an astonishing ignorance on the part of continental Catholicism in respect of the progress of the Catholic Church throughout the Anglo-Saxon World including of course the UK and its Empire plus presumably, by extension, the progress of the Church in the United States of America. Even if ethnically Catholics throughout the Empire and in the United States were not always strictly speaking "anglo" but in the process of being assimilated. Mercier revealed further ignorance of the 'broad church' model as praticed within Anglicanism, believing that Anglo-Catholics like Lord Halifax for example, were typical Anglican Church members. (If anything, Bourne and his fellow Catholics were something of a mild irritation to Mercier who simply couldn't understand the concern of Bourne and his fellow English Catholic regards these "conversations").

It is my contention that similar attitudes to Mercier's prevailed at the Second Vatican council and it was the American bishops in particular, who bore the brunt of them.

For we are talking about men representing the most generous, wealthy and powerful nation on earth whose troops had liberated vast tracts of Western Europe; whose economy had revived the Western European economies via the Marshall plan and other initiatives; and who would continue to offer protection in the face of a hostile Soviet Empire right through to the fall of the Berlin Wall in 1989; these very bishops would find themselves dictated to by French, Dutch and German theologians.

The Malines conversations are interesting introduction to this dynamic for Cardinal Bourne found himself similarly insulted, compromised and humiliated less than 30 years before that by the actions of Mercier and his connections at the Vatican.