A Nice Quiet Day Off 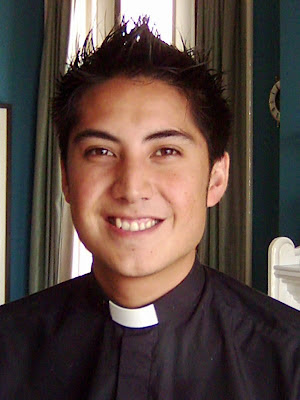 I finished of sorting out my holiday yesterday, I very rarely get a Sunday off, or as one of my parishioners said, "...we very rarely have a Sunday without you". When I was an assistant priest I always enjoyed the parish priest's holidays more than mine.

First of all I am going to Verona for a week, with friends for the Opera Festival, and then down to Rome for Aaron Spinnelli's ordination to the diaconate, that should be fun, a cohort of my favourite priests of the diocese will in Rome for the event all staying at the Domus Paulus, near the Piazza Novona.
I have known Aaron for years, he has always shown a remarkable maturity, I so was pleased when he was accepted by the diocese and began his studies in Rome, remember in him in your prayers in the month leading up to his ordination.

I always say Mass and hear confessions on weekdays and yesterday there was a little queue for confessions, but no-one went into the box, so I went outside to find out what was the matter, there were three people there who I thought were South Americans, one of the women was obviously blind. I asked what they wanted, "We want a shower", said the other woman. I thought I misunderstood, or this was a euphemism for the cleansing lather of the of the, "second baptism". But I discovered they spoke Spanish. Fortunately, Sr Joan, who had founded schools in Venuzuala and I should think had quelled a gang or two of drug dealers, and then started a day centre for the homeless in Brighton, was able to translate. In our multi-cultural society I have a number of people, who knowing the dire consequences of breaking the seal of confession, occasionally act as translators.
They did indeed want a shower, one of our parishioners took them down to the former church that is now a centre for the homeless.
They were Romanians, who had been living in Spain, for the last few days they had been living on the street. I presume they were professional beggars.
I spent a bit of the rest of the day looking for a lavatory brush, as one does as a priest, Robert Dyas had one only, for £15, rediculous, after much searching I found one, today, in a ironmongers for £1.45, such an item is like hen's teeth in Brighton.
I heard that at one of the Oratories a lavatory brush kept disappearing, an old priest there went on holiday, the superior decided his room needed a tidy. The lavatory brush was found in his bed. "I get an itch, Father, on my back, it is the only thing I can reach it with!" was the explanation.
(Sorry to be so mundane).
at June 12, 2007

In Denmark the trains have a brush in the lavatory. Obviously they don't get stolen by Oratorians with an itch.

Just rejected a comment, if you are going to be impertinent, or just unimpressed, do so on another blog.

Have a wonderful holiday Father - you deserve it. Hope you enjoy the opera. [Take a cushion if you are going to sit on those hard Roman seats at Verona!] I shall be remembering Aaron in my prayers as always - it's good to see him when he comes to Eastbourne.

£15, the cost of a loo brush, that is what I paid in Verona for an opera ticket

£15, I could go to the Opera five times for what it costs my husband to go to a game of football!

I hope that the superior bought the dear old priest a back scratcher.

Very amusing blog and aren't nuns great! I love the way that nuns rush in where others fear to tread!

I met Aaron when he was a first year seminarian, and I was about 16 years old. He was wearing a dog-collar, otherwise I probably would not have been able to recognise him. The impression he made on me really encoouraged me a lot to continue practicing the faith at that difficult age. He was a very good thing and I thank God for the opportunity to have met him, so it's truely wonderful to see him almost ordained!

Ah, indeed. We shall not see his like again!