Latin on the streets 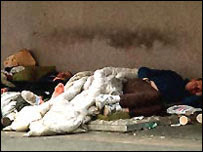 I was wandering along a side street off Western Road, the main shopping street here and a drunk man staggered up to me out of a doorway in which he had been lying. As a cynical priest I thought "another request for a quid!", but not at all, all he wanted was a blessing, I mumbled a prayer and gave him a blessing.
"Fr John, in London always does in in Latin, Father, can I have it in Latin, Father", he said.
"In nomine Patris ....", I said.
"Thank you, Father, it works better in Latin", he said and staggered off back to his bottle and sleeping bag.
at June 01, 2007

I know I should have used the form, "Benedictus es, Domine, Deus universi, quia de tua largitate accepimus... quem tibi offerimus, fructum viæ".
I couldn't think of a Latin form that expressed "rough sleeper", without the connotation of a difficult night tossing and turning, "amicum vini", seemed crass, but of course in todays Rite there should have been at least one, preferrably two, or better three, scripture readings. I didn't think Fr John did that.
You see, Moretben, the Council has indeed reached Brighton!

The Council reached Brighton, and Brighton's priest has realised that a blessing in the traditional manner can still be effective. God Bless the bloke, and God Bless you, Father. God Bless Fr John, too.

"I tell you solemnly, if the trads were silent,
even the very stoned would cry out".

One of our Fathers here at Santa Croce in Rome replies (in Roumanian) to those who ask him for money, "What will it be? Money or a blessing?" Invariably they ask for the blessing.

"I tell you solemnly, if the trads were silent,
even the very stoned would cry out".

The "I see the council hasn't reached...." thing is quite genuine, BTW. Ten years ago Madame Moretben and myself tied the knot in her grandparents' village in the south of France. The celebrating priest was a mutual friend, Father, of Southwark diocese. He celebrated the Nuptial Mass in the Old Rite (at our request), to the bewilderment of the PP and the indignation of two of my wife's elderly relatives, who accosted M. l'Abbe afterwards. "Well Father", they fumed, "I see the Council hasn't reached England yet!"