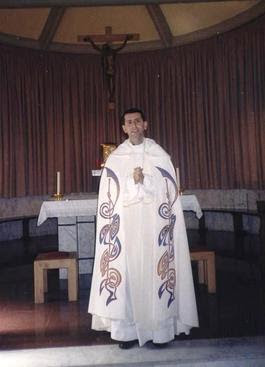 Picture from Don Marco, who says Fr Ganni lived at the Irish College while he studied in Rome.

Asia News
With “a heart full of bitterness and mourning”, the Chaldean Church is today lamenting its martyrs. This is how, in a joint statement the Chaldean Patriarch and his bishops remember Fr Ragheed Ganni and his three sub-deacons - Basman Yousef Daud, Wahid Hanna Isho, Gassan Isam Bidawed – murdered in cold blood yesterday, as they left the Parish Church of the Holy Spirit in Mosul after Sunday Mass. This afternoon at 1500 (local time) their funerals will be held in Karamles, Fr. Ragheed’s home town, celebrated by Msgr. Faraj Rahho, bishop of Mosul.

Emmanuel III Delly’s condemnation on behalf of the nation’s bishops came just hours after the assassination. “It is a most heinous crime that any person of proper conscience would reject. The authors carried out a most horrible act against God, against humanity, against their own brothers who were peace loving citizens, as well as men of religion who always offered their prayers to God the Almighty for security and stability in Iraq”, the text reads.
Msgr. Rabban al Qas, bishop of Amadiyah and Erbil, reflected on the figure of Fr. Ragheed with AsiaNews: “He had such great courage, united with a loving calm. He was a spiritual man, loved by his people, Catholic and Muslim”.
Meanwhile new information surrounding the nature of the attack has come to light. After celebrating Sunday mass, Fr Ragheed and his three aides were leaving the Parish by car, accompanied by the wife of one of the sub-deacons,, Gassan Isam Bidawed. In recent days the three insisted on accompanying Fr Ragheed to protect him. “They were young men alive with faith, who accompanied their parish priests every more, risking their lives for their belief in Christ”, their friends tell. Suddenly, at the corner of the road, their car is blocked by unknown armed men militants who order the woman to distance herself from the others and then, in cold blood, shoot the remaining passengers, repeatedly. The aggressor’s then booby trapped the car with explosives; with the aim of further carnage should anyone near the car to recover the bodies. In the immediate aftermath of the attack, the bodies remained, abandoned on the city street, because no one dared to approach. It was only towards ten pm (Local time) that security forces finally defused the explosives allowing corpses to be recovered. They now lie in repose in the Church of the Holy Spirit.
The Chaldean bishops who are currently gathered for their patriarchal Synod “ask the Lord to grant mercy to the souls of these martyrs, and extend their deepest sympathies to the families of the deceased, to the bishop of the city Msgr. Faraj Rahho, to the brother priests of the victims and the Chaldean faithful throughout the world, that they may be given the necessary strength to face such an arduous situation”. The bishops conclude by recalling the persecution of Iraqi Christians, their forced emigration, their being pushed to renounce their faith asking “Iraqi leaders and international organisations to intervene to put a concrete end to these criminal acts”.
Yesterday card. Tarcisio Bertone, Vatican secretary of state revealed that the war in Iraq will be on the agenda for talks with US President George Bush in his upcoming visit to Rome June 8th.
Fr. Ragheed is the first Catholic priest to have been killed in Iraq since 2003. Before him, last year it was the turn of a Syro- Orthodox priest Fr. Paul Iskandar.
A dear friend of AsiaNews, Fr Ragheed Ganni was born in Mosul in 1972. A graduate in engineering form the local university, he studied theology from 1996 to 2003 at the Pontifical Irish College and the Pontifical University of Thomas Aquinas the "Angelicum", where he received a licence in Ecumenical Theology.

Fr Ray,
thank you for this post. I remember Fr Ragheed from the Angelicum and without your blog doubt I would have heard this tragic news. May they rest in peace.
God Bless you,
Fr Simon Hall

What a tragic story.
RIP.

Thank you for posting this very sad news. I along with a number of Chaldeans have been trying to highlight the plight of all Christians in Iraq even before the Martyrdom of the “4 heroes” in Mosul last Sunday. I ask all of those who read this to pray for all persecuted people in the world and to remember not to take their faith or indeed not take going to Mass for granted because as someone who lived and worshiped in Chaldean and indeed Latin rite Churches in Iraq you never know when the day comes and evil people stop you from Receiving Jesus in the Sacrament of Holy Communion.

Please father Blake highlight the plight of Christians of Iraq whenever you can we are under severe assault. For example in certain parts of Baghdad we are either forced to convert to Islam, pay a an expensive form of tax, leave our homes, be murdered or even most recently have to give one of our daughters in marriage (forcibly if necessary) to a Muslim man in that area in order to save the rest of the family. All the while political leaders in Iraq and President Bush and Prime Minster Blair turn a blind eye.

I have nothing against Muslim people whatsoever indeed in the UK I have 2 great friends who are Muslim who would never ever hurt even a fly but sadly in the absence of law and order in Iraq some extremist having spent the last four years killing other Muslim people as well as anyone trying to build a new country are now turning their attention to Christians who unlike other groups in Iraq have no armed militias to protect them and as Christians we do not want that anyway we just want to live in peace!

a very nice prayer leaflet has been produced in remembrance of Fr. Ganni and his companion in six other languages including Chinese ( Mandarin)

I am in Ireland presently and it is amazing how many people knew or have met this wonderful priest ,Fr. Ganni.