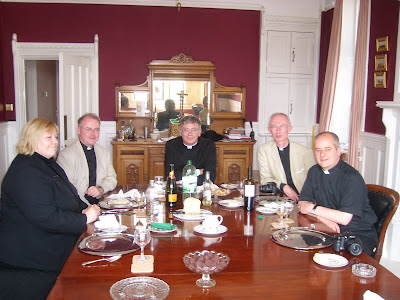 Mulier Fortis, Valle Adurni, Me, South Ashford Priest and Hermeneutic of Continuity, sat down to lunch today. Strange, when someone said, "I did...", we were able "Yes we know, you blogged about it".

Great picture! It's good to see you all. I read all your blogs sometimes and some of them every time and feel very supported and encouraged to know you are all there.
Amette

Fr Ray, thank you for a very enjoyable and entertaining lunch. I also really liked your church (though I'm not entirely sure about the installation - it's a bit modern for my tastes!)

I'd love to send you the photos I took, but don't seem to have your email...

But does anyone still wear a hat?
[Apologies to Elaine Stritch...)

Please do not stop blogging I look forward to more posts

You looked so pastoral, Father, on my blog! Wonderful to see a smiling priest. Thanks for yesterday. Looking forward to another.

What a wonderful picture, and dare I guess whose Roman Hat that is sittting in the background?

Sorry about that Fr. Ray....The way you phrased the title of that particular blog "Bloggers who lunch" immediately brought to my mind the signature song of Elaine Stritch called "Ladies Who Lunch" from the Stephen Sondheim musical COMPANY. It's more or less an anthem for what life is like for those rich women who were (and still are) expected to organize all the charity events in town and keep au courant, and keep the social machinery of Manhattan (an by extension other cities) running. They organize and put on the hospital fundraisers, the fresh air camp funds, etc. ad infinitum...while hubby makes his pile on Wall Street, the Media, etc.

The ladies' days are filled socializing and trying to keep themselves up to snuff intellectually and physically, so they can be trophy wives...and make all the charity work look "easy" when the reality is they are often tired of doing the same things and with the same people. But it isn't "done" to say so.

The song is particularly urbane, it manages to be in turn cynical, witty, and in the end uplifting.
It's quite a tour de force by one of THE grand dames of American Musical theatre.

The song starts off about 1/4 tempo and gradually picks up speed verse by verse hurling the audience forward with the character.

The particular line "Does anyone still wear a hat" sets up the song, coming just after the following patter:
"I'd like to propose a toast-

Here's to the ladies who lunch
....Everybody Laugh-

Lounging in their caftans and
planning a brunch ...On their own behalf.

Off to the gym, then to a fitting
...Claiming they're fat

And looking grim, 'cause they've been sitting...choosing a hat...
Does anyone Still Wear A HAT?

I'll drink to that!

[when this show came out in 1970s American women were abandoning formal hats left and right...about the only ones who wore them were the "social x-rays" of the day...think Bonfire of Vanities women and you sort of have it.]
[song picks up tempo smartly]

"Here's to the girls who stay smart...aren't they a gas?"
"Rushing to their classes in optical art...wishing it would pass."

"Another long, exhausting day, another thousand dollars...a matinee, a Pinter play...perhaps a piece of Mahler's...I'll drink to that..AND ONE FOR MAHLER!"

"Here's to the girl who plays wife, aren't they too much? ...Playing house but clutching a copy of LIFE...just to keep in touch."

"The ones who follow the rules..and meet themselves at the schools..too busy to know that they are fools..aren't they a gem? I'll drink to them! Let's all drink to them!"
[slower tempo]
"And here's to the girls who just watch...aren't they the best..when they get depressed, it's a bottle of scotch...plus a little jest."

"Another chance to disapprove, another brilliant zinger...another reason not to move...another vodka stinger! I'll drink to that."
[The "I'll is really drawn out here! then uptempo again]

"So here's to the girls on the go...everybody tries...look into their eyes and you'll see what they know...everybody DIES!"

"A toast to that invincible bunch...the dinosaurs surviving the crunch...Let's hear it for the ladies who lunch"

This song always brings down the house. Women "of a certain age", especially ones who were expected to take care of all those social pretenses and just plain hard work and never got thanked for it all feel "sisterhood" on this one.

BTW, Sondheim is a master of interior rhyme...he also did the lyrics to West Side Story, Gypsy, Forum, and many others.

Anyway...long explanation...but it's all about those people who get stuck with the thankless jobs and never get thanked or appreciated properly....so when you said "Bloggers who lunch"....bingo...(granted only 1 of the 5 of you is a lady..but priests often get stuck with those countless thankless tasks the congregation never "sees." Until they need you personally. Sorry for the long post...but at least now you "Get it."

At any rate, you can listen to the infamous line at the Barnes and
Noble website:

www.barnesandnoble.com
Go to select "by song" type in
"Ladies who lunch" pick the ORIGINAL broadway cast of company
(it's a few selections down, with the light purple cover...1970..
And you can hear Elaine Stritch Utter the critical lines for yourself. (I tried to put the whole
correct link in but the blog tools you user "weren't having it." :-D

By some sort of voodoo magic, "they" have selected the exact 30 seconds needed!!! Spooky.