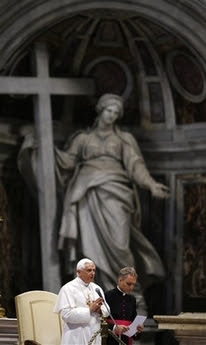 VATICAN CITY (CNS) -- Religious education programs should help people understand the doctrines of Christian faith, but also must help them integrate that teaching into every area of their lives, Pope Benedict XVI said.

Holding the 100th general audience of his pontificate June 27, Pope Benedict continued his series of talks about early Christian theologians, focusing on St. Cyril of Jerusalem, a fourth-century bishop.

After briefly greeting 6,000 pilgrims in St. Peter's Basilica, the pope moved into the Vatican audience hall, where he explained the treasure left by St. Cyril in "Catecheses," a series of lessons addressed to people preparing for baptism and to those who just had been baptized.

The pope said St. Cyril's text is "a model of an introduction to being Christian," one which addressed people's intellects, their experience and their behavior.

St. Cyril's catechesis was "profoundly biblical" and demonstrated the unity between the Hebrew Scriptures and the New Testament, demonstrating how salvation history began with creation and moved progressively toward fulfillment in Christ, the pope said.

In the early church, he said, "catechesis was an important moment inserted in the broad context of the entire life -- particularly the liturgical life -- of the Christian community in whose maternal womb, we can say, the gestation of the future faithful took place."

"This was an important moment; it was not a catechesis that was only intellectual, but a journey of learning how to live the Christian life always accompanied by the community," Pope Benedict said.

The communal nature of the candidates' formation, he said, helped them understand "they were entering into a large companion of travelers."

St. Cyril also explained to the candidates how the church's moral teaching was "anchored in deep unity" with its teaching about God and about Jesus Christ, he said.

"Doctrine and life are not two distinct things, but one journey of existence," the pope said. As a person grows in understanding the faith, he is prompted to transform his behavior to reflect his new life in Christ.

"We ask the Lord to help us learn a Christianity that really involves our entire lives so that we will be credible witnesses of Jesus Christ, true God and true man," the pope said.
at June 27, 2007