The Motu Proprio to be published 7th July 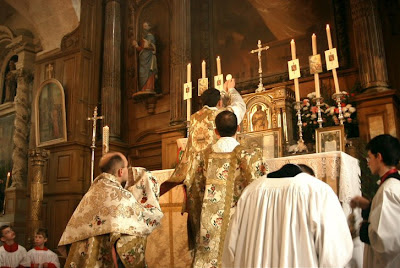 In our diocese I think that there are five of six places where, what do we call it now "The Missal of Bl John XXIII" is used monthly. One priest, I know, celebrates it weekly, early in the morning, on his day off, saying he needs it for his own spiritual health. I really can't imagine that many places are immediatley going to start celebrating the older rite, neither do I think that is the Pope's intention or even desire.


For me I see the Motu Proprio as a tool, a very important tool in the Pope's Mission.

For me personally, it's helpful in that it will help me feel that my love for the traditional liturgy (which I with many other converts share) does not automatically place me "beyond the pale" within the Church. It's been quite distressing at times.

Thank God.
I hope that more of our priests will say it locally, and that I could have a regular opportunity of attending the Classical Rite without having to drive for miles. Maybe if it could be done regularly during the week in the evening it would serve the need that is certainly there without any issues arising.

Let's pray for a fruitful interplay between both rites and that each will enhance the other for all our benefit.

" In many ways it is about a broadening of the Church, this is not unconnected, in some way with the reconcilliation of the Chinese Patriotic Church."

And the Orthodox Church too, Father. I agree with you it is in part about returning to an ecclesiology, an understanding of communion, of the first millenium.

It won't make the slightest difference in the majority of parishes universally.

Deo gratias! Oh the Te Deums that will be ringing out!