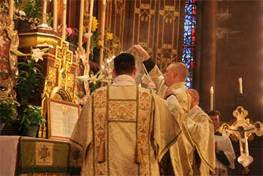 The Daily Telegraph has a story about the Cardinal, on behalf of the Bishops of England and Wales, sending a protest to Rome about the impending Motu Proprio. If you haven't been on other sites, apparently it is likely to be issued in the next few weeks, already it seems that the Curial Officials who will present it to the press are announced.
As always, the Bishops are saying "we are doing alright, thank you very much", I hate that smug assumption. My Lords we are not doing alright, have the humility to admit it! They claim that they are responding well to the requests for the Traditional Rite. Certainly here our Bishop is happy to have the Mass offered once a month by a visiting SSSP priest, when requested to allow it weekly, he wanted to wait for the Motu Proprio, elsewhere he seems keener on monthly rather than weekly celebrations.
The bishops say there is not much call for it. I think they have missed the point. For me, being a rabid 70s liberal with attitude there is a question of justice for those who want the Rite. Those closest to the Pope have said that the Motu Proprio is partly to make possible the end of the Lefebvrist "schismatic act" and to reconcile the followers of the late archbishop but also that it is an important part of our Tradition. For me as a non-Tridentine saying priest the Motu Proprio is important in that it underlines that the Church has a history and the Missal of Paul VI has roots not in the protestant bible service but in a deep and rich Catholic Tradition, it is the continuity of that which is important to me. Unfortunately I think that one of the reasons that "there is not much call for it", is an indictment of where we have moved to, that is something distinct from that Tradition.
The Motu Proprio is not just about allowing a few people to celebrate Mass in a particular Rite but rather a very clear statement that a Tradition that goes back two millenia is still valid, that is important in especially in Benedicts thinking about the Christian heritage of Europe.
One of the important strands of the Benedictine Pontificate is his commitment to the teaching of the Second Vatican Council, to the texts rather than that nebulous "Spirit of the Council", which the Pope considers lazy and very inadequate theology. Chief amongst the Council's "innovations" was the call to the re-union of Christendom, most especially with the East. The Greatest criticism of the Eastern Churches of Rome is its scant regard for Tradition, the Motu Proprio is one of those tools for re-union.
at June 16, 2007

The new style of saying the Mass must have contributed in some way to the decline of congregations.The eastern churches are packed and the Evangelicals are acquiring more and more buildings and filling them up.Even now we are using more Latin it is better,we are in danger of becoming too Parochial.

How wonderful to hear comments from a parish priest ready to follow the Holy Father rather than disloyal bishops.
Can't he be cloned and sent to other parishes?!