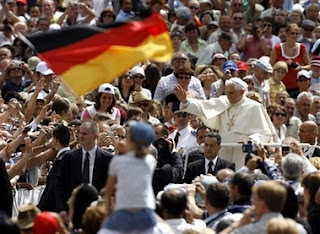 After the "Incident", the Holy Father then spoke about the G8 Summit, he is meeting George Bush later this week, and then about St Cyprian, the great 4th century African bishop of Alexandria

today's General Audience:
Rich countries must increase their aid to the development of the world’s nations in need, by upholding the right to education which is the real platform for progress among peoples; the Church knows this well from its lengthy experience at the forefront in this field. This was Benedict XVI’s appeal to the leaders of the worlds industrial powers gathered in Germany for the annual G8 summit which opened today. The Pope has asked those gathered in Heligendamm to “maintain their promises to substantially increase development aid in favour of the world’s needy nations, above all those in Africa”.
“Special attention – he continued – needs to be paid to the millennium goals: to access to basic education for all; the promise that by 2015 every boy and girl will be able to complete a primary school cycle. This is a fundamental factor in achieving all of the other millennium goals. It is a guarantee of the consolidation of the objectives to be reached; it is the starting point for autonomous and sustainable development”.Benedict XVI concluded by recalling that the Catholic Church “has always been at the forefront of education” along with “other Christian churches, religious groups and civil organisations”. It is a reality – he added – which in line with the principal of subsidiarity, the governments and international organisations is called to recognise, evaluate and support, also by means of adequate financial contributions”.
Before his appeal, delivered to the 30 thousand pilgrims and visitors taking part in the audience, Benedict XVI spoke of the unity of the Church founded on Peter, and of the “heart” as “the place where God speaks to man and man listens to God”.
The two themes were discussed by the Pope in light of his reflections on the figure of Saint Cyprianus, the next in Benedict XVI’s cycle of catechesis on the early fathers of the Church.
The Pope recalled that Cyprianus, the first African bishop to be martyred, was born in fourth century Carthage to rich pagan family. After a misspent youth he converted to Christianity at 35, an experience he described as: “A sovereign light spreading through my heart, a second birth”. As a bishop he faced the first two waves of persecution of Decimus and Valerian. After the particularly cruel oppression of Decimus, he strove to “bring about a return to discipline in the community”: many had renounced the faith or failed to maintain its precepts: “they were the ‘lapsed’, and fallen” who wanted to return to the community, divided by liberals and rigorists. Cyprianus foresaw the possibility of forgiveness after an exemplary penitence.
In his letters, the bishop from Carthage, “strongly affirms that the Church is one, founded on Peter. Those who abandon it elude themselves in the belief that they remain in the Church”. “There is no salvation outside the Church, those who do not have the Church as their mother, cannot have God as their Father”. “The unity which the Church finds in its foundation on Peter and the perfect realization it obtains in the Eucharist” are the inalienable characteristics of the Church.
at June 07, 2007

(A) Western tax systems bear disproportionately on the poor and landless in their own countries. So aid from governments is at the expense of the poor in the donor countries.

(B) There are plenty of wealthy people in "poor countries". The benefits of aid tend to flow towards the property-owning interests in poor countries.

(C) Many "poor" countries are rich in natural resources. If there are poor people in those countries the remedy is for them to do what is necessary to ensure a just distribution of wealth.

Aid should be from individuals to (carefully selected) charities whose administrative rake-off is minimal. Also charities should be selected so as to exclude those engaging in ill-conceived political campaigning but confine themselves to front-line assistance.