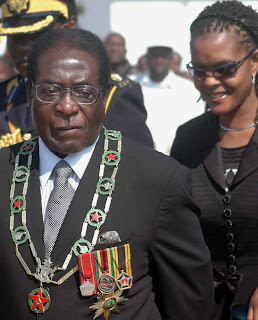 The ruling party militia, comprising youths and veterans of Zimbabwe's war of independence, are intimidating Catholics in rural areas, a United Nations humanitarian news agency reports.
The aim of the attacks is to stop the distribution of a pastoral letter denouncing President Robert Mugabe's rule. The Catholic bishops published the letter at Easter, but some rural parishes have still not received it.
Mugabe has dismissed the document (which received the backing of Pope Benedict XVI and Catholic bishops from around the world) as political nonsense. He told the New African magazine that in issuing the letter the bishops had chosen for themselves "quite a dangerous path."
The Archbishop of Bulawayo, Pius Ncube, said the attacks by militias are part of a strategy of intimidation ahead of next year's presidential and parliamentary elections.
"The Green Bombers [militias from youth training centres] are being used to go around striking fear in voters so that, come next year, they will be forced to vote ZANU-PF," Archbishop Ncube told Integrated Regional Information Networks, IRIN.
Catholics are being harassed throughout the country, he said, recounting a recent incident in the south-western town of Plumtree in which he had prevented ZANU-PF militias from gate crashing a meeting he was holding with priests in the area.
He said a priest was subsequently arrested in Wedza, Mashonaland Central, for distributing the pastoral letter while members of his congregation were also detained for questioning by state security agents.
Pedzisayi Ruhanya, a representative of the umbrella organisation for Zimbabwean nongovernmental organisations, The Crisis in Zimbabwe Coalition (CZC) and one of many human rights and church organisations condemning the harassment of Catholic parishioners, said the militias were responding to Mugabe,s tirade against the bishops.
"The situation is particularly disturbing when you take cognisance of the fact that the church is supposed to play a vital role as a watchdog against political and social repression, yet there are brutal attempts to undermine that," he said.
In Mashonaland East province, traditionally a ruling party stronghold, parishioners are opting to stay at home rather than attend church after militias threatened them for distributing the pastoral letter.
"They [militias] are accusing us of being members of the MDC [Movement for Democratic Change] and working to topple the government. It's no longer safe to worship because the militias treat you as enemies," said 55-year-old Tirivafi Haka, a lay church leader who declined to use his real name.
In Mutoko, Sheila Mukurazhizha, a 26-year-old youth leader, told IRIN about a similar pattern of intimidation. "Before the attacks on our members began, our church would record more than 200 people per service but now, hardly 50 people turn up on Sundays."
The church has responded to the tactics of the militias by issuing a statement: "We encourage every Zimbabwean to read the pastoral letter as a guide to understanding the source of our suffering and let it inspire our prayers and actions. We call upon every Christian individual and organisation to commit themselves to the truth of God's word about the situation and it is only the truth that will set us free."
Source: CISA
at June 06, 2007

Please pray for the Catholics in Zimbabwe - they really are under attack and it must be terrifying for them. The young thugs trained for the job are pitiless. And pray for the heroic Pius Ncube. Robert Mugabe is himself a Catholic and understands perfectly what he is doing.

Robert Mugabe's about as Catholic as Heinrich Himmler. In reality he's a Communist and took Chinese money and arms when fought the war of independence. He was a Chinese agent then and still is.

I'm glad to hear the University of Edinburgh has stripped him of his honorary degree, though he might demand to be made King of Scotland in compensation.