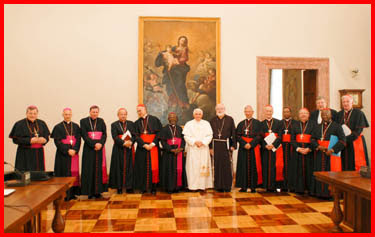 Cardinal O'Malley who has his own blog writes about to Moto Proprio as follows, the Archbishop of Westminster by the way also there, on the Pope's extreme left, interestingly Archbishop Ranjith, the Secretary of the CDW is on HH's righthand, I think it is Ranjith.

.... I flew to Rome at the request of Cardinal Tarcisio Bertone to participate in a meeting discussing the Holy Father’s Moto Proprio about the use of the older form of the Latin Mass. There were about 25 bishops there, including the president of Ecclesia Dei Cardinal Darío Castrillón Hoyos, the prefect of Divine Worship and the Discipline of the Sacraments Cardinal Francis Arinze, several heads of bishops’ conferences as well as some cardinals and other residential bishops.
They shared with us the Moto Proprio and the Holy Father’s letter explaining it. We also had an opportunity to read the Latin document. We each commented on that, and then the Holy Father came in and shared some of his thoughts with us. The Holy Father is obviously most concerned about trying to bring about reconciliation in the Church. There are about 600,000 Catholics who are participating in the liturgies of the Society of St. Pius X, along with about 400 priest.
A photo with the Holy Father after the meeting
The Holy Father was very clear that the ordinary form of celebrating the Mass will be the new rite, the Norvus Ordo. But by making the Latin Mass more available, the Holy Father is hoping to convince those disaffected Catholics that it is time for them to return to full union with the Catholic Church.
So the Holy Father’s motivation for this decision is pastoral. He does not want this to be seen as establishing two different Roman Rites, but rather one Roman Rite celebrated with different forms. The Moto Propio is his latest attempt at reconciliation.
In my comments at the meeting I told my brother bishops that in the United States the number of people who participate in the Latin Mass even with permission is very low. Additionally, according to the research that I did, there are only 18 priories of the Society of St. Pius X in the entire country. Therefore this document will not result in a great deal of change for the Catholics in the U.S. Indeed, interest in the Latin Mass is particularly low here in New England.
In our archdiocese, the permission to celebrate the Latin Mass has been in place for several years, and I granted permission when I was in Fall River for a Mass down on the Cape. The archdiocesan Mass is now at Immaculate Mary of Lourdes Parish in Newton. It is well attended, and if the need arises for an extension of that we would, of course, address it.
This issue of the Latin Mass is not urgent for our country, however I think they wanted us to be part of the conversation so that we would be able to understand what the situation is in countries where the numbers are very significant. For example, in Brazil there is an entire diocese of 30,000 people that has already been reconciled to the Church.
at June 30, 2007

I can't see the point of this MP. It looks such a climbdown and smacks of a personal defeat.

B16 should have simply issued a low key statement through the curia a year ago and then revisited the issue a couple of years later.

This has not been well handled.

Its not Archishop Rangith but Cardinal Arinze to the right of Cardinal Murphy O' Connor.

I was not suprised to see that Cardinal O' Connor and Lehmen were desperately using the dried-out excuse that the Jews are complaining about the MP. Of course, no notable Jewish spokemen has even voiced an opinion on the thing and I doubt they could care less.

You realize, Father Blake, that Cardinal Sean has put an outrageous spin on the Motu Proprio and the use of the induit in the dioceses with which he has been involved?

He is no friend of the TLM.

Andrew,
Isn't that Ranjith next to the Holy Father?

Cardinal O'Malley is the last person to admit that there is a real demand for the Tridentine Rite but, nevertheless, he is right to say that there is little demand for it in the United States. The traditionalist world is small but vocal and speaks loud and clear to persuade itself that pre-Vatican II Catholicism is only a whisker away. But it has gone for ever, as the Society of St Pius X knows. It is good of the Holy Father to relax the situation by permitting a free use of the Tridentine Rite but this won't persuade the hardliners that all is well. SSPX is a schism and schisms like to stay as they are. They have more to lose by returning to the Church than to gain. As for the rest, the forthcoming Motu Proprio is neither here nor there.

Is the impending liberalization of the Old Rite really so momentous for the Catholic Church?

We’ve just seen Pope Benedict issue a Motu Proprio which deals with the number of conclave votes required to elect a new pontiff, in which he has reversed a change made by Pope John Paul in a previous Motu Proprio, and restored the status quo ante.

If I were a bishop or liturgical director hostile to the liberalization of the Old Rite, wouldn’t I just filibuster for a few years in the hope that the next Pope will “reform the reform of the reform” by means of yet another Motu Proprio re-restricting the Tridentine Mass? Biding time is very much part of the fabric of Catholicism...

Francis,
No.
He is creating a groundswell, by reducing the authority of the bishop and raising that of the priest in this matter.
Geni's are hard to be put back into bottles.

As far as I know Archbishops wear purple don't they? There was an Archbishop from Liberville, Gabon that was invited to the meeting (one who is friendly to the Institute of Christ the King. I forget his name but he is the one standing next to the Pope.

Fr Ray - I agree with Francis and Gretel, nothing will come of this MP. It is a minterpretation to claim otherwise. Your own Bishop has said that further liberalising of the TLM would undermine Vatican II (I haven't got the quote). An astonishing statement when you consider that the last revision of the old missal was in 1962 but also a predictable one.

I am not sure SSPX are in state of schism - their canonical status remains open to debate. They fervently believe that Lefebvre will be canonised one day.

I'm afraid B16 has handled this badly and the MP is virtually meaningless. In that respect Fr Reggie in Rome was right all along that following the problems in Poland and Regensberg, B16 would avoid controversy.

Bad times these for the papacy.

We have another 30 years of chaos and decline left according to Bishop Fellay of SSPX and I supect that he is just about correct. It's a shame for people of my age as it means that we are going to go our deaths without the TLM widely available and actively encouraged by a local bishop. Perhaps more importantly, in the light of Fellay's prediction, I shall be lucky if there is priest available to say any type of Mass at all.

The TM is not something that overly bothers my own bishop, because of the lack of numbers of people who ask for it.
He has made few statements about it, I have not seen a statement about "undermining Vatican II", it seems to lack his normal nuancing.
It has certainly not been an issue in his allowing the TM here.

Hermione is somewhat misinterpreting me by implying that I don’t think anything will come of the Motu Proprio restoring the Old Rite.

My point is that positive changes in Catholicism often have a very long gestation period as they are frequently the subject of politicking within the Church (for example, think of all the years we have been waiting for the improved ICEL translations).

I do regard the MP as a highly significant development, but I think it will have a long lead time. There is bound to be filibustering by those in authority who dislike the MP because it stems from an interpretation of the true meaning of Vatican II which is at variance with current “liberal” thinking in the Church. It’s part of the continuity vs. discontinuity, change of style vs. change of substance debate which will grind on and on.

There is also the chicken and egg issue. A large proportion of enthusiasts for the Old Rite aren’t older people who pine for the reverent liturgies of 40 years ago, but rather are younger, post-Vatican II types who discover the TM for the first time and fall in love with it. The trouble is that if there is filibustering and limited supply, the number of younger people who are able to access the Old Rite, become enthusiastic about it, and ask for more of it won’t be that large.

Francis - sorry pal but you sound like you are agreeing with me. Define a "long gestation". Would the biblical "forty years" do? How about joseph's "30 years" i.e. the figure in his blog? My suspicion is that Benedict has played this incorrectly. He should have secured New York & Westminster first (as a minimum) got rid of Levada and then appointed a genuine enforcer. This Burke chap over in St. Louis looks a bruiser - surely he has a role to play.

Ms Hollis,
The temptation to get into discussion along those lines would be sinful. I don't want to go down that route, therefore I have rejected your comment.

The forthcoming Motu Proprio will merely be a nine days' wonder. If you ask the average Catholic what the Tridentine Rite is most won't know.

I think, as Fr intimated in an earlier post the MP is not really about the Trid. Mass but about redirecting the liturgy and theology of the present day.

"... the MP is not really about the Trid. Mass but about redirecting the liturgy and theology of the present day ..."

How will this process occur?