Yesterday I went to the ordination of Dominic O'Hara at Redhill, it is the most hideous buiding, nasty sanctuary furnishings, Blessed Sacrament in one corner, organ given more prominence in the other. Some woman who took the place of a deacon and acolyte in preparing the gifts on the altar wearing an alb, a deacon manque but apart from that the liturgy was quite good, mainly because of Dominic and I think the rather splendid M.C. Gerrrard Hatton, who tells me he is an avid reader of this blog. I was rather surprised by the "celebrity", but thank you for the compliments Gerrard. 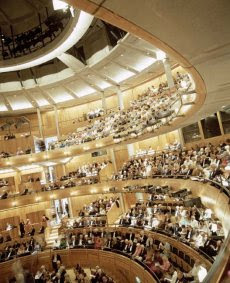 The night before I went to Glynebourne, Verdi's Macbeth, whole choruses of weird sisters coming out of caravans! Banquo's ghost was a cardboard box, in which his head had been, which followed Macbeth around, a good application of Ockham's razor, "less is more", very clever, there was a damning review in the Spectator, but I thought it was wonderful. Verdi treats everything except the last act as a bit of a joke, the music is fun, comical even, which makes the last act very poignant. Anyhow there is another visit to look forward to in which I am someone's guests, and then the Festival in Verona, which precedes the ordination of Aaron Spinelli to the diaconate in Rome - God is good!
at June 02, 2007

I went to that. I thought Dominic did well to (a) get to this point and (b) to achieve an inclusive liturgy in a "progressive" (ie stuck in the 1970s) parish.

Would be great to see some photos of Glyndebourne, Father. Years ago, when I was at school in Bexhill, the music students were taken every summer to Glyndebourne to a dress rehearsal in the afternoon. It was exactly like a performance, even with the long interval and picnic. The first opera I ever saw was there - and it was Verdi's Macbeth. I think I still have the programme somewhere. I seem to remember it being a rather more traditional performance though! Amette

On the subject of women illicitly wearing albs, my previous parish priest (here in Canada) sanctioned the wearing of albs by all the eucharistic ministers, male and female.

His recently appointed successor has abolished this practice. There is a rumour that he informed the indignant "de-frocked" ladies that the alb made their bottoms look big -- which apparently reconciled them to the change in an instant!

Francis,
As girls and women are now allowed to serve, at an individual priests discretion, wearing an alb is not an issue, especially if one sees it as the baptismal, rather than priestly garment.
May problem here was that she placed the gifts on the altar, and I think mixed the contents of the chalice with water, a task reserved for the deacon at Mass.

Your story reminded me of the death of a lady whose last words to her sister were, "Tess, I have been meaning to tell you, when you bow on the sanctuary your skirt goes up and every one sees the purple veins at the back of your knees".